Libya is once again under the spotlight in the United Nations Security Council as two separate resolutions were adopted calling for an immediate and unconditional ceasefire and extending the UN Mission, UNSMIL, until September 15. This, in a country living at peace and in prosperity until Messrs. Obama and chief poodles Cameron and Sarkozy went on an imperialistic venture. 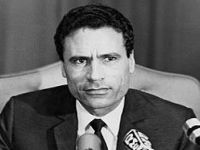 Until the end of 2010, when the French started settling into Benghazi stirring up trouble, the Jamahiriya Government had managed to establish a system of government supported largely by between 85 and 88% of the population (apart from the racist Libyan elite who wanted the spoils for themselves). Libya was at peace with its neighbors and enjoyed the highest Human Development Index in Africa.

Today the country has at least two governments, one in Tripoli and the other holed up in the East, virtually every major city has its own brigades of armed youths and the entire country has slipped into utter chaos, crawling with terrorists, including Islamic State, right on the frontiers of the European Union.

Women's rights have disappeared, children's rights have disappeared, basic freedoms have disappeared, such as being free to go to the bakery to buy a loaf of bread without being robbed, or decapitated. "Grave concern" has been expressed by the United Nations Security Council about Islamic State, or DAISH (ad-Dawlah al-Islāmiyah fīl-ʿIrāq wash-Shām) in Libya but also "all other individuals, groups, undertakings and entities associated with Al-Qaida", also present in Libya, when Muammar al-Qathafi was the first international figure to issue international arrest warrants for the Organization.

While al-Gaddafi (Libya), Al-Assad (Syria) and Saddam Hussein (Iraq) were fighting these terrorists, the West was funding them, aiding and abetting them, cavorting with them, meeting them, arming them and creating the conditions for them to exist.

The existence of these groups in Libya is, as is the case in the other two countries mentioned, a direct result and consequence of short-sighted and criminal western action which has to date gone unpunished. Indictments against NATO and its political and military leaders, such as the one I drew up with others in 2011, were not even given the courtesy of a reply (*). And their existence poses a direct threat to the peace and stability of the citizens of these countries going about their daily lives, as indeed they were before the USA, the UK and its friends and allies decided what was "better" for them. Then when there are terrorist attacks on their territories which are paltry in comparison with the daily carnage in their victims' countries, they complain.

Continued encouragement of dialogue among all groups which denounce violence, but this can only be a complete process when the Jamahiriya and Green resistance is part of the scenario, given that most Libyans would tomorrow vote for a return of the Jamahiriya Government, which was based upon communities deciding on their needs, reporting these to People's Congresses and the Government answering these requests.

The UNSC has condemned "the use of violence against civilians and civilian institutions and the continuing escalation of conflict, including attacks on airports, State institutions and other vital national infrastructure and natural assets, the Council called for those responsible to be held accountable".

Suppose it held accountable those mentioned in the indictment below, those who started the problem in the first place?