Growing demand means that water withdrawal is set to increase by around fifty-five per cent by 2050, while today, already twenty per cent of aquifers are being over-exploited, some at a critical level. Groundwater supplies, the primary source of drinking water, are decreasing. At this rate, we can speculate when the first water war will break out. 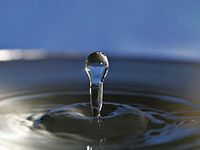 Many of the main arteries of transportation in cities were once waterways. People travelled along these in boats and canoes and businesses were set up on either side. London's Fleet Street was once the River Fleet, the Strand was once the River Strand. We are not speaking only of London. In Lisbon, Portugal's capital, Sete Rios, now a transportation hub, was once a convergence of seven rivers, many of the canals flowing into the Tigris and Euphrates Rivers in Iraq have long since dried up, the Los Angeles River no longer exists. The list goes on and on.

We all know what happened to the water on Mars: it dried up.

Manufacturing is causing a 400-per-cent increase in demand for water resources, while domestic use is projected to rise 130% over the next 35 years, while abstraction of groundwater is increasing by between one and two percent per year. 30% of this groundwater is immediately available in liquid form, while the remaining 70 per cent is frozen in glaciers and ice caps.

While it is difficult to make an exact assessment of exactly how much water the Earth holds, due to difficulties in collecting reliable information on exactly what happens to the water extracted (if it is properly managed it can be reused) and how much there is in flow, it is known that in the last one hundred years, water withdrawal has increased by nine times, while per capita use has risen fourfold.

70 percent of water is used for irrigation, 20% for industry and 10% for household consumption - as the population grows, the quantity of water needed to produce food will increase. At least 55% of all groundwater is estimated to be in use at present but part of the remainder is already polluted. 20 per cent of freshwater fish species worldwide are under threat of extinction because of the construction of dams and withdrawal of water from the ecosystems in which they live.

Attempts to alter trends artificially have shown to be disastrous in some cases, while approaches such as cloud seeding (filling clouds with chemicals to make them rain) and attempts to alter evapotranspiration trends by manipulating planting practices often produce very limited or negligible results.

The Dublin Conference in 1992 asserted that "it is vital to recognize first the basic right of all human beings to have access to clean water and sanitation at an affordable price" (ICWE , 1992). However, its distribution is far from equal. Per capital water withdrawal in the USA is over 400 liters per day, 200 liters of which is used for irrigating lawns and gardens, while today in 2015, one point one billion people continue not to have access to safe drinking water.