The Righteous Road to Nilopolis 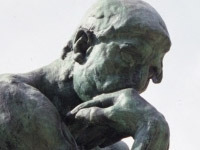 I have a confession to make. I, dear reader, am a sinner - a collaborationist, in fact. You're aghast, but it's true.  For there is almost nothing anyone can verbally exclaim which, absent physical violence, will cause me to forever shun them or demand their immediate extrication from the human race.

Oh, there are plenty of things people say these days with which I disagree. Many of our multitudes are coarse, ignorant or simply wrong in their thinking. However I will tolerate the prattle of a thousand fools before I assent to silencing a one of them. Because, and this is a secret between just you and me, occasionally some of the individuals I consider foolish reveal themselves to be otherwise indispensable.

The matter is of serious import because recently at the University of Oklahoma, in "freedom-loving" America, President David L. Boren distinguished himself as something worse than a fool in response to a transgression of acceptably ordained speech.

Some very young and obviously immature students on a bus sang an unkind song about minorities. They didn't sing it at anyone, hence it was not a threat; merely chanted it amongst themselves. I don't personally approve of their sentiments, but neither do I approve of most rap "music" either.

Still when a video surfaced many panties were wetted, not least among them President Boren's.

Rather than maturely disassociating his administration from the offensive words and stating an internal review would commence Boren chose self-righteous denunciation and cheap melodramatics. He summarily (and illegally) confiscated the students' residence, enacted collective punishment (a war crime, incidentally) and vocally stated (before any due process whatsoever) these youths did not belong in Oklahoma while further implying they do not belong on planet Earth.

Abjuring respect for (and basic understanding of) his University Constitution as well as the Constitution of the United States, Boren was "willing to take the risk" of behaving as a Pontificate-Gone-Wild. Of course, that really isn't particularly shocking for most current and former U.S. Senators.

Whereas it would have been perfectly appropriate as well as proper to condemn the juvenile antics of these boys it was the height of post-modern arrogance to deny their very inclusion to humanity. For if there is one thing all humans have in common it is there is (and has always been) some other group of humans they don't like.

Sometimes harshly, frequently casually, intermittently irrationally; we love to loathe. Oh fellow men, how do we hate thee? Let us count the ways...

I arise in the morning to the screech of my alarm, and don't you know it's a hater? It must be, it's made by Sony...which is Japanese...and if you ask any random Japanese about the Chinese you'll get quite an earful. Statistically at least one worker on the assembly line felt this way at the time he made my clock, so even before I'm out of bed I'm the beneficiary of unadulterated hatred and racism.

Shaking it off I walk to the closet to get dressed, pull out a shirt at random and am confronted by more hate. It's from Chanel; the one who was at best lover of a Nazi spy during the war and was at worst a Nazi agent herself. Talk about the hate! Perhaps I'll wear Hugo Boss instead? Maybe not. Donna Karan, Versace, Céline, Louis Vuitton, Alexander McQueen, Calvin Klein, BCBG or Prada? Nope, all expunged due to "racism ad infinitum." Looks as though I'm off to my employment in the nude.

Now I'm not only the recipient of wakeful hate I'm stripped bare. Well, a man has got to be politically correct whatever the cost. Unfortunately he also has to eat. I deftly leave the house to enter my car, and rather awkwardly find...it's a Ford. At this point I'm trying to figure out not only how to arrive at my office, but how far back in time one must travel not to be tainted by intolerance? Evidently, terribly far.

A nascent proto-type of the steam engine can be traced to Greeks and those ancients owned slaves! No, not the black kind (which we all know are the most damning); but slaves nonetheless. Perchance I can utilize one of the new battery powered cars? Unfortunately, some clever Iraqis may have developed the first galvanic cell. They're still fighting with neighbors after twelve hundred years, which I don't know if qualifies as general "hate" though it doesn't sound like love to me. Alas, I'm walking to work au naturel.

By this point it seems people are ogling me awfully strangely and it's making me self-conscious...until I realize they are actually disgusted by the bigoted building in which I labor. Horror of horrors - it's neo-classical. Why, that's nearly the same as being an Imperialist and almost as atrocious as being some colonial governor of the 19th century. (Let us not begin on the racism of Romanesque edifices!)

At once I resolve to immediately contact a realtor for relocating to a non-descript biodegradable square hut made of mud the same as our stone-age antecedents or modern-day Africans inhabit.

Since I obviously can't be witnessed entering my "derogatory" workplace I ramble over to the Art Museum. Although I feel enlightened (or is that merely the cool sensation caused by not donning undergarments) I think my mind could use some edifying cultural reconstruction.

Scrupulously avoiding the Old Masters (the word "master" is now verboten) I begin at the Dawn of Devolution - with the Impressionists. Sadly I soon realize they were mostly chauvinists. Renoir? Hated motorists. Degas? Hated bankers. Picasso? Hated women. Van Gogh? Hated everyone. Only in the wing inhabited by our progressive era of blobs and blotches without form or structure can one relax.

Feeling liberated from the hoary standards of line and form I gaily bound down the steps and across the street to the Music Hall where I hope to pass away the remainder of my free-thinking afternoon. Yet more hate awaits. Bach, Mozart, Chopin, Stravinsky, Wagner and dozens more - all haters. Granted, they didn't hate the some people but they all hated various groups and these days every group is sacred.

Having had enough of this nonsense I amble home in the dark fuming with rage. Upon arrival I grab my computer to type this article and...yes, you already know. The recently deceased Steve Jobs was widely (in fact, very widely) regarded as a tyrant. He routinely belittled, harassed and denigrated employees on a daily basis. His hate was almost as expansive as his entrepreneurial spirit.

Finally it caused me to cogitate perhaps every worthwhile endeavor in history is stained by the hand of those believing they were better than someone else. Nevertheless it was undoubtedly those same hands of our collective "hate-filled" ancestors which pulled us from muck. If we excise everyone who ever thought poorly of anyone else we will be in a sorry state and living in places found not only in fiction.

I've glimpsed where our current pathway leads and it is to Nilopolis; the place where everything is nothing.  It has other names with which some of you may be familiar. One of the most recent was China circa 1966. This was the height of its cultural cleansing. All the old gods, old traditions, old art, old books, old architecture, old fill-in-the-blank was evil and had to be sanctified to greater goodness.

Naturally this did not stop at old things but included old people as well. As a matter of fact it also included young people who shared some of the old ideas. They all had to go and go they did, into a giant yawning chasm of destruction and death. Now the only place to find choice Chinese antiques is abroad.

The crucial facet to remember should you find yourself living in Nilopolis is what is unacceptable changes almost hourly, thus conveniently ensuring a constant stream of things (and persons) to crush. When particular thoughts are no longer allowed, the entire sphere of allowable thought exponentially condenses. Just make sure to equally abhor the latest alleged "haters" along with the elder hateful standards and you may escape with your life. When in doubt, denounce everyone.

Tragically America and the West are showing signs of this same madness. Talent, logic, achievement and beauty are all becoming subordinate to the Unchallengeable Ideal. What is that ideal you ask? That there are no ideals! For there can be no ideals when every aspect is equal. Only a broad stretch of blandness which streaks across the horizon and smears out anything that might stand above the plains.

Those who bettered or saved the lives of millions have been and seemingly will be sacrificed on the pyre of un-personhood by the few inconsequential dolts upon whose tender egos they trod. Ability is negated by any appearance of impurity. A more perfect farce for anti-civilization can scarcely be imagined.

Still leaders in the United States are attempting it. Use of proverbial "bad words" is now the ultimate arbiter of everything American. Denial of work, denial of earned benefits, denial of service and impending denial of citizenship are steadily making their way to Anytown, U.S.A. (Even your television can hear and confess upon you.) Its Evangelists for Equality ignore the truism interpretation of "The Truth" ever becomes increasingly restrictive and have learned nothing from experiences of the past.

Only fools (and Western governments) believe opinions of the present are an apotheosis of all human attitudes. Any who doubt me should do themselves the favor of writing the top twenty things they "know" are true today, seal them in an envelope and address it to their great-grandchildren. The sender may not be there, but when the missive is opened decades hence he'll be enshrined as family comedian.

We are wrong in most of our assurances because such is the state of an imperfect mankind.  Expecting, or demanding, any individual be unblemished is a recipe for disaster and inevitably costs us our greatest talent for all of us (especially the geniuses) are flawed. Barring, no doubt, David L. Boren and his growing posse of like-minded inquisitors who decide which of us belong to permissible personhood. (One hopes Anonymous, which relishes humiliating the Holier-Than-Thou, does not become interested in ensuring Pontiff Boren has never written a heretical phrase throughout the entirety of his own life.)

The future of America is the past from Abroad. Under those circumstances I think I prefer not to be counted among its pristine number in their burgeoning antiseptic dump of banality. I'll eschew Nilopolis and make do with "haters" such as Beethoven, Breker and Dickens whilst I dine on un-politically-correctly named Steak Tartare and luxuriate at the divinely undemocratic Hotel Astoria.

It's a tough life being an unrepentant discriminator, but equality is the death of the exceptional. A man who doesn't distinguish doesn't feel; and creation comes from feeling. Beside which, when a passionate transgressor calms and apologizes (of his own accord, not from coercion) so much the more does he prove himself worthy. Some of my best friends started out by calling me a bad name. And what of it?

To err is human, to forgive is divine.

Guy Somerset writes from somewhere in America. He is a lawyer by profession.