Ukraine cease-fire: How about a Saturday-Night-Live 'Spiv' to extend it? 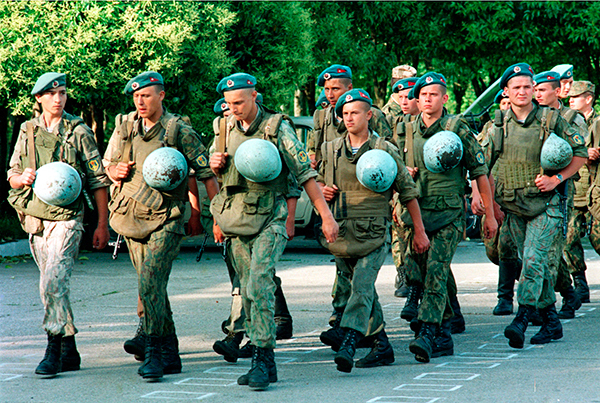 "A cease-fire just gives everyone time to reload," said a famous American late-night TV host some years ago. He was alluding to a confrontation a world away when the usual combination of patriotism, bravado and high testosterone levels-always used by global-resource exploiters-to force military minions to annihilate whatever stands in their way: soldiers, civilians, governments, buildings, infrastructure, farm lands, and clean waterways.

It is certain that the global Machiavellian billionaires who set up the Ukraine debacle-living in baronial splendor-are frustrated by the cease-fire hammered out in February at princely quarters in Minsk, safely 732 miles from the war zone. They want those "caissons" rolling so that the land will be cleared of buildings and people interfering with stealing its agricultural and fossil-fuel resources.

They are unconcerned that media reports of more than 6,000 soldiers and civilians have been killed, and hundreds taken prisoner. And that millions have been displaced. That food and water shortages are widespread. That electricity is non-existent for thousands. That medical help is minimal. Or that spring planting of grains in this continent's "breadbasket" may be impossible.

But these "disaster capitalists" (as author Naomi Klein calls them) will care a great deal if media begins playing up that two years ago Chevron and Shell gave a collective $20,000,000 to the Kiev government to frack for natural gas in its shale areas, the former in the west at Olesska and latter, in the southeastern gas fields at Yuzivska.

The last thing these global barons want is an extended cease-fire of the Korea variety (which has lasted 63 years). Unlike that agreement's self-enforced isolation of North Korea, the Minsk cease-fire does not cut off Ukranians or "Novorossians" from continued crossing lines for commerce, travel, employment, or visiting family and friends.

In short, their mutual survival depends on actions extending the Minsk cease-fire by any and all means possible despite these "disaster capitalists' plans for their decimation and subjection. No action, however untried or untypical on the surface, should be ruled out at this point by their intended victims if the overall aim is to outwit and outlast the fossil-fuel exploiters via a lengthy cease-fire. Fresh ideas could save lives, property, employment, trade, land/air/water destruction in the area-and treasuries of all governments involved.

One seemingly strange action might be admitting Apple teams into warzones, accompanied by cease-fire monitors, to sell those $49 iPod units at cost to soldiers and their families/friends-with discount-price coupons for the next version.

Ridiculous? Not at all. To load gigabytes with even 500 favorite songs-not to mention learning iPod's dozen other functions and using them all-would keep soldiery occupied for weeks.

Consider the heavy focus on music by civilians with iPods seemingly oblivious to the outside world, even at the wheel of a vehicle or at meals.

Since their 2006 introduction, Apple has sold 338,860,000 whether priced at $300 models or $49-with even lower prices expected when the seventh version debuts. Like the rest of the world, hundreds of Ukrainians and Novorossians late last year rushed to buy the latest iPod on the market.

The second action to achieve a lengthy cease-fire costs nothing, is readily available because it is embedded in the human soul no matter the  nationality, tribe, class, or gender.

The action: Getting both armies to sing, followed soon after by civilians.

If "music has charms to soothe the savage breast, to soften rocks, or bend a knotted oak," as poet William Congreve observed over 400 years ago, no wonder one human voice joining others has had the power not only to overcome horrific adversity, but also to comfort and uplift souls, hearts- and perhaps even minds.

Singing and the Military

Such music excludes military marches because while keeping soldiers in step, its purpose from antiquity to today has been to glorify, encourage, and support killing, rape, pillage, and destruction for the Machiavellians safe in the rear. Far more important, a march's four-four beat tempo or the trumpet's piercing sound are unlikely to wind up in the hearts, souls, and minds (or iPads) of armed forces. Or civilians.

In the American Civil War, for example. "Dixie" and "Yankee Doodle" were unlikely to be sung around campfires. Despite harsh penalties for fraternizing with the enemy, officers had great difficulty halting night-time harmonizing across-the-lines. They sang songs about separation from loved ones such as the hugely popular "Lorena" and "Kathleen Mavourneen," and religious selections. Many began to sing in TTBB parts (first/second tenors, baritone, bass). One song reducing even hardened warriors to tears-privates to generals- was "Home, Sweet Home."

By World War I, officers gave up disciplining German and Allied troops from fraternizing on "Silent Night" during the 1914 Christmas truce. In WWII, it was collaborative voices on "Lili Marlene." Music unified friend with foe, perhaps only to the last bar of a song, but the feeling of commonality left its mark. Left to their own choices, soldiers usually sing songs about common themes: sweethearts, home, and an end to war.

Such music has scarcely been confined to battlefields.

Group Singing in Other Settings

Yet group singing has scarcely ever been confined to war. Done by captives-slaves to prisoners-it has lifted spirits from despair amid brutality and certain death perhaps ever since the advent of internment. Those in Rome's Coliseum during the first century are said to have linked hands and sung as wild animals tore them to pieces. Slaves, galley oarsmen, and convict chain gangs always have sung together, finding collective singing made survival endurable each day. Verdi's opera Nabucco immortalized this response by the soaring chorus of "Va Pensiero, Sull'ali Dorate" ("Fly, Thoughts, on golden wings").

One of the most singular POW choruses-inspiring the film Paradise Road- was the Vocal Orchestra of 30 women in a WWII Japanese island prison camp off Sumatra.

These events evolved into a Vocal Orchestra. Thirty voices became four orchestral sections: "first and second sopranos and first and second altos to 'sing' the notes of the first and second violins, viola and cello." They rehearsed in secret lest guards cut vocal cords-or do worse. The result was a December 27, 1943 concert condensing works by Dvorak, Chopin, Debussy-and ended with "Auld Lang Syne. Even the guards applauded. It renewed prisoners' "sense of human dignity" and willingness to live.

But, then, singing is instinctual, endemic in the soul of most creatures-birds to whales, elephants and dogs to humans-especially when undergoing stress and losses.

Babies never touched, rock and hum to ease rejection or desertion. University alumni eyes brim with tears at reunions when rendering the school's alma mater either in unison or SATB parts (soprano, alto, tenor, base). Alzheimer patients may not remember anything or any one, but are letter-perfect in singing favorites learned from childhood or adulthood. Mozart died singing tenor to the "Lacrima" portion of his Requiem Mass with family and friends (maybe even arch-rival Salieri) around the bedside. "Sing-a-Long Messiahs" pack auditoriums with those who mastered it as teenagers or as choristers.

Group singing also links people in monumental causes, particularly uprisings of the downtrodden. People relish the similarities and ignore differences-off-key pitch or a missed note. The stirring "La Marseillaise" of the French Revolution stemmed from Parisian rage after centuries of oppression and poverty to finally overthrow royal government, the nobility, their toadies, and the Catholic church.

Songs far less sanguine have included America's "Solidarity Forever," "We Shall Overcome" for civil rights, Occupy, and environmental activists. And millions opposing the Vietnam war-and today's U.S. secret wars-sang the haunting "Where Have All the Flowers Gone?"

So how can group singing extend the Minsk cease-fire?

The combatants have inherited a common repertoire of folk songs. As one writer described the region's music:

Traditional...songs show not only the talent and mastery of composing, but reveal the general characteristics and qualities...in broad terms. Numerous family traditions and rituals, relationship between family members, places and lands where people lived are vividly depicted.... [N]o domestic or harvest or any other work was done without singing corresponding songs.... All this created an incredible atmosphere that helped people to enjoy everyday life and overcome any difficulties or tough times.

In group singing, whether around an army campfire or family hearth, no need of a conductor, for whenever two singers get together, one inevitably leads tempo and treatment.

Each regiment or company always has a standout tenor who may not be a Pavarotti with a powerful chorus as in "La Ghirlandeina." But he certainly will do. And troops may not have a bandura or accordion among them-or violin, flute, drum, zither, harmonica-but a cappella voices need no knapsack.

So How About a Saturday-Night-Live 'Spiv'?

What if both armies ended each week with a "Saturday Night Live Sing" (a "Nich Suboty Spiv") along the cease-fire line from Luhansk and Donetsk to Mariupol? If those Sumatra sing-a-longs were a week's highlight, they'll do the same for these men and women on these front lines.

Those yearning for TTBB singing, pre- or post-Spiv section rehearsals could stage a monthly concert athwart no-mans-land-rain, snow, or sunset-for choral works by Mozart, Brahms, Puccini, Rossini, Grieg, or today's master, Morten Lauridsen. Free sheet music for parts is online. (Until territorial issues are settled, it's probably best to give Russian and Ukrainian composers a rest.) If SATB is wanted, local women could practice in homes or churches and be given safe passage to participate in performances.

So why not a "Saturday-Night-Live Spiv" until economic and annexation issues are settled? If the cease-fire could be extended for even two years, it might rid the region of global corporations seeking to plunder the region's rich resources until they run dry. Even in that short time frame such exploiters may go bankrupt either from fracking's ruinously high production costs and low sales prices-or the spectacular spread of alternative energy sources such as solar, wind, or hydroelectric power. By even a year's cease-fire, Monsanto's plans to seize lands for "agribusiness" with their genetically modified crop yields, pesticides, and fertilizers would be unmasked for wrecking agriculture and poisoning consumers.

Both sides live in the shadow of Chernobyl, dead from radioactivity since 1986. Most know resumption of hostilities could escalate into a dead planet-or a local war's lifeless region. It is in their mutual interest-troops and civilians-to do their utmost to extend that cease-fire. A good and economic start-never tried in any war-might be as simple as a weekly "spiv" across battle lines. But the upshot of one in these perilous times could be a "nuclear winter" ending all life on this planet or, at the least, global corporatists stripping the region of its riches like the colonial powers of old.

Because music does have the power to soothe the savage breast and could prevent either fate, what could the belligerents lose by at least trying a "Nich Suboty Spiv"? And maybe sing on and on-and on!

Barbara G. Ellis, Ph.D., is the principal of a Portland (OR) writing/pr firm and a professional writer. A long-time journalist (LIFE magazine, Washington, D.C. Evening Star, Beirut Daily Star), she was a journalism professor (Oregon State University/Louisiana's McNeese State University). She's written dozens of articles for magazines, several books, and was a nominee for the 2004 Pulitzer Prize in history (The Moving Appeal). She is a contributor to several American websites and also op-ed articles for The Oregonian and the Portland (Oregon) Tribune.