Libya: Time for naming and shaming

The total chaos in Libya is the direct result of military intervention by the FUKUS Axis (France-UK-US) in the internal affairs of a sovereign state. Those responsible for this situation must be prosecuted for their crimes, including war crimes and crimes against humanity. Their names are Obama, Clinton, Cameron, Hague, Sarkozy, among others. 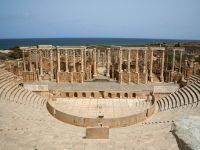 In 2011, Libya had the highest human development index in Africa, it lived at peace with its neighbors, women had full rights and the Jamahiriya system of government based the extremely complex tribal society on small groups, local government entities which reported to councils connected to the State which catered for their needs and answered their requests.

Then what happened? The French installed themselves in Benghazi in 2010 preparing the revolution which is fact was carried out by "the bearded ones" (the Islamist fanatics from Benghazi) and foreign terrorists. The result? See the indictment below. Girls were raped, boys were impaled on stakes, properties were destroyed, banks were ransacked and looted, women had their breasts sliced off them.

The students who had had their studies paid for abroad saw their subsidies cut and had to choose whether to go tome to a NATO-inspired hell-hole or else seek political asylum abroad. Today there is not one city in Libya living in peace, neither is there a government, The country is in chaos.

Indictment against NATO for the Libyan catastrophe

Those who are responsible for this gigantic foreign policy disaster are today sitting prissily in their offices thousands of miles away. Suppose someone for once actually did something about it and held those responsible to account?

Remember, I will be long dead before history judges our generations but documents such as these will live for posterity. It is illegal to destroy a sovereign state and to deploy military hardware against civilians and civilian structures. The Jamahiriya State of Libya was destroyed by the USA, the UK and France, illegally. There was direct interference from troops on the ground, contrary to UNSC Resolutions 1970 and 1973 (2011).