Togetherness, not division, is the way forward

The much-vaunted collaboration between the Russian and American and later, European, Indian and Chinese space agencies demonstrates clearly that pooling resources, presenting an egalitarian approach and practicing togetherness can make great strides towards solving mysteries and preparing a common well-being for Humankind. 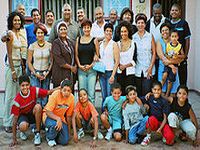 The key to a collective future which creates a worldwide society in which we can all share our common space - the beautiful home that Mother Nature gave us - is togetherness, not division, it is development and not deployment. The UN initiative Every Woman, Every Child, described in the recently launched report Saving Lives, Protecting Futures, is witness to this approach, meaning that preventable deaths of women and children could be a prevented within 20 to 30 years.

In fact, the Every Woman, Every Child is the fastest-growing partnership initiative in history. In the words of UN General Secretary Ban Ki-Moon, "Because of our collective endeavor, more women and children are surviving than ever before. Since 2010 alone, the world has saved the lives of some 2.4 million women and children".

The partnership has been run in forty-nine countries and has prevented mother-to-child HIV transmission, increasing availability of oral rehydration therapy for treating infant diarrhea, promoted exclusive breastfeeding and post-natal care for women. Professional maternity care, family planning, childhood vaccinations, and prenatal care are also more widely available. Sixth billion dollars were made available by the partners in the initiative and as a result there have been over one thousand innovations implemented since 2010.

The partners are governments, organizations, foundations and businesses, civil society institutions and also the players involved in the target 49 nations.

The report Saving Lives, Protecting Futures highlights that "The movement has helped strengthen high-level political commitment, mobilize resources, focus attention, consolidate efforts and bring people together to produce global results" adding that "the movement demonstrated the value of an agreed accountability framework against which all commitments have been measured. It showed the power of innovation to develop and implement new solutions".

For the future, it is intended to continue to pool resources to eradicate preventable maternal and under-five deaths using existing and affordable healthcare practices. To this end, it is intended to increase vaccination programs, provide care for pneumonia, strengthen healthcare systems, improve universal access to healthcare. The report remembers the Ebola Virus Disease outbreak over the last year in west Africa, in which women and children especially had poorer access to healthcare programs and treatment.

This is another example to where togetherness can work. It does not matter who the individuals are, or where the businesses and organizations come from. Many countries provide aid and then brag about it with flags on sacks of cereals and TV "Look what we are doing" campaigns, while insinuating that other countries, whose culture is to give anonymously and get on with the job do nothing, which is simply not the case. The first in the field after the Indonesia tsunami were the Russians - unreported in the western media; Russia's massive contribution towards facing the Ebola outbreak has also gone unreported, Cuba's massive healthcare coverage around the globe (as well as the Cuban literacy program) falls on silent ears.

This does not mean that the actions are not valid, it proves that all of us wish to create a global society based upon common human values which work for all towards creating a better place in which we can live as brothers and sisters around our common lake, the Seas.

It is a pity that some members of the international community continue to pursue imperialist acts of intrusion, removing Governments which are unfriendly to their intrusive energy, banking, pharmaceutical, food, finance and weapons lobbies, demonizing others and constantly pushing for war. At the epicenter of these nations is NATO, with the FUKUS Axis (France-UK-US) the spider at the center of the web and the bed-masters, ASS (Anglo-Saxon Syndicate, USA, UK and Australia) the web-spinners.