Nothing raises my ire more than the words 'Jimmy Carter: worst U.S. President ever'. It matters little whatever the MSM medium is: TV, radio, news rags, internet, etc. To my ears, those spewing such nonsense vitriol are in their entirety of the same ilk: reprehensible scoundrels; scallywags who know next to nothing about the former Navy sub commander and one time 'peanut farmer from Georgia. 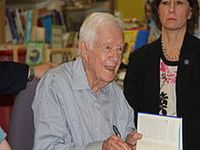 Other than the negative narrative that many political 'commentators' have been inculcated with during their own 'formative' years, today nary will any media have something to good to say about Jimmy Carter. This is identical same sick tack the MSM use with Russia's President, Vladimir Putin; this is true for both sides of the Atlantic. Nor do I care for and make exception as to source of the expositor. These days it seems almost anyone and everyone who wants to make a big media splash invokes the 'Carter comparison'; they usually do so when they have no real cogency to convey.

For many of the talking political hacks, Carter bashing comes in handy when they have nothing else to say. In media parlance, this void on the air waves is referred to as dead time. One could argue, and with merit, that any time the media is on the air is really brain dead, wasted space; that scenario is especially true if the 'viewer' even has a modicum of intelligence. Older generations should be well acquainted with the source of the 'failed Carter presidency' analogy.

Elected in 1976, Democrat Jimmy Carter was a 'one and done' U.S. President. In the ensuing 1980 election he was swept from office in a landslide victory. The Republicans' poster boy, Ronald Reagan, though already ensconced in his golden years, was hailed as America's savior. In the lead up to the election, the Iran hostage crisis proved pivotal in Carter's waning political hopes for a second term; the aborted and ill-fated Iran hostage rescue saw to that. In fact, it was the final nail; the lid was now slammed shut for not only Jimmy Carter, but for Democrats in Congress; at least for 12 more years. Add angst to my ire; I have since discovered that now even Christians have conjoined the ignorant anti-Carter pejorative.

A while back, Louisiana Gov. Bobby Jindal, a professed Christian, went public with the 'Carter' analogy in his off-handed and oblique attempt to criticize the current office holder, Barack Obama. In doing so, I believe Jindal impugned Jimmy Carter. Although that may not have been Jindal's intent (by the way may the rising star GOP candidate may seek the Presidency in 2016) the disparaging result cannot be refuted or excused. Moreover, Jindal who is a contributor to the popular Christian radio program, Focus on the Family, should know better. Christians should never attack their faithful brethren; even from afar (Jimmy Carter is a practicing Baptist). Jindal should recant those words. He should apologize.

In short order. What the ignorant MSM and general public alike don't know or refuse to acknowledge in their combined cognitive dissonance is, Jimmy Carter, since leaving the nation's highest political office has soared to career diplomatic heights that most savvy politician, aspiring renowned journalist and/or pundit cannot even dream of.

By any definition, Jimmy Carter is a citizen of the world; but he is humble in every aspect of his approach. From his tireless devotion and hands-on-work with his native Habitat for Humanity projects to as far away places as the remote and poorest corners of the globe, Jimmy Carter has championed all worthwhile causes; especially laudable are those endeavors where he advanced human dignity, promoted respect for disparate cultures and provided moral and financial support for sovereign nation development, free from outside influences. Palestine, North Korea, and the African continent just to name a few...

One would think that with all the trouble brewing around the globe, the Obama Administration would call on his diplomatic skills. If nothing else, he should be dispatched abroad; as a goodwill ambassador; on the double. Ukraine would be a good starting point. Lord knows; America and the entire world are better off if Carter was engaged. You know; people talking to each other in earnest discussions. Juxtapose Jimmy Carter's honest approach with the Kerry bunch over at the State Department.

So far, all that gang has accomplished is a constant cacophony of outright lies, innuendo, and boisterous bluster against Russia and their courageous President, Vladimir Putin. Instead of fostering a better understanding of the entire context, under Kerry's, NATO's and the EU's watch, Ukraine now is divided; Kiev's half is ready to implode, both economically and politically. By extension, the world may well follow in its wake; but at a previously unthinkable depth.

Today, all of humanity is closer to thermal nuclear war than ever before. What is the Obama Administration waiting for? Call Carter...