NATO's goal is to take Russia down 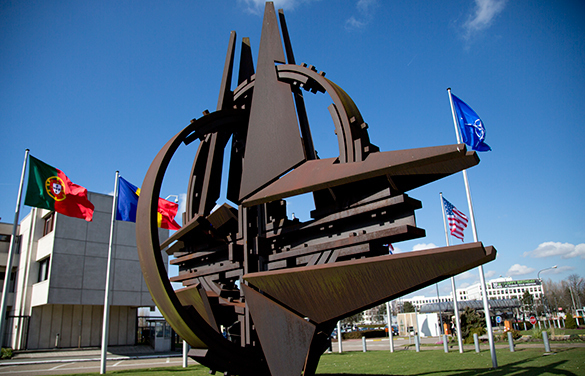 We stand here today at a crossroads of history.

If we take the better path today, future generations might look back in appreciation.

If we make the wrong choice, those youngsters might not have a future, because the great bi-partisan War Party of America is moving steadily down the path towards war.

That War Party includes most political leaders and most of the neo-liberal, neo-conservative and Straussian think-tanks, including but not limited to President Obama, Secretary Kerry, the Chicago Council on Global Affairs and the Brookings Institute. Cheering from the sidelines are the government of the UK and the Energizer® War Bunny in Canada, the would-be War President Harper. Looking down the trophic chain of respected opinion-makers, I don't see anyone taking a strong stand for the Peace side, so that job seems to fall down onto me, a sheep farmer in Canada.

The issue at hand is the creeping cloud of war being brought against Russia by the typical neo-liberal mechanism of incrementalization via the agency of NATO. In this latest quest for expansion into the Ukraine, NATO has shown its hand and its cards are now revealed. NATO's "wet dream" is and always has been to "finish" World War II, by taking down Russia. NATO was set up as both a vehicle for maintaining American hegemony in Europe and as a means of doing an end-run around the requirement of consensus in the UN Security Council, thereby defeating the purpose of the United Nations in eliminating wars of choice and aggression.

The stages of incremental aggression by NATO and its supporters against Russia via the territory of the Ukraine are well known to those who read outside the New York Times. The whole operation was set up under cover of the Russian 2014 Winter Olympics. The foreign ministers of Europe brokered a deal in February 2014 to keep Yanukovych in power until elections later in the year. The next day, the State Department-supported rebel mobs gained power, with Yanukovych fleeing to Russia, and a pro-NATO puppet installed in Kiev and immediately recognized as the legitimate government by the pro-NATO nations. Of course, this puppet regime claimed the territory of Eastern Ukraine so had to take military action against those residents, even though they rejected rule by Kiev. Since they had long-standing ties to Russia, and they reject the puppet government in Kiev, the worst label could now be applied to them - "pro-Russian separatists" which implicitly rejects both their humanity and right to self-determination.

All along, Russia is supposed to stand idle while NATO builds military encampments along its borders, and is expected to just "lie back and think of England" during all these territorial insults. When Russia doesn't lie back, they are faced with increasing embargoes and another bout of deliberately lowered oil prices, apparently designed to have the same effect as that measure did years ago resulting in the collapse of the USSR.

The incremental aggression continues with western proposals to supply the Kiev government with better military hardware and "advisors", along with the NATO puppet Poroshenko now finding a public voice, to legitimize his claim to power, by requesting military aid. One "leader" talking to the other western leaders, wink, wink. The short-term goal is to have a noxious net of NATO bases right up to the border of Russia, from Estonia through Eastern Ukraine, while NATO's end game is to take down Russia completely, taking out Russia's support of Syria and thereby Iran, and allowing Russia's entire vast territory to become a nearby "resource planet" to supply the needs of Consumerism for many more decades. The risk is nuclear war - imagine hundreds of Chernobyls.

The solution is fairly simple. NATO must be disbanded and its activities must cease and not be carried on through other channels. Encirclement of Russia must cease. It is hard to imagine any other nation enduring this kind of encirclement and insult for this long. American "exceptionalism" will cease, and the US, although having done nothing to earn this respect, will be accepted as an equal amongst the family of nations on this small planet. The US will stop trying to develop international policy and instigate wars by doing end-runs around the authority of the United Nations. All agencies of the US government involved with international affairs including but not limited to the State Department and the CIA, will remove the words "go in there and" from their vocabularies. All nations of the world will immediately begin measures to completely eliminate nuclear weapons from this planet, and that includes that other self-righteous pole of exceptionalism, Israel.

Then finally, with US Exceptionalism, NATO and nuclear arms out of the way, we can make progress towards world peace and begin working on the big issue - climate change.