Projects are under way in Germany and in Madrid, Spain, to set up psychological screening programs aiming to monitor development from childhood onwards, with a view to identifying risk factors and preventing them from becoming pathological, causing enormous social expense downstream. 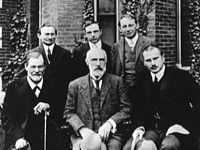 Anthony X. kicked his great-aunt to death when he was eighteen years old, because she had just received her monthly pension and refused to give him the 300 dollars he needed to pay off his debts to his crack cocaine dealer and buy his next fix. When he was fifteen, he assaulted an old lady as she was paying for her groceries, stole her purse and was arrested. Three years earlier, he had been arrested for stealing the funds from his school charity box. At age eleven, he had kicked a neighbor's cat to death, at seven he had roasted his sister's hamster in the microwave. At age 4 he was drawing pictures of women colored red and orange with huge staring eyes. At age two he was witnessing his drug-using and alcoholic father abusing his mother sexually and physically.

When he was eighteen he was called a monster, a son of a bitch and a waste of time and space. His name is Anthony X.

Nobody can call the four-year-old that draws pictures of women colored red and orange with wide, staring eyes, a monster. Ten years later, he has already murdered a cat and a hamster, probably has also gone to school with his pockets full of spiders, has stuffed a snake down the back of a three-year-old girl causing her psychological damage which she has to live with for the rest of her days.

Ivan K. has to get up at three thirty every morning so as to arrive in his bank at 8.00 in central Moscow. The journey takes him 45 minutes by Metro. So why does he need four and a half hours? Because he has to wash his hands 127 times, has to wash his feet in hot and cold water 46 times before breakfast, has to say a growing series of prayers every time he steps over a threshold in his home, and has to touch and lick the windows in every room of his house seventeen times, before going out and closing the door, then locking it and unlocking it numerous times, with his eyes closed, until he sees a cross.

Nobody at work knows this happens, although his attention starts to decrease in mid-afternoon and Ivan starts to get agitated as he starts to feel he has to blink twenty-three times before he gets up from his chair.

Usually for every case of obsessive and compulsive behavior there is a motor which is anxiety.

And this motor has tentacles in drug use, in alcohol abuse, in sociopathic and psychopathic behavior. Those girls who travelled to Syria to be the wives of a Jihadi, those boys who joined Islamic State because they wanted to get back at the non-believers who had made them fail... that young man who kicks an old lady to death, that teenager who rapes a pensioner, that thirty-year-old father of five who downloads images of children being sexually abused, that forty-year-old who travels to northern (wherever) to receive a five-year-old girl in his hotel room to abuse, rented out by her own parents, that fifty-year-old who abuses schoolboys in public toilets...

Trace back along the tail to the head, and see where the story started. Identify the starting point, and start therapy before the tendency or threat becomes a pathological behavior.

Psycho-hygiene. Can we start the debate?