Libya's former colonial power and one of the NATO criminals during the 2011 war smells blood - literally. And that isn't the only thing Italy smells. The steeling of Libya's oil and deposits in the imperialists banks turned out to be insufficient to boost the economy of the largely bankrupt European countries, of which Italy is one of the worst - actually worse than Greece. Time for someone, in this case Italy's defense (war) minister, to decide that drastic problems need drastic solutions. 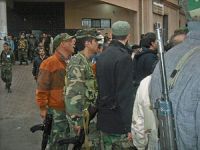 In an attempt to avoid the impression of an obvious causal link, it was the day before the release of Italy's economic statistics, that the so-called Islamic State (IS/ISIS) on February 12 published photos of 21 Egyptian Coptic Christian fishermen they allegedly had kidnapped in the Libyan city of Sirte, and whom they threatened to kill. On February 13 it became known that Italy's economy has only grown 4% since the euro was created sixteen years ago, that its economy is among the EU's worst in the fourth quarter of 2014 and that its debts are too big to be ignored. A Washington Post report calls Italy "Europe's ticking time bomb", stating the country is "crucified on a cross of euros".

Only two days later, a video of the kidnapped Coptic Christians being marched along what is believed to be a Libyan beach before being beheaded by members of IS, went viral. As the world watched in disgust at the Mediterranean waves dyed red from the blood of the murdered men, Italian defense minister Roberta Pinotti called on for urgent international action "to halt Libya's slide into chaos", saying Italy is "ready to lead a multilateral effort to tackle the growing threat from jihadists in Libya and prevent 'a caliphate' forming across the sea from Europe's shores".

That same week the sudden hysteria over the effects of the Libyan crisis knocking on Europe's back door reached unprecedented heights, when one of the front-runners in anti-Jamahiriya propaganda, the British outlet Daily Mail, published an article headlined "ISIS threatens to send 500,000 migrants to Europe as a 'psychological weapon' in chilling echo of Gaddafi's prophecy that the Mediterranean 'will become a sea of chaos'."

As much as the mainstream admission that Gaddafi was right all along deserves a small celebration, the proclaimed awareness of the direct threat to European security of a terrorist haven on the shores of the Mediterranean, just a few hundred kilometers away from Italy, will not come to the rescue of the ordinary Libyan people who continue to suffer terribly as a result of the NATO overthrow of the Jamahiriya, as Libya was personally handed over to the so-called rebels, currently known as IS terrorists, by the NATO countries, not in the last place by Italy itself. Gaddafi again has proven to be right when he said that "It's Al Qaeda. It's not my people."

The black flag was already flying over Libya during the NATO aggression in 2011. IS did not recently come to Libya. It did not come to Libya at all; it sprouted from terrorist groups such as the Libyan Islamic Fighting Group and Al-Qaeda in the Islamic Maghreb that have been present in Libya since the 80s. It was NATO's war on Libya that finally gave them free rein, and Italy is well aware of this. The only problem for Italy is that they grew a bit too big for comfort, and came a bit too close for comfort as well.

But it isn't all doom and gloom for the warmongering country. The presence of IS at the gates of Europe does not only reboot the War on Terror, it will also boost the economies of the countries that decide to wage war against the terrorist group. Economists stated last week that the Italian economy needs to start growing more than 0.25% a year - a lot more. Now the most lucrative thing that can happen to the economy of a Capitalist country is war, for it forces the country to borrow even more money from the bank, at interest.

Will Europe's ticking time bomb bomb Libya again, like it did in both 1911 and 2011? One thing is for sure: the NATO countries continue to take the "quod me nutrit me destruit" to a whole new level, as they keep nourishing the destructors of their own creation for the sake of nourishing their economies - through destruction and war. And of course, like always, under the guise of protecting civilians.