Why does Britain have a problem with Russia?

In recent days, the hyperbole has risen to hysteria level with senior members of the British government outdoing each other to make the most infantile, irresponsible, insolent and insulting remarks against Russia and its President, Vladimir Putin. What is Britain's problem with Russia, the country that shed rivers of blood to free Europe from Fascism? 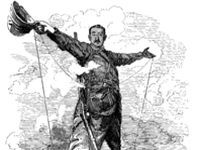 Only last week, Britain's Foreign Secretary Philip Hammond was insinuating that Britain might get involved in Ukraine because he would not allow Ukraine's military forces to collapse, while his boss, Prime Minister Cameron, rudely referred to Russia's President as "Putin". Today, we have the Defense Secretary Michael Fallon warning that Russia might use military force against its neighbors, while the British Bullshit Corporation and Lies on Sky ratchet up the anti-Russia hype calling its President a despot, calling Russia's government "desperate" and insinuating that Moscow might suddenly send the tanks rolling across the frontiers.

Two questions: Is the British public really so gullible that it will swallow that nonsense, or are the purveyors of lies as truth yet again a decade or so behind the times? The answer to the first question is no and the answer to the second is yes.

Everybody knows that Russia and Britain (and France and the USA, among others, including Serbia) stood together just over half a century ago to defeat the worst scourge Europe has seen since the days of Genghis Khan - Adolf Hitler's Nazi Third Reich. It was a war in which Russia, as part of the Union of Soviet Socialist Republics, lost over 26 million souls freeing Europe from tyranny, racism, homophobia, intolerance and Fascism. Around ninety per cent of  the Wehrmacht losses were incurred on the Eastern Front.

Serbia soon found out that its loyalty and courage meant nothing to the West once it had started meddling in the Balkans to take public attention away from President Clinton's midriff and to intrude once again in the internal affairs of sovereign states, as the West has been doing for centuries.

Everybody knows by now that Afghanistan was about energy, not 9/11; everybody knows that the Kosovo affair was about supporting Albanian terrorists who had been murdering Serbian police and civilians to create a micro-State in the heart of ex-Yugoslavia, pandering to the whims of the Albanian Lobby which had gained a foothold on Capitol Hill; everybody knows that the invasion of Iraq was a total and unequivocal disaster, constituting a breach of international law and numerous war crimes. Britain's leaders at the time would have been in a war crimes tribunal in any civilized part of the world. In the event they were covered by their bedmaster, the ex-colony across the Pond, the USA.

Everybody knows that the Georgia conflict was started to provoke Russia and to test its reactions after Georgian forces attacked and murdered Russians in South Ossetia and Abkhazia. The British media never informed its readers and viewers that the terms of the Soviet Constitution had very clear rules about any eventual Dissolution of the Union and among these were the obligation to hold referendums in areas where the composition of regions and territories held enclaves of citizens of differing nationalities. Georgia never held these referendums.

Everybody knows that the attack against Libya yet again breached international law, as the terms of UNSC Resolutions 1970 and 1973 (2011) were broken, as civilians were murdered and as Britain involved itself once more in one of NATO's wars to perpetuate its own existence as a club whose members collectively spend one point two trillion USD per year, each and every year, on their military budgets.

Libya, a country living in peace within its own borders, the country with the highest Human Development Index in Africa, was dismantled and today has descended into total chaos, each region with its own government, crawling with terrorists and today also with a growing area controlled by Islamic State. Under international law, this is a crime (*)

Everybody knows that the West yet again got it wrong in Syria, where President Assad was fighting against Islamic State and other terrorist groups funded and equipped by the West against him - and now that the West has finally woken up, does it apologize and state that it was supporting the wrong side? No, it continues to give covert assistance to terrorist groups while complaining at the same time about Islamic State. Only today Lies on Sky showed footage of "rebels" attacking Syrian Arab Army servicepeople, calling them "regime soldiers" and claiming the "rebels" won a victory outside Aleppo.

And today everybody knows perfectly well what is happening in Ukraine, where the democratically elected President, Viktor Yanukovich, was ousted in an uprising in which the demonstrators themselves were firing at the police to cause a reaction and also at their own members to incriminate the President (the old 100-souls-sold-for-the-good-of-a-cause ploy), everybody knows that the new Ukrainian Putsch regime started the problems with their anti-Russian rhetoric, threats, aggression and massacres in Odessa, Mariupol, Slaviansk and Donetsk.

Everybody knows that Russia has followed international law, while Britain and its bedmaster have not, everybody knows that NATO has committed numerous war crimes in recent years while Russia has not. NATO stands for intrusion and belligerence, Russia stands for measured and balanced approaches to crisis management using the proper forum of discussion, the UN Security Council, an organism which Britain and its bedmaster have derided and insulted in the recent past.

Isn't it time for a responsible foreign policy by a British Government which looks to a future based upon common interests, rather than following orders from across the seas and feathering the nests of the lobbies which control its members?

This is Britain's problem with Russia. Ladies and Gentlemen, Britain does not have its own foreign policy. It has been assimilated and the Governments of the last few decades have worked hard towards this goal. I have two words for this: High Treason.