Libya Lies - Rape as a Weapon of War - Made in the USA?

"It's really 19th century behavior in the 21st century, you just don't invade another country on phony pretexts in order to assert your interests." (Secretary of State, John Kerry, "Meet the Press", 2nd March 2014.) 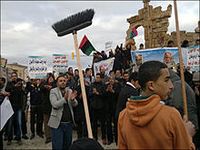 Various professional psychology sites  state succinctly: "Projection is a defense mechanism which involves taking our own unacceptable qualities or feelings and ascribing them to other people."

Further: "Projection tends to come to the fore in normal people at times of crisis, personal or political, but is more commonly found in the neurotic or psychotic - in personalities functioning at a primitive level as in narcissistic personality disorder or borderline personality disorder", opines Wiki.

With that in mind it is worth returning to the assault on Libya and the allegation by Susan Rice, then US Ambassador to the UN, in April 2011, that the Libyan government was issuing Viagra to its troops, instructing them to use rape as a weapon of terror.

However, reported Antiwar.com (1) MSNBC was told: "by US military and intelligence officials that there is no basis for Rice's claims. While rape has been reported as a 'weapon' in many conflicts, the US officials (said) they've seen no such reports out of Libya."

Several diplomats also questioned Rice's lack of evidence suspecting she was attempting:  "to persuade doubters the conflict in Libya was not just a standard civil war but a much nastier fight in which Gadhafi is not afraid to order his troops to commit heinous acts."

The story was reminiscent of the pack of lies which arguably sealed the 1991 US led Iraq onslaught - of Iraqi troops leaving premature babies to die after stealing their incubators. The story of course, was dreamt up by global public relations company, Hill and Knowlton Strategies, Inc., then described as the word's largest PR company which had been retained by the Kuwait government.

A tearful hospital "volunteer", Nayirah gave "testimony" which reverberated around an appalled world. It transpired she was the daughter of the Kuwaiti Ambassador to Washington and was neither a "volunteer", "witness", nor in Kuwait. Amnesty International obligingly backed up the fictional nonsense suffering lasting credibility damage.  However, as Libya two decades later, Iraq's fate was sealed.

The US Ambassador the UN, Susan Rice and Foreign Affairs advisor, Samantha Power are credited with helping persuade President Obama to intervene in Libya. By the end of April 2011, Rice was also pushing for intervention in Syria, claiming that President Assad was: "seeking Iranian assistance in repressing Syria's citizens ..." In the light of all, she vowed: "The United States will continue to stand up for democracy and respect for human rights, the universal rights that all human beings deserve in Syria and around the world." (Guardian, 29th April 2011.)

Looking across the world at the apocalyptic ruins of lives and nations resultant from America's continuance in uninvited "standing up" for "democracy", "human rights" and "universal rights" there are surely few who could not only silently weep.

Amnesty, perhaps "once bitten" not only questioned the Libya Viagra nonsense but denied it in categorical terms. According to Donatella Rovera, their Senior Crisis Response Advisor, who spent three months in Libya from the start of the crisis: "We have not found any evidence or a single victim of rape or a doctor who knew about somebody being raped."(2)

Liesel Gerntholtz, heading Womens Rights at Human Rights Watch which also investigated the mass rape allegations stated: "We have not been able to find evidence."

The then Secretary of State, Hillary "We came, we saw, he died" Clinton, was "deeply concerned" stating that: "Rape, physical intimidation, sexual harassment and even so-called 'virginity tests' " were taking place not only in Libya, but "throughout the region." Presumably leaving the way open for further plundering throughout Africa in the guise of bestowing "democracy", "human rights" etc.

Luis Moreno-Ocampo, Prosecutor of the International Criminal Court obediently weighed in telling a Press Conference of:  " ... information that there was a policy to rape in Libya those that were against the government. Apparently (Colonel Gaddafi) used it to punish people." A bit of a blow for the impartiality and meticulous evidence of the ICC it might be thought.

A week after the bombing of Libya started in March 2011, Eman al-Obeidy burst in to a Tripoli hotel telling the international journalists there she had been raped. She was removed by Libyan security. Government spokespeople claimed she had mental health problems, was drunk, a thief a prostitute and would be charged with slander. The world sneered.

By June 2011 Ms al-Obeidy had ended up in Boulder, Colorado, US, granted asylum with remarkable speed, with the help of Hillary Clinton, according to US news outlets.

In November 2014 al-Obeidy, now known as Eman Ali, was arrested  "violating conditions of her bail bond and probation." It was her third arrest. Prosecutors allege that she tested positive for opiates and alcohol. The probation and bail bond relate to an alleged assault case in a Boulder bar with Ms al-Obeidy-Ali accused of pouring drink over a customer and then lobbing a glass at her. (3,4) The trial is scheduled for 17th February with the possibility of her asylum status being rescinded.

However, back to projection. It transpires that the Pentagon has been supplying Viagra to US troops since 1998. That year it spent $50 million, to keep troops, well, stiffened up: "The cost, roughly, of two Marine Corps Harrier jets or forty five Tomahawk cruise missiles ..."(5)

By 2014 the cost of extra-curricular military forces frolics had risen to an astonishing $504,816 of taxpayers moneys. An additional $17,000-plus was spent on two further erectile enhancing magic potions.

The Washington Free Beacon helpfully estimated: "that the amount of Viagra bought by the Pentagon last year could have supplied 80,770 hours, 33 minutes, and 36 seconds of sexual enhancement, assuming that erections don't last longer than the 4 hour maximum advised by doctors."(6)

Surely coincidentally, on 14th February, St Valentine's Day, Joachim Hagopian released an article: "Sexual Assault in the US Military - More Rapists Attend the Air Force Academy Than Any Other College in America." (7)

In a survey taken in 2012 "an unprecedented number" of over "26,000 incidents of unwanted sexual contact was reported by service men and women." Further, weekly: "another high profile officer often in charge of reducing assaults was being investigated and charged himself."

The US Air Force at Colorado Springs, writes Hagopian: "has more rapists on Campus than any other college in the country."

But then the US military planners would seem to be sex and bodily function obsessed. In 1994 they contemplated releasing pheromones (a hormonal stimulus) against enemy troops: "to turn enemy soldiers into flaming love puppets whose objects of affection would be each other." (8)

"While enemy troops were preoccupied with making love instead of war ..." America's finest could blow them to bits. This bit of military dementia was dubbed the "gay bomb."

Also dreamed up have been halitosis, flatulence and vomit inducing chemicals to unleash on foes. Body function obsession clearly rules in  the armed forces, officially and unofficially.

Projection: " ... is more commonly found ... in personalities functioning at a primitive level." Indeed. And to think both Saddam Hussein and Colonel Gaddafi were labeled mad by such as these.