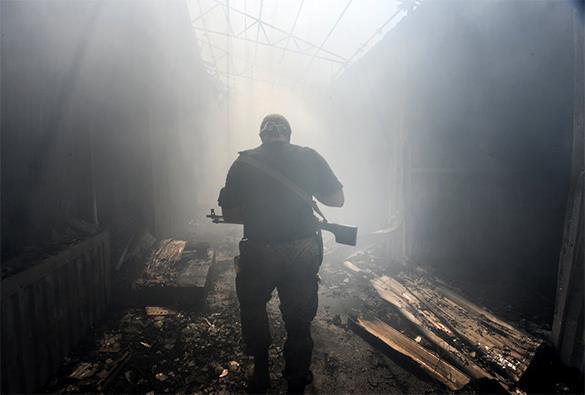 The recent Minsk ceasefire agreement that was agreed to by both sides of the Ukrainian civil war lasted about an hour. It comes as no surprise as the first one was broken as well. The puppet president who was placed there by Obama never had any intention for peace. Genocide is their goal and the people of SE Ukraine in Donbass know it. When the devil tells you he wants peace you better prepare for war.

I have no idea why they even try to bargain with this monster Poroshenko. He is backed by another monster, Obama from the US who is a puppet himself doing the bidding of Soros, Rothschild, Rockefeller and other elites in the West. America is where paleface speaks with fork tongue. How many treaties did the US break with the natives? The most advanced native civilization at the time was the Cherokee nation. They were driven out of their homeland in a death march called the "trail of tears" and were relocated. The brother of the Shawnee Chief Tecumseh, Tenskwatawa, even cursed America in his Curse of Tippecanoe.  Today in Ukraine, Poroshenko is cursed by the civilians he bombs.

Two women from Uglregorsk, near the Debaltsevo Cauldron, are in the video and one cursed Poroshenko. "Poroshenko and clique, may they be cursed! May they be cursed! Yes, to the seventh generation. For the killed children, for the wrecked houses, for everything - may he be cursed! I have been starving since July, I do not have bread to eat. We do not have money. I have a handicapped son... We have nothing. May he be cursed, together with Yastenyuk! Poroshenko, may he be cursed! And may he be cursed again! I have a handicapped son, and for many months I cannot receive any money. What is going on? We are cold, we are starving! And that one who was shelling our residents from the mine, he got captured. He deserves to be cut into belts!"

The Indian Removal Act of 1830 was politically motivated. Gold in the state of Georgia was one reason. In the Ukraine its oil and gas as the "Smiling Jackass", Vice President Joe Biden, has his son appointed to Ukraine's Largest Gas Co. Last April, Hunter Biden was placed on the board of directors at Burisma Holdings. Victoria Nuland defends Chevron's interests. For Europe, Oil and Gas is cheaper from Russia than from the US. "Do you not realize that much of Europe is dependent upon Russian gas for winter warmth? And that most of the constituents I represent are already struggling to pay their energy bills each month." Mike Hookem slaps the EU with facts in this video.

The US and its elite don't want Russia to expand economically. So the US starts a war for the resources in SE Ukraine. Propose to overthrow the government of Russia in bill S-2277. They beef up NATO and establish a US base near Kiev and Obama sends more billions to NATO countries.  First they called the Russian speaking residents of SE Ukraine "terrorists. This made it easier for the Ukrainian army to bomb them. After CIA director Brennan came to Kiev, the Ukrainian army only focused on civilians to bomb.  They needed more money. Obama and his propaganda machine lied to the American people that Putin invaded Ukraine. A bill was signed last December by Obama to send military aid to Kiev. One Republican spoke out against it but no one in the west cared.

There is true evil on the Kiev side. The woman who once sided with Putin and made gas deals with Russia was recorded as saying she wants to exterminate 8 million Russians in Ukraine on this video. As an American puppet, Yulia Tymoshenko came to power as prime minister after the US backed the Orange Revolution in 2004. In 2012, during President Viktor Yanukovich term, she was jailed for fraud. Yulia was released from jail after the overthrow of Yanukovich which was also funded by the US. The Ukraine army are no angels either. They say Lucifer protects them. They wear yellow and blue arm bands indicating they are Poroshenko's army from Kiev. Notice they are well aware they are bombing civilians in the video.

Have you not heard what Poroshenko has said? See the video. "The way we use the time of the ceasefire? The combat capability of the units and sub-units has been completely restored during the time of pause in active hostilities. The effectiveness of the actions of the Ukrainian army is way higher now. That's how we use this so-called ceasefire". The people of SE Ukraine never believed in the ceasefire anyway. "Poroshenko is not to be trusted" The victims of Obama and Poroshenko ask for help from Russia in the video not America. In this video they ask for Putin's help.

I wish he would help these people. These Ukrainians speak Russian and are members of the Russian Orthodox Church. If President Putin did give military aid Kiev would be overrun in 48 hrs. However, it would give NATO a reason to start WW3. America behind its iron curtain is already convinced that Putin has invaded Ukraine. Obama declared Russia a threat here. "I took a decision only when I saw that Russia had reached the hour to advance against us", said Hitler.

If Putin invades Kiev, America would pull the trigger without hesitation. Russia would still win because NATO and the US are no match as demonstrated here. What price victory? We know too well the effects of war. Ukraine and possibly Europe would become a Hell hole. Fortunately, President Putin's strategy is working. Eventually Poroshenko will be overthrown by his people. President Putin also believes that the truth will come out and eventually Europeans and Americans will wise up.