One day after the Minsk agreement, the Ukrainian Armed Forces (UAF) loyal to president Poroshenko continue to shell civilians all across the front with massive artillery bombardments. Three children have been murdered. 80 children and 3 disabled people have been left homeless. Facilities have been mined as the UAF plan to withdraw while destroying as much as they can in the process. 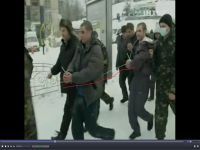 As the Russian Federation sends the fourteenth humanitarian aid convoy to aid the civilians of south-eastern Ukraine, the forces loyal to president Poroshenko, who is supported by the west, have continued their shelling of civilian areas, while the western media blames this on "Russian-backed rebels". Translation: Russian-speaking Ukrainians who were forced to take up arms to protect themselves after Kiev launched a series of Fascist massacres in Odessa, Donetsk, Mariupol and Slaviansk.

In this column I am collecting credible eye-witness accounts from sources across the front in Ukraine and as usual, I refuse to write one single word until I am convinced that I am telling the truth. Let us begin by reminding ourselves that when the previous ceasefire was proposed by the Novorossiya Armed Forces (NAF) (Russian-speaking Ukrainians defending themselves after Fascist massacres were launched by Kiev and forces supporting the new Junta which came to power in an illegal Putsch last February) the Kiev Junta refused to accept because it understood it was in a position of strength.

Let us see how the UAF are behaving after their president, Poroshenko (not his father's family name, which is Valtsman) signed the Minsk Agreement on Thursday February 12.

Chernukhino: The Emergency Situations Ministry of the Lugansk People's Republic had to evacuate dozens of civilians after the UAF started to indiscriminately shell civilian areas. The homes of many elderly people were targeted by the forces controlled by Poroshenko, who is supposed to be the president of all Ukraine, as he claims. If being a president is shelling people's homes...

The murderous actions of the UAF have caused in just a few days 337 refugees in the area, including 80 children and three disabled people. The western media continues to say that the shelling comes from "Russian forces" or "pro-Russian rebels". It is difficult to imagine why they lie day after day and pay a huge disrespect to the victims being murdered by the "side" they support. Why not tell the truth?

The UAF has been shelling some civilian villages ceaselessly since before the ceasefire was signed by Poroshenko and they have not stopped today.

Khryaschevatoye. In a few days of occupation by the UAF, 28 villagers were murdered.