There is hope on the horizon for the Libyan town of Tawergha that has been totally ethnically cleansed by the pro-NATO forces and NATO itself during the 2011 aggression - at least if we believe the United Nations Support Mission in Libya (UNSMIL). Calling it a breakthrough reached at the Geneva dialogue talks earlier this week, the UNSMIL stated: 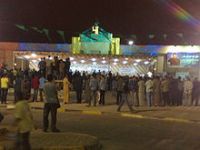 In line with the positive environment that prevailed at the meeting, the UN facilitated an agreement between the municipalities of Misrata and Tawergha on the following points:

1) Establishment of a committee from the local council of Tawergha and whoever they call upon to help in visiting the prisons in the city of Misrata and to receive assurances about their conditions, and to review with the responsible authorities the charges against them and their legal status.

2) The right of the people of Tawergha to return to their land through the establishment of a committee to discuss the mechanism to achieve that on the ground and to remove all obstacles and prepare all the appropriate conditions.

There was agreement that UNSMIL will follow up this process in cooperation with the two sides.

However, even mainstream sources that covered up for the outrageous racist crimes of the pro-NATO rebels against the Tawerghans, were quick to express their concerns about the UNSMIL statement. "There are fears that the continuing antagonism towards Tawergha in Misrata is such that this move to resolve the differences between the two could undermine support for those in the city who want to build bridges with the rest of the country and end the current political crisis", Libya Herald wrote on Thursday.

Speaking about bridges, the road from Misrata to Tawergha most certainly is everything but a bridge towards brighter future. Along the route, the Misrata Brigade has painted a slogan in which they call themselves "The Brigade for purging slaves and black skin." The Misrata rebels perfectly lived up to their slogan during the aftermath of the so-called fall of Tripoli, when they locked Tawerghans in zoo-like cages with their hands bound and forced them to eat the Green Flag of the Jamahiriya, which once again indicates that racism lies at the heart of many of the NATO campaigns.

Following a two month siege, Tawergha, a once vibrant town of over 31,000 people, the vast majority of them darker skinned than most Libyans, has been emptied of its entire population in late 2011. In the Amazigh language, Tawergha means "green island", and it indeed was a strong resistance of Green Libyans against NATO, from where the forces of the Jamahiriya led the assault against the Misrata terrorists. Today, Tawergha is a ghost town in the middle of the desert. The town lies about 35 miles south of Misrata, and it was there where NATO puppet Mahmud Jabril himself approved the wiping of the town off the map when he said that Misrata has the right to interfere in the "issue of Tawergha", meaning its loyalty to the Jamahiriya.

Since then, pro-NATO forces have been ransacking and torching homes in the town. Tens of thousands of Tawerghans are now living in refugee camps or, like over two million other Libyans, under dire conditions in countries abroad. Credible reports mention Tawerghans being raped, disappearing and being killed.

So who benefits from the "agreement between the municipalities of Misrata and Tawergha" reached at the Geneva talks, if not the people of Tawergha?

The UNSMIL statement on Tawergha is a perfect tool to be used by European courts and immigration agencies who are eager to get rid of the many Libyan refugees. The NATO governments very much wanted this beautiful clean war, which unlike the war on Afghanistan and Iraq met almost no opposition as We the People were led to believe that the end justifies all means when it came to eliminating the "cruel bloodthirsty dictator", but they do not want the uncomfortable results of their aggression, including the hundreds of thousands of Libyan refugees that have flooded into Europe. Fortunately the UN came to the NATO governments' rescue, and now the European authorities have an official document to wave and an official statement proving that they can wash their hands clean of this well-hidden dirty racist secret.

Welcome home, Tawerghans! Welcome back to your vandalized and looted houses. Welcome back to the ashes of your beloved places that were set on fire to prevent anyone from ever living there again, as the pro-NATO rebels shamelessly declared in 2011. We wish you all the best!