Pilot Savchenko admits to having taken part in ATO as a volunteer of Aidar battalion, while still remaining officer of the Armed Forces of Ukraine. Amnesty International: "Members of Aidar territorial defence battalion, operating in the north Luhansk region, have been involved in widespread abuses, including abductions, unlawful detention... 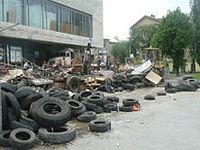 It is with sheer astonishment that I got to know of your decision to grant international immunity to a Ukrainian pilot N. Savchenko held in pre-trial detention and charged with crimes against humanity or war crimes (if you concur with HRW and Red Cross based in the fields in Ukraine terming the situation there as civil war).

How can a reputable organisation like yours grant international immunity to someone allegedly responsible for indiscriminate bombing of towns (civilians) by military jet fighters (as we know, she took part in ATO and was trained to operate SU-24 bomber and helicopter MI-24)? Moreover, I would like to ask whether it was ascertained if, while/if on a mission, she deployed non-conventional weaponry - white phosphorus, cassette bombs (which Ukrainian Air Force is internationally acknowledged to have indiscriminately used against civilians)?

She admits to having taken part in ATO as a volunteer of Aidar battalion, while still remaining officer of the Armed Forces of Ukraine (on vacation). Amnesty International: "Members of Aidar territorial defence battalion, operating in the north Luhansk region, have been involved in widespread abuses, including abductions, unlawful detention, ill-treatment, theft, extortion, and possible executions."

She claims she was only taking the wounded out of the battlefield. However, her reports, when captured by Lugansk militia, said that she was unit commander and her nom de guerre was Bullet (according to some sources, she was a sniper, to others, a gunner). During the recorded interrogation she admitted to killing people.

According to Alexander Drymanow, Head of the RF Investigative Committee Department for Investigation of Crimes Involving the Use of Prohibited Means and Methods of Warfare, Savchenko brought fire of Aidar battalion mortars on Russian reporters, Igor Kornelyuk, Anton Voloshin and several refugees by the phone. Her guilt was confirmed by billing details of calls made from her cell phone, which was withdrawn from her by investigators during her detention in Russia. In addition, Savchenko had about her a map of the area, broken into squares, the one usually used for mapping coordinates of objects to be subjected to artillery and mortar firing. Savchenko is hence charged with infringement of five paragraphs of Article 105, Part II (a, b, e, zh, l ) and Art. 33, Part V of the Criminal Code, namely - "aiding and abetting in the murder of two or more persons in connection with the execution of service activities, in an indiscriminate way, for political motives of hatred committed by a group of persons".

This seems to be beyond the scope of investigation, but Ms. Savchenko also excelled in atrocious tormenting prisoners of war, i.e., Archpriest Vladimir Moretsky, Prior of the Holy Trinity Сhurch, who witnesses: "saying that we were sadistically beaten is saying nothing, we were murdered, tortured, shot at. Our bones were broken with rifle butts, legs, anything on hand. She partook in all of the above most actively, suggesting ways of beating that would be most crippling. It was her personally who suggested that all of our group be sold to black transplantologists for handsome money. When the other punishers refused, she personally suggested that we be shot (extrajudicial killing), not to bother with our transportation to Security Service of Ukraine." Archpriest Moretsky suffered a traumatic brain injury (among other incapacitating injuries) but was denied medical assistance.

Knowing who came to power in Ukraine I take it for granted that she was included onto Julia Timoshenko's bloc in Verkhovnaya Rada. The matter is that Mrs. Timoshenko herself was involved in two black transplantology scandals, one directly, when she rescued an Israeli transplantologist  surgeon Michael Zis detained in Donetsk and charged with illegal transplantology of human organs and human trafficking, the other indirectly, through her personal lawyer, last spring.  This information is widely circulating and, since it was not refuted, I believe it a sufficient sign of being true. http://nvdaily.ru/info/25138.html

Even though N. Savchenko's resourceful lawyers seem to have found a way to clear her of the charges of gunning using same billing details, on which public prosecution built the case (?!!)  and further plan to obtain a status of prisoner of war for her (what war are they talking about? Ukraine fights its civil war without declaring it, with 'aggressor' taking in hundreds of thousands of refugees, feeding Donbass people whom Ukrainian government left without means of subsistence by closing banks, not paying pensions, even accepting, treating, feeding, etc. military when they escape the war zone on the territory of the 'invader' - sounds logical, doesn't it ?) to exchange her for some rebel fighter, - the other charges remain (even if officially not put forward, the moral side does matter in your coming to her rescue).

How come is that these facts, widely circulating on the Internet, with live witnesses testifying against her, did not grab your attention? How technically do you decide whom PACE can support and whom it can't, for the sake of own renomè? Moreover, how can you demand that someone held liable for such grave crimes be released, thus tampering with the legal procedure? I leave your trade in of lift of sanctions at PACE for freeing Savchenko without comments. The way I see it, it's a scandal.

Why would it happen at all? Obviously, through utter lack of reliable information.

I would imagine that some info "from the fields" that you can derive from below videos in the comfort of your office, is just the right thing.

The first one is an amateur film on terrorism in Ukraine, or a compilation of videos rather, I would say, a must-see, for it helps fully understand the nature of Ukrainian war (that of ideologically driven genocide). Warning: some graphic content and some language that would benefit from euphemisms. But definitely worth watching.

Same as the documentary about Odessa massacre of May 2 (part 2 available on the net).

Proverbial truth has it that a man is known by the company he keeps. Same is true of companies, organisations, countries, you name it.

Please give another thought to your decision prior to making an irreversible step.