Greece: Syriza! The Left is back! A beacon of hope for Europe!

Predictably, Syriza has won the Greek parliamentary election in January 2015 with 36.39 percent of the vote and so far 149 seats in Parliament. Predictably, the people of Greece have taken a courageous step towards the Left looking for an answer to deep social problems caused by Rightist policies - austerity, cuts in public spending and social terrorism. 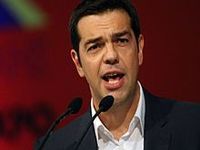 Syriza has won the Greek legislative election with 36.5 per cent of the vote and so far 149-150 seats in Parliament. Is this enough? With 151 seats needed for an outright and absolute majority, the result, is confirmed when all votes have been counted, means that Syriza will have to form a coalition to govern Greece.

Syriza's popularity can be explained by the dire situation many Greeks find themselves in after policies of social terrorism practiced by the political Right, implementing austerity measures which have cut social services, slashed jobs and rendered thousands of people homeless, hungry, hopeless and heartbroken, their country ransacked by banking institutions saddling Greece with a massive debt. Graduates cannot find work, and if it were not for the tremendous solidarity in the streets, with soup kitchens serving free hot meals on street corners, how many Greeks would die of starvation, inside the wonderful European Union? Government debt stands at 164% of Gross Domestic Product, unemployment at a staggering 27.5 per cent of the labor force, 33.1 per cent of youth are not in education or employment, and over 60% are unemployed. The fact that the VAT rate at 23% is higher than the average in the EU and that VAT Revenue Ratio (VRR) is well below average, is yet another indication that right-wing austerity measures have stifled, instead of stimulating the economy. Households are heavily indebted, small businesses are closing by the day.

Sinaspismós Rizospastikís Aristerás (Coalition of the Radical Left), or Sýriza, stands against austerity, stands for a renegotiation of Greece's massive debt to foreign financial institutions which took advantage of the country's plight, stands for employment. In short, Syriza is a beacon showing the way forward for other EU countries for whom membership of the European Union has been translated into poverty and hopelessness, while various echelons of Euro-Institutions creating thousands of jobs for the new political elite, their sons, daughters, cousins and cronies.

Beginning in 2001 as a movement (Space for Dialogue for the Unity and Common Action of the Left), in 2004, Syriza appeared formally as a coalition party of leftist parties and independent politicians, grouping together Democratic Socialists, Trotskyists, Left Greens, Maoists and Eurocommunists, developing into a unitary party in 2013 after becoming the second largest formation in Parliament a year earlier (27 per cent of the vote and 71 MPs) and becoming the most voted party in the 2014 European Parliament elections.

This, despite a fear-mongering campaign by those in the Greek establishment and the Eurocrats, who have done their utmost to stop Syriza becoming the first elected Leftist government in Greece.

On January 25, despite all these efforts, Syriza won the election. Syriza promises to renegotiate the loan deals signed with the Troika (EU, European Central Bank and IMF) and to abolish the memoranda signed with those who have caused Greece's problems with policies of social terrorism. Syriza states it will foster "a program of social and economic reconstruction, aiming at development that promotes human needs and well-being and respects nature".

Abroad, Syriza stands for a "multidimensional, pro-peace foreign policy" without involvement in wars.

The President of Syriza is 40-year-old Alexis Tsipras, born in 1974 in Athens. A civil engineer, he holds a post-graduation degree in Urban and Regional Planning. He was appointed Secretary of the Youth of Sinaspismos in 1999 and in 2004, he was elected member of the Central Political Committee and the Political Secretariat of the Party, responsible for education and youth policies. In 2006, he was elected councilor of the Municipality of Athens, head of the municipal movement "Open City" and in February 2008 he was elected President of the Party.

He entered the Greek Parliament after the national elections in 2009 and in 2010 was elected Vice President of the European Left Party. Re-elected as Member of Parliament in the election of 2012, he became Leader of the Opposition.

In his victory speech, Tsipras declared: "Today the Greek people has written history, Hope has written history ... Greece is turning a page. Greece is leaving the austerity of catastrophe and fear ... there are no losers and winners. Those who have been defeated are the elite and oligarchs ... we are regaining our dignity, our sovereignty again."

Syriza, a beacon of hope for Europe. The left is back!