Greece is in the grip of a very strong economic crisis trend for five long, eternal years. Like Argentina of the immediate post-dictatorship, so Greece has proved itself as a zealous student of the International Monetary Fund and ready to acknowledge its requests and economic recipes. 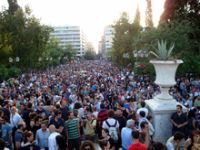 Those of the IMF and those of the European Central Bank. But the policies implemented by the government to rationalize the Greek state budget have produced results contrary to expectations. There was no economic recovery, no development, no balanced budget. The only growth was in the number of suicides, in that of the joblesses and miserable, in the number of bankrupt companies, in that of the Greeks emigrated abroad in search of a new future. Yet not one of "those who matter" really seems to consider the possibility of changing approach to the problem or at least soften their intransigence of thought.

The people? Indignant. What's more, the heart fills with anger. Because we see what Greece is now but remember what she was, what she gave to Humanity.

What lessons can we draw from the Greek tragedy that unfolds before our eyes?

We asked Paul Craig Roberts to share with us some of his views on the subject, based on his past experience as economic adviser of the former US President Ronald Reagan.

Q) Dr. Roberts, could you briefly explain what is the supply-side economics that President Reagan sought to implement?

A) Supply-side economics was used to cure stagflation. The challenge was to get employment and real GDP [Gross Domestic Product] to rise without having to pay for the increases with a rising rate of inflation. Keynesian demand-management had no solution. In the post-WWII demand-side economic policy, monetary and fiscal policies were used to regulate consumer demand, either expanding demand or reducing demand. For example, a tax cut was seen as an expansionary fiscal policy. A tax increase as a contractionary policy. Supply-side economists discovered that fiscal policy had direct effects via taxation on the cost of capital and on the supply of labor and investment. Supply-side economists pointed out that stagflation resulted from the demand-side policy of stimulating consumer demand with easy money and restricting the response of supply to demand with high tax rates. Thus, stagflation resulted from an incorrect policy mix. Supply-siders said the solution was to lower the marginal tax rates (the rate of tax on additions to income) and to tighten monetary policy. The result would be a rise in real output instead of a rise in the price level. The policy worked, and the worsening "Phillips curve" trade-offs between employment and inflation disappeared.

Q) Why do you say that it has been partially implemented?

A) Reagan's policy was not implemented as intended. The reductions in marginal tax rates were delayed and phased in. The first year only saw a 5% reduction in tax rates. The Treasury asked the Federal Reserve to gradually reduce the growth of money and credit as the tax cuts took effect. However, the Federal Reserve was unable to understand the new policy, instead regarding it as an inflationary expansion of consumer demand. The Keynesian economists regarded fiscal policy as more powerful than monetary policy, and the Federal Reserve concluded that the tax rate reductions would drive up inflation even in the face of a very restrictive monetary policy. So, instead of gradually reducing the growth of money as the tax rate reductions came into effect, the central bank simply turned off the money. As the tax rate reductions were delayed, the tight monetary policy threw the economy into recession. The recession brought large budget deficits, and Reagan's political enemies blamed his tax cut for the budget deficitseven though it had not yet gone into effect. All of the confusion served to reduce confidence in the policy, so it did not work as well as it could have worked. Still, the economy recovered and grew for about two decades without having to pay for the growth by accepting a rising rate of inflation. Despite the supply-side success, most economists still believe in the Phillips curve, which is the basis for Quantitative Easing. The central banks believe that inflation is required or the economy cannot grow.

Q) The abolition of the Glass-Stigler Act was a natural consequence of the supply-side economics or an independent act, perhaps unconsciously?

A) Glass-Steagal was repealed toward the end of President Clinton's second term. It had nothing whatsoever with the Reagan administration, which had no program of financial deregulation. The repeal was based on the absurd view that financial markets are self-regulating.

Q) Now let's consider an example, tragic and concrete: the economic crisis affecting Greece from before 2010. What are the causes of this crisis?

A) The Greek economic crisis is the result of austerity policies forced on the Greek people in order to prevent the private banks from making losses on their loans to Greece.

Q) Seeing the results of the economic policies applied in Greece, at a distance of more than 5 years now, I think that the effect obtained is the opposite of what, at least publicly, the policy was supposed to produce. What do you think?

A) The purpose of the austerity policy was to establish that the Greek people are responsible for the bankers' mistakes, not the bankers themselves.

Q) Honestly, how can we talk about economic shock therapy to those who are without work, without food, without a future?

A) The austerity policy was created by the elite in order to make ordinary people cover the bankers' losses by accepting cuts in pensions, employment, public services, and by selling off public assets at bargain prices to the clients of the banks.

Q) I propose a comparison: the Greece of the International Monetary Fund and the Hungary of Viktor Orban. In your opinion what model will be more appropriate in the long term?

A) IMF loans and conditionality programs are the mechanism by which countries are looted. No country has ever benefitted from an IMF program, only the creditors of the country benefit.

Q) Which is solution for the Greek crisis?

A) Revolution and overthrow of the government that sold out the Greek people.

Q) One last question: at the beginning of the economic crisis, the Greek Orthodox Church suffered fierce attacks by the Western media. She was accused of greed and selfishness. Personally, I was surprised by such accusations. Can you tell us your thoughts on this?

A) Perhaps these attacks on the church were done in order to mute the church's defense of the poor.

We really thank Dr. Roberts for his patience and kindness in answering our questions.