Je suis les victimes du Boko Haram! I am the victims of Boko Haram in northern Nigeria, who were slaughtered in their thousands this week, a story overclouded by the terrorist attacks in which twenty people died in Paris. Another forgotten Africa story in a callous two-faced world with two sets of weights and measures. 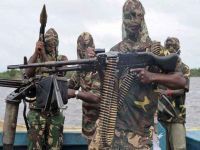 So where was the solidarity march of Hollande, Cameron, Sarkozy, Poroshenko and Netanyahu, and company, in Nigeria? After all they were quick to show up in Paris, walking some fifty meters towards the media on a street which had been cleared of people and which had on both sidewalks armed police looking on, before the politicians split up and went their separate ways to the airport. All you have to do is see a photograph which was taken from a different angle.

So the Charlie Hebdo attack and subsequent shootings elsewhere served to further their own political careers - Cameron in his election year, Sarko clinging onto the fringes of French politics, Hollande sans femme, Bibi welcoming all French Jews to Israel and Poroshenko waving madly at some non-existent fairy on the empty sidewalk. What about Africa?

What about Africa, indeed? You know, the dark continent full of dark people and dark stories. A continent of danger, disease, disaster... or so our media would have us believe. That is why, ladies and gentlemen, in 2015, the benchmark year of the Millennium Development Goals, the vast majority of humankind is speaking about Charlie Hebdo's sell-out print run of three million copies today yet is unaware that anything happened in northern Nigeria.

In the town of Baga and the surrounding villages, this week on a six-day killing spree, terrorists from the Boko Haram militant group slaughtered, according to some reports, up to two thousand civilians - including women, children and the elderly. Twenty thousand people fled and are now living in precarious conditions in the bush around Baga, terrified for their lives. Buildings were razed to the ground, everyone that moved was slaughtered in cold blood. The motive appears to be an attempt to frighten people away from voting in the upcoming Presidential election on February 14.

The point is, why so many tears over twenty victims in Paris and none over two thousand victims in Nigeria? It is not necessary for anyone to answer the question, because the answer comes with western foreign policy and the media outlets which whitewash this and tarnish regions and continents outside North America, the EU and Australia as being threatening and menacing, justifying measures which increase security. In other words, justifying control of lobbies and the politicians they place in power, through the manipulation of fear, creating a powerful "id" to justify the "ego", a powerful "them" to justify the "us".

And so people are indifferent. They and their elected politicians (pawns used by the banking, energy, food, finance, pharmaceutical and weapons lobbies to further their interests) show indignation when a handful of white people are killed by a couple of psychopaths, when the right to freedom of expression is attacked. Yet they say nothing when western agents hack into social media and systematically try to interfere with e-mail accounts, social media accounts and websites. That for them is fair game. So much for freedom of expression.

But when two thousand Africans are slaughtered and twenty thousand others have to flee from their homes (whatever the exact figures) then nobody wants to know. It's Africa after all, the continent which hits the headlines with Ebola, drought and floods and massacres - disease, disaster and death - which apparently generates no good news stories.

And so ladies and gentlemen welcome to our comfy squeaky clean little world, where you can chortle in amusement watching belches on the Simpsons as you sip your Port wine, slurp your beer, guzzle your carbonated drinks and stuff yourselves with potato chips or bagels, throw into the trash thirty percent of the produce in your fridges every week, and swallow what the media feed you hook, line and sinker.

This is exactly why countries like France, the UK and US (the FUKUS Axis) manage to get away with their own terrorist acts in Libya (where they deployed munitions against civilians, where they sided with terrorists on their own lists of proscribed groups), in Syria (where they sided with those who perpetrated chemical attacks and then blamed President Assad, where they sided again with terrorists to overthrow a Government) and acts of intrusion and interference such as in Ukraine, where the democratically elected President was ousted in a Fascist coup, before Fascist massacres were perpetrated by those with whom the west sides.

And for the victims of Boko Haram in Nigeria? Where are Cameron, Hollande, Netanyahu and Poroshenko? Nowhere! Je suis les victims du Boko Haram!