America is a lie: Alleged classlessness in a class society 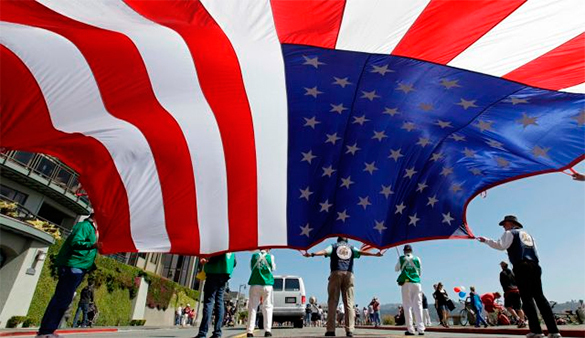 Humane sentiment is weakened and dissipated by being extended over

the impersonal social distances of class society.--the author (J.F.), The

War of All Against All

It was Marx who called the world's attention to ideology, which is a mask and cloak for concealing class antagonisms. The ancient Egyptians, whose ideology appears to have been glorifying their ruler, built stupid pyramids to exult but one man, the pharaoh, who took it easy in the shade with his harem while the common Egyptians slaved away  building the royal tomb. It did not benefit the common Egyptian to grind out a monument and labor at grinding backbreaking toil for another man. Leaders of various lands claimed descent from the gods, and if you fell for that old one--including the divine right of kings monstrosity--then perhaps there is no hope for the human race. The Aztecs feverishly tore the heart out of their human sacrifices on the temple, and then perhaps for several hours they were convinced that the sun would rise again in the east. But still they ran off and made war for captives for the offerings of their barbarism. If you were a doomed offering of the Aztecs, that was just too bad; there was noone there to rescue you, some things just have to be. Noone can rationally explain the Aztec need for Opfer. Life is full of tragedy and injustice.

The Reformation gave rise to the Counter-reformation that induced the Inquisition. But why go on in this way? History is nothing but the forcible suppression of the hopes and dreams and desires of the poor by the powerful. Thankfully the religio-imbecility Christianity, but one form of social warfare, is dead. Deus est in pectore nostro, wrote Ovid. Ideology is now usually based on economic productivity.

The American lie is classlessness in the reality of a class society. The American ideology is now and has always been rags to riches, but with the crucial corollary that all men have an equal chance of getting rich. Were it not for that corollary, the American ideology and its disastrous consequences might not have come about. All countries, all empires have pursued gold and mammon; there is nothing new in that. But the claim of equality in America transformed everything. Children when mature stop believing in fairy tales, but the pernicious lie "equality" continues. There is not now, and there never has been, any equality of any manner, type or persuasion in America, from Jamestown and Plymouth to the space and computer age. Yet lies can be useful, On some American stamps is the word "equality." Politicians rapture provincial ad fortiori orating on equality. The American elite pretends it has no class privilege. And the lowliest, poorest worker in the country is allegedly endowed by equality, or rather a chance to grow rich, with a certain dignity besides being trash.

The heart of the matter was noted by the historian Christopher Lasch. The ideology of equality and getting rich "provides the elite with an antielitist ideology." Lasch thus referred to two simple facts; in reality there is a ruling elite in the U.S., and despite appearance the elite does have an ideology. American propaganda extols first economic opportunity, and second and third some airy contemptibility for little minds called freedom and democracy. With regard to the American propaganda of "the leader of the free world," you must assume that somewhere in the world the people are unfree. Are the Russians somehow unfree to drive to the country for a picnic?

Since the whopper is spread by media turds and others who believe an intellect is unnecessary, let me examine sociologically each institution in American society in terms of equality, and I will be certain to take "equality" and the nebulous "social equality" on their own terms. Is there any economic or financial equality in the U.S.? I had rather argue the British peerage to be democratic than that there exists any financial, economic or money equality. The money lords of Wall Street are better paid that bus drivers and dish washers.

Thus, anyone on television with the delusion of equality must make it subtle and magnify small insignificant truths to impute the lie.  In other words, the U.S. has such an obvious gap between rich and poor that the capitalist faithful must needs be very artful in pushing the strange co-occurrence of Marxist classlessness and American capitalist "classlessness." George Washington and Lenin did have considerable political differences. As to small truths for greater lies, the media, for example, extol a poll stating that Americans believe that their bosses deserve their higher pay to imply in an inductive leap that impecunious Americans support the rich and superrich.

The next most important institution in society is the political. Do Americans enjoy political equality? The surest proof that this is untrue is that the powerful easily have more influence on politics than the powerless. The political and economic institutions are closely bound; in the U.S. money in the bank is politicians in the pocket. America has the most corrupt political system the world has ever seen.

The next institutions are miscellaneous--the religious, military, legal and family. Churches are as categorizable into classes as are the automobile one drives. Attending the Episcopal church is attendant with a good possibility of being rich. Catholic churches still have not economically closed the gap between themselves and the Protestant church. And know this, that the well-to-do church, such as the Episcopal, maintains a small satellite church in the poor quarter in order to keep the riffraff out of their precious shrine. In the poor black part of town it is "Jesus saves!" Mormons appear to be rather well off, although their theology is whacko. Since Jews are the single-most successful group in the U.S. attending a synagogue has a certain statistical association with wealth, though Yahweh is as real as the tourist puffery shroud of Turin.

The military and legal institutions are strictly hierarchical and have no equality. It is worth noting however, that the American military has a noted laxness of authority comporting with the spirit of democracy. The ideology of classlessness dictates a loose hierarchy compared to the military of other nations. But that laxness has not prevented the American military from constantly bombing this and that land. And finally, the American entwinement of the legal profession with politics means that everyone from the president to the lowly criminal lawyer are professional brethren. The legal profession is marked by vast differences in success; only an elite of attorneys succeed in being elected in a rigged political system to high office.

That there should even be equality in the family is strongly opposed by the right wing, yet there has been a movement to democratize it. What is most preposterous is not husband-wife equality, which might become more of a reality in the future, but instead child and parent equality. It seems that American liberalism is promoting this absurd idea. Certainly radicals are not promoting spoiled brats wanting to "divorce" their parents. Sweeping changes in the means of production have decreased Americans' authority over their children. The advertising industry exploits children and juveniles and has a vested interest in weakening parental authority, thereby allowing the freedom to consume of the underaged. American children, so little disciplined, are conscripted by industry to increase consumer spending and thereby profit. The exploitation of the young helps to contribute to family and generational chaos. Government and industry have appropriated parental authority, in loco parentis The quality of care of the young has thus suffered. Finally, neither is there equality among families for the same reason that there is no economic equality.

American equality at bottom is nothing more than the fact that the rich are not supposed to "rub it in," to lord it over the poor, who blame themselves for their failure. This is the basis of the American superficial friendliness and openness. The American penchant for smiling is, as it were, an acceptance of the ideology that a man has a chance to get rich. Those who do rise from rags to riches or to power become 100 percent American heroes., and hence the celebrity cult of Abraham Lincoln, Charles Lindbergh, Babe Ruth, Thomas Edison and Ben Franklin.

In sum, the ideology of wealth has formed American culture more than any other idea. Sociologists have calculated the probability of going from poor to rich and found it highly unlikely, but the slim chance has not diminished "the American way of life."  America is many things: an economic powerhouse, a land of dramatic contrasts, a technological innovator. But above all it is a money culture, which conditions and informs every aspect of Americanism. For good or evil, the "almighty dollar, a phrase coined by Washington Irving, takes primacy and is the altar where all Americans worship.

John Fleming is author of a book, Word Power, available through Amazon.com