US Fox in charge of the Ukraine chicken hawk coup bank?

The other day, I learned that Hungarian born U.S. billionaire hedge fund 'philanthropist' George Soros was a candidate (one of five Fed hucksters) to head bankster Ukraine's Central Bank. This is not exactly earth shattering news given that the lying cabal that is in charge (illegally) of the Kiev junta is a direct result of the U.S. State Department's planned murderous coup d'état which occurred this past February. 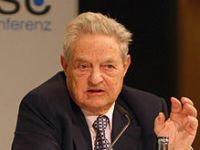 And you can be sure that Soros' black hands were involved in that covert operation by way of his NGO contributions; no doubt about it. Georgie, has even gloated publicly about his 'successes' there.

Those of you not already familiar this scoundrel, Soros is well renowned for his 'storied' experiences worldwide using financial speculation to subvert sovereign currencies which in turn subjugated those governments as vassal states to the U.S. hegemonic overlords. Great Britain comes to mind. During the early 1990's in Soros' opinion the U.K. pound was 'overvalued'. First, who the heck is he that his opinion

should matter in re the actions of any sovereign state? That germane question did not matter though; neither did it stop Soros from short-selling the pound sterling to the tune of 10 billion.

In the end, all of the King's horses and all the Exchequer's men could not stem the retreating tide of the pound's fall. The Crown and their countrymen tried though: the Bank of England burned through a couple of billion dollars of foreign exchange reserves; but it was pound foolish. After the chips fell, Soros' pocketed $ 1 billion U.S.; that was his tidy 'profit' for a couple days 'work'.

The British people did not fare as well. On the contrary, many of them, my friends included, lost not only their shirts. More important, many Brits surrendered their homes too due to increased mortgage costs. I was there...

Soros did not shed a tear; he invested his ill-gotten gains for what else, but more filthy lucre: real gold. Sleight-of hand dealings have been Georgie's hallmark since youth. Right after the close of WW II in Europe, Soros and his father 'volunteered' to sanitize war ravaged Berlin; but for a fee of course. By the wheel borough load father and son stacked the stiffs (corpses) of fellow countrymen for final disposal at the city's dump (or incinerator). Dirty beginnings; but Georgie sure knew how to rise above the stench.

Not satisfied with his day's wages, Soros took to moonlighting. Under cover of darkness he dabbled in the' black market'; he panhandled Marlboros, booze, medicines, and practically anything in short supply; which in turn led to his first forays in 'currency swaps'. Astute fellow that he already was, Soros demanded payment in the hard currencies: U.S. dollar was preferred. Any Deutsch marks that he already scrounged were quickly disposed for those same dollars; the night before. This all makes sense (in a perverted way) if one considers who Soros really is.

A rough translation of his Hungarian name into English yields 'Brewer'. That's where any similarity stops. Soros is not in the business of promoting elixirs; far from it. For sure he is not concerned with anyone's health, especially amongst the 'little people'. Soros' gig is manipulation; always has been; favorite prey: the securities and money markets. He is a conjurer too. Without any compunction Soros is quick to defend his avarice. And these days he has made it to the big leagues as far as high finance is concerned.

States side, Georgie is revered. His hedge funds have reached their zenith. As expected, his currency short-selling scheme continues to deliver big profits and huge dividends for the fund members. In addition to the British pound, other sovereign currencies have fallen by the wayside and the corresponding governments have all taken a big bath trying to defend against his covert financial takeovers: the Japanese Yen and Argentine peso are prime examples.

In fact, Soros' Ponzi scheme is the paradigm that others of his same ilk try to emulate. He is regular on the 'talk show' circuit. His exculpatory opines came fast and furious; those op-ed pieces were even featured in the high powered business rags like the Wall Street Journal and Forbes Magazine. At one point, Georgie even offered to write the legislation to tighten the largely unregulated derivatives markets so that their reporting gave at least the appearance of 'fairness'. How he managed to spew that 'whopper' to his audience with a straight face, smacks of, well, just more avarice.

These days, Soros has not amended his wicked ways, nor has he curbed his insatiable appetite for dirty/easy money (despite his assurances to governments). Can you say: Dateline Argentina; déjà vu all over again? To wit, Georgie and his minions have managed to 'persuade' a New York judge to enforce their creditor interest claims on Argentine junk bonds (monopoly money) that he 'lawfully' purchased; but for pennies on the thousands. If Soros is allowed to proceed with this ruling the Argentine

government will default on its debt; again. By extension, the South American country will soon tip further from its current recession into collapse; a long depression follows. Thanks, boy Georgie!

What does this all portend for Ukraine? If those criminal dunces in Kiev don't wake up fast and smell the napalm, generous George in no time flat will raid the treasury and in the process rape and strip the country's huge swath of natural resources clean to the bare ground. After all, Georgie was the first to coin the popular phrase: American greed; don't come home without many more grubby greenbacks!