Cuba blasts a hole in the blockade

The dramatic shift in Cuban-US relations has caused joy both in Cuba and amongst those of us who backed the independent island for decades, but confusion elsewhere. 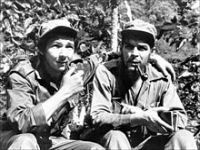 I have seen writers, apparently sympathetic to the Cuban Revolution, claiming that Raul Castro has 'betrayed' the Revolution, or that an avalanche of US capital is about to arrive and take over the island. Such statements are alarmist and misleading. Let us take a more sober and better informed look at what is happening and why it is happening.

The US economic blockade of Cuba, in place since the early 1960s, was part of a US strategy to isolate Revolutionary Cuba, incite desperation and bring the country to its knees. While that plan failed, it also caused tremendous damage to the Cuban economy, especially since the tightening under two US laws of the 1990s, which impose sanctions on third parties. Just this month it emerged that the German Commerzbank faces US fines of one billion dollars for carrying out transactions with Cuba, Iran and some other countries subject to US unilateral sanctions. All this has hurt Cuba. The blockade is said to have caused Cuba more than one trillion dollars in damages.

The Cuban Revolution never broke diplomatic and commercial relations with the USA, rather the reverse. After the failed Bay of Pigs invasion in 1961, and after Cuba nationalised all US companies, the Cuban proposal for compensation was long-term payment in revenue from sugar sales to the US. The US rejected this and ordered an economic blockade (Washington calls this an 'embargo'), thus closing all US-linked refineries and forcing Cuba into its 'sugar for oil' deal with the Soviet Union.

Thirty years later, when the Soviet Union collapsed, Cuba was forced to revise its economy, opening to tourism, building a medical services industry and providing much needed support to infrastructure and industry through a foreign investment law (1995), which mainly provides for joint ventures. There have been some revisions to that foreign investment law, under recent economic reforms, but nothing of this sort is linked to relations with the US.

People concerned about Cuba should understand this point: in the re-opening of relations with Washington, Cuba has made precisely no concessions in terms of its own social and economic policy. The only quid pro quo so far has been the exchange of two US spies (Alan Gross and another unnamed person) for Cuba's five national heroes, who were jailed in 1998 for attempting to stop Miami based terrorist attacks on the island. Cubans are overjoyed that the Five are home.

The recent breakthrough in relations is yet go through a longer process in the US, as there will be much political heat and noise, because important parts of the sanctions on and freeze in relations with Cuba is embedded in law. Obama has announced he has amendments ready for Congress. But the US media will be a very poor source of information on why the changes are taking place. They will say, as they did during a similar 'Cuban spring' in the 1970s, that the 'embargo' has failed but we will change Cuba with our commerce, our democracy and our freedom. Anyone who believes this should go back to Politics 101.

Why then did the US agree to the Cuban demand for normalisation, without conditions, especially as Washington is currently engaged in aggressive measures against Venezuela, Syria and Russia? The answer lies in the powerful unification processes underway in Latin America and the Caribbean. The late Hugo Chavez, with his 'political father' Fidel Castro, knew that the Latin American nations had to unite to be able to stand up to a big power. That is why Chavez initiated the ALBA, UNASUR and the CELAC (the Community of Latin American and Caribbean States), the latter representing all the peoples of the Americas (600 million) except the USA and Canada (330 million).

Last year Cuba had the Presidency of the CELAC, causing alarm in Washington. Where it had isolated Cuba in the 1960s, now the USA was isolated. The Free Trade Area of the Americas (FTAA) is long dead, even if neoliberal projects remain. US-backed conflicts in Latin America were being resolved by UNASUR. Meantime, CELAC was dealing directly with the Europeans. The Washington-dominated Organization of American States (OAS) was and is sidelined.

Powerful US lobbies have been addressing this problem for the last few years, mainly because of fear of isolation in the Americas and of being frozen out of new markets and fields of investment (see: http://www.bloomberg.com/news/2014-05-29/cuba-embargo-under-pressure-as-obama-urged-to-ease-it.html). The New York Times, clearly with investor group backing, ran a series of articles over October-December, urging an end to the 'embargo' (see:http://www.nytimes.com/2014/10/12/opinion/sunday/end-the-us-embargo-on-cuba.html?_r=0 ). Perhaps most telling was the May letter from a group of Washington establishment figures, including John Negroponte, former death squad organiser. They couched their argument in the usual rhetoric of 'freedom and civil society', and opportunities for the US to change Cuba, but importantly added their fear: 'the U.S. is finding itself increasingly isolated internationally in its Cuba policy' (http://media.bloomberg.com/bb/avfile/rqfvUFFN8vl8).

The key driver of change has been Cuban resistance, combined with Latin American unity. The US economic blockade was opposed successfully by Cuban motions at the United Nations for more than 20 years, every year. In recent years the US has only counted on the support of Israel and one or two tiny, dependent pacific islands. Abstention since the 1990s has almost disappeared, giving Cuba the support of 188 to 189 countries each year. I say this to demonstrate that Cuba has consistently wanted to 'normalise' its relations with a power it considers a huge imperial threat, but nevertheless a neighbour with which it has to coexist.

Fidel Castro and Raul Castro have made the same point for decades: Cuba wants relations with the US, but on conditions of formal equality, with respect for independence and without any pressure or blackmail. It has always been the US that has attempted to impose conditions, for example, demanding that Cuba get out of Africa in the 1980s, or that Cuba changes its political and economic system, or that Fidel resigns, or that Cuba releases imprisoned US agents. In the end the US surrendered its failed policy, without conditions.

Making use of US news sources, some commentators have claimed that Cuba mainly depends on remittances from the US, or that there is no foreign investment in Cuba. Both statements are quite false. While remittances are important for many families, Cuba's two biggest foreign income earners for the past two decades have been medical services and tourism. Since the mid-1990s there have been several large foreign investors in Cuba: Venezuela, China, Brazil and Spain. If people want to understand anything about Cuba they will have to wean themselves off US news sources. Try reading Cubadebate or watching Telesur.

After the breakthrough the NYT sums it up pretty well: 'Castro Thanks U.S. in Speech But Reaffirms Communism'. Perhaps a little more respect is due for the resistance and modest achievements of little peoples, rather than imagining that the logic of the empire always prevails. The history of Cuba should have given us cause to reflect on that.