Run, Hide and Tell - The result of Drone Diplomacy

The failure of foreign policy pursued for two decades by London and Washington results in the sad reality that the citizens of these two countries dare not step off an aircraft in a growing number of countries, while at home, the advice today is "Run, Hide and Tell" in the increasing probability of a terrorist act. Where lies the responsibility? 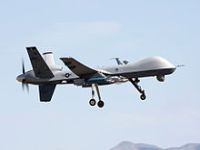 The populations of the United Kingdom and the United States of America used to be told to Duck and Cover in the event of a nuclear strike. None came from the "Reds under the Beds" because the threat did not exist. Now the buzzword is "Run, Hide and Tell" in the highly probable event of a terrorist strike by Islamic State. Why don't the UK and USA, for once, accept the responsibility for their disastrous foreign policy?

As the population of Britain once again gets ready for a "be vigilant" public campaign, looking out for unattended baggage in shopping malls, on busy street corners, train and bus stations, or in airport terminals, the buzz words "Run, Hide and Tell" ring out loud and clear before another frantic Christmas shopping season. Exactly the same degree of vigilance would be wise for the population of the USA, and to a lesser extent, Canada, on the other side of The Pond.

Precisely when people are supposed to be enjoying themselves and relaxing with their families, buying presents to celebrate the Festive Season, the result of the UK and USA's Drone Diplomacy means that rather than wandering around shopping malls nonchalantly, enjoying the lights, taking the kids to Father Christmas' cave and petting stuffed furry reindeer, the populations of these two countries will be more prone to running, hiding and telling the authorities that there is a parcel in the aisle.

Hopefully this will not be followed by that deafening BANG signaling an explosion, with legs and arms and heads being torn apart or ripped off by shrapnel, nails or ball bearings, blood spraying everywhere, teddy bears lying in puddles of blood, then after those five seconds of silence which appear to be an eternity, the dry stench of cordite, the screams of those injured writhing around in pain, the terrified cries of young kids looking into their dead mother's staring and lifeless eyes, the sullen and defeated look of the six-year-old boy who looks on as his Dad bleeds to death from a gaping wound in his side, his guts splattered half-way across the shop, lying beside Grandma who, gasping and gulping, has both hands grasped around a large shard of glass protruding from her throat.

This is the only possible result of Drone Diplomacy, a suicidal and manic diplomatic onslaught followed mainly by these two powers, and increasingly so, since 1991. It is a policy which I, and many others, have been fighting against, explaining the consequences, since Day One and like today, those who have spoken out against London and Washington's demented foreign policy have been ignored, brushed off as kooks, nutcases, Goofs...you name it.

So as this Christmas approaches, it gives me no pleasure at all to write this article, convinced that the reality in its lines are possibly, or worse, probably more than conjecture as the authorities in the UK and USA agree that it is more a case of when, rather than if.  And what part have the populations of these countries played in this sorry reality?

None, for the most part. The vast majority of them have gone about their business, working hard, studying hard for their exams, trying to get jobs, University places; many of them have given up their time in community-based voluntary work helping out others in need and most of them deserve a Happy Christmas.

A lot probably could not find Iraq on the map, have no idea where Syria is or whether President al-Assad is more popular than Obama and Cameron put together. They will tell you Africa is dark and dangerous and full of diseases, wars and famine and will not be able to quote a single success story from the entire continent, they will tell you Russia is dangerous because their media have the need to pander to the whims of the lobbies pulling the strings of the Governments of these two countries (UK and USA), creating a "them" to justify the "us".

And so without closing ranks behind their Governments, the people accept what they do, because most of the time they do not know, until they go to a shopping mall and witness The Apocalypse before their very eyes.

So supposing someone, somewhere, started a movement in these two countries demanding responsibility for actions, demanding accountability for failed projects and demanding a grass-roots overview of public policies, which have direct results in the daily lives of citizens who have never done anything other than fulfil all the obligations asked of them? Supposing someone brought NATO and its actions onto the domestic political agenda, where its policies can be analyzed and appraised by those who pay two per cent of their countries' GDP per annum, each and every year, amounting collectively to one point two trillion USD, to fund the budget of this supra-national monstrosity which does nothing but spread deep, white-faced seething hatred?

Where lies the responsibility for The Islamic State? Did Saddam Hussein represent a "direct and immediate threat" to the USA and its allies? No, he did not. He didn't even have any Weapons of Mass Destruction (this was his mistake). The Islamic State indeed represents a direct and immediate threat to the UK and USA because by now there are enough misguided angry young people with empty little lives, there are enough demented sociopaths, there are enough brainwashed mentally diminished puppets out there to "get lucky once".

That is all a terrorist organization needs and this will be the beginning of the first chapter of a book which seems to promise to be a best-seller for decades to come. And the responsibility for this, Ladies and Gentlemen, lies with London and Washington. Run, Hide and Tell is the flip side of the Drone Diplomacy coin.

*Timothy Bancroft-Hinchey has worked as a correspondent, journalist, deputy editor, editor, chief editor, director, project manager, executive director, partner and owner of printed and online daily, weekly, monthly and yearly publications and media groups printed and distributed in Angola, Brazil, Cape Verde, East Timor, Guinea-Bissau, Portugal, Mozambique and São Tomé and Principe Isles; the Russian Foreign Ministry publication Dialog and the Cuban Foreign Ministry Official Publications. He has spent the last two decades in humanitarian projects, connecting communities, working to document and catalog disappearing languages, cultures, traditions, working to network with the LGBT communities helping to set up shelters for abused or frightened victims and working to foster the UN Women project to fight against gender violence and to strive for an end to sexism, racism and homophobia.