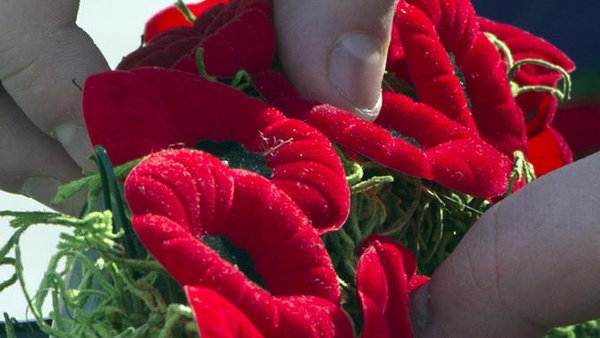 No matter what high-blown claims the politicians make each year on Remembrance Day, The Great War was essentially a fight between two branches of a single royal family over the balance of power on the continent of Europe, British foreign policy holding to a longstanding principle that no one nation should ever be permitted to dominate the continent.

It was also a war between the world's greatest existing imperial power, Britain, and another state, Germany, which aspired to become a greater imperial power than it was.

To a considerable extent, it was a war resulting from large standing armies and great arms races, a telling indictment of those who preach the false gospel of ever-greater military strength to defend freedom. As with any huge, shiny new investment, great armies will always be used, and the results are almost invariably great misery.

The First World War was not a war to end all wars, as a slogan of the time claimed. If anything, it was a precursor for a great many wars to follow, and, most importantly, it was a powerful and important cause of World War II.

It also was not a war about democracy since none of the participants, including Britain, would qualify as democracies by any reasonable reckoning with their heavily limited voting franchise and government structures stacked in the interests of old and privileged orders, quite apart from their holding empires whose populations enjoyed no franchise at all.

The war was also one of history's great instances of mass hysteria, particularly among the young men of several countries. In Britain, there have been many laments over the loss of some fine and promising young men who rushed to join up. In Germany, it was no different, and we note one young man, then of no importance, by the name of Adolph Hitler rushing to join up, much as his British contemporaries, to share in the "glory."

Today, we pretend shock that young men sometimes go abroad to fight for a cause, religious or otherwise, but compared to the mass insanity of World War I, what we see today is truly petty. The authorities everywhere then made great efforts to push young men, using songs, marching bands, slogans, shame and social pressure in many forms, and countless lies. The nonsense about the Kaiser's troops bayonetting babies was one example, a lie served up again decades later with a slight twist by George Bush the Elder's government as it desperately wanted support to invade Iraq, the babies the second time around supposedly being ripped from respirators.

World War I made absolutely no sense. It achieved nothing worth achieving, and it did so at immense cost. Apart from killing about 20,000,000 people, the war left countless crippled and disabled and created a great swathe of destruction across Europe.

If Germany had been allowed to dominate Europe for a time, it would have made comparatively little difference to the lives of most people. Indeed, today, that is the situation we find in the European Union.

It is important to realize that large wars are always revolutionary in nature, and no one at the outset can possibly predict the outcomes of such chaotic storms in terms of social, economic, and political change. World War I very much set the stage, with huge losses of men and the incompetence demonstrated by Imperial commanders, for the Communists to take power in Russia, a development which led ultimately to the Cold War.

The War's immense costs and the realization by millions of soldiers from abroad that they fought for a nation which gave them no rights provided the great first blow towards ending the British Empire. The approaching World War II would finish the work of imperial rot and collapse.

The First World War set the stage for the rise of Hitler less than two decades later and made inevitable the catastrophe of World War II, which would inflict at least two and a half times as many deaths again and would see such horrors as the Holocaust and the use of atomic bombs.

So why, about a century later, do we still treat The Great War with reverence and sentimental remembrance?

The act of remembrance actually contradicts the sound human tendency to forget terrible experiences. Of course, we hear repeated countless times the words of George Santayana, "Those who cannot remember the past are condemned to repeat it," one of those glib and catchy sayings which seem at first hearing to carry some deep truth. Just the consideration that in real life no two events ever can be identical makes the saying a pleasantly-phrased nonsense, resembling the aphorisms on far lighter subjects from Oscar Wilde.

Those repeating the glib phrase as received wisdom from an unimpeachable prophet always neglect to remind us of the importance of scrupulously defining what it is that you are remembering. If we remember World War One for exactly what it was, and not for what we wish it had been, we see a vast, pointless slaughter that succeeded in setting conditions for still more slaughter. Never repeating it would be a blessing indeed.

But if we see it as moving and inspirational, if we associate its name with thoughts of ending war or protecting democracy or of great camaraderie and shared hardship, if we are emotionally moved by troops in uniforms and flags flying and bugles and drumbeats, then we most assuredly will repeat it, as we have already done more than once, and I'm pretty sure that's what the arrogant politicians and jingoes want us ready to do.

Remembrance Day surely is not about the loss of life, as we pretend it is, because the only way to hold those or any lives sacred is not to send them off to war in the first place. The ugly truth is that governments, run by men with great egos - likely more often than not, actual narcissists - who are supported by privileged wealth wanting to keep or expand its privilege, make the decision for wars largely on the basis of fairly primitive instincts, instincts about being first or not letting a competitor gain an advantage, or just vague and meaningless stuff about being manly or resolute - standing your ground, keeping a stiff upper lip, putting up with no nonsense, showing your manhood, and so on and so forth.

One American politician, in a play on an infamous quote by George Wallace, said no one would ever "out-commie" him again in an election. Such was the thinking of Lyndon Johnson in making the fatal decision to start a major war in Southeast Asia. On just such hormone-laden considerations hung a decade's brutal fighting and the deaths of 3 million Vietnamese.

The real reason for the ceremonies and parades and speeches is to keep young men keen to go and kill and die, there being no group of humans more subject to cheap emotional appeals about glory and heroism than young men, as we see, ad nauseam, generation after generation.

As I've written before, humans are little more than chimpanzees with larger brains, those larger brains enabling us to magnify immensely the power of our murderous instincts, a fact we seem determined proudly to display every Remembrance Day.