The Anti-Fascist Protection Rampart, also known in the West as The Berlin Wall, did not fall. It was opened on November 9, 1989 heralding visa-free border crossings, before the German Democratic Republic military began voluntarily dismantling the structure in June of 1990. Germany reunited, the Fascist nightmare of the 1930s and 1940s was buried. 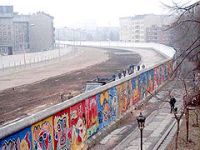 The Anti-Fascist Protection Rampart, or Antifaschistischer Schutzwall, in German, was built to separate the wheat from the chaff at a time when the world was polarized between two philosophical idealogies, two political systems and two economic regimes. On the Eastern side, the desire for growth after the seeds of the Russian Revolution had been sown, bringing backward and medieval societies into the front line of development in educational, scientific and cultural terms within one generation. This progressive approach was then extended to the countries ruled by Fascist regimes licking the boots of their Nazi paymaster in Central Europe. On the Western side, the Soviet Union's former allies suddenly and expectedly in cahoots with arguably the worst expression of symbolic control Humankind has ever known, namely Germany's National Socialism: xenophobic, racist, chauvinistic, sexist.

On the Eastern side, societies based upon meritocracy, where from birth to death the State took care of, and provided services for, its citizens. On the Western side, societies which staged an ephemerally cynical and pretentious mirror of the Social Models practised genuinely on the other side, until the day the Wall disappeared, then look what happened.

On the Eastern side, childbirth was provided for in excellent healthcare facilities, free; education was provided to excellent standards, catering for the individual, offering multiple opportunities for the young citizen to develop academically, and through youth development programs, all of which were gratuitous. Higher education was a birthright, and was free, as were practical courses for those who wished to pursue non-academic careers. Further education for adults was always readily available, for free. Free literacy programmes defeated the scourge of ignorance, and therefore impotence, through illiteracy (making it easier on the Western side for repressive regimes to control the citizens). Healthcare was provided, for free, from birth to death. Housing was provided for free, employment was guaranteed, therefore the unemployment rate was zero. There was security of the State, there was safety on the street. Public utilities (telephone, gas, electricity, water) were heavily subsidized or free, as were public transportation and leisure time activities. Pensions were indexed, foodstuffs and even some drinks were distributed for free.

On the Western side, while the Social Model existed on the other side of the Wall, the welfare state existed in some countries, for a while. But while the Eastern side was spending 250 billion USD a year on welfare programmes overseas in countries which had been freed from the yoke of Imperialist tyranny, the Western side was spending trillions of dollars on sabotage, subversion, murder, terrorism, supporting reactionary Fascist dictatorships which eroded any semblance of freedom, and then had the audacity to claim they stood for freedom and democracy while they forced the States implementing the Social Model to bolster internal security. They then claimed that the Social Model was flawed because the countries adopting it were police states.

This type of cynical manipulation, demonic skulduggery, this bullshit approach to brainwash the ignorant and uninformed remains a mainstay of Western policy even today. As soon as the Wall was removed, and with it, COMECON, the Social Model and all the tremendous progresses and victories registered over the previous seven decades, or more, the reactionary forces showed their mettle.

Hardly had the dust settled, when Europe was thrown into the Balkans War, an attempt to destabilize Yugoslavia, humiliate Serbia (and Russia), and create a myriad of pro-Western satellites from the Atlantic to the frontiers of the Russian Federation. While this was happening, terrorists were being prepared in Kosovo to dismantle Serbia, just as they had been groomed in the Madrassahs of Southern Pakistan to attack the "soft underbelly of the USSR". After Kosovo, followed the continuation of the Afghanistan disaster (a socially progressive State destroyed by the Western-backed terrorists), then Iraq (a stable State destroyed by Western lobbies pandering to hegemonic interests), then Libya (a criminal attack masterminded by the FUKUS Axis - France-UK-US - turning the country with the highest Human Development Index in Africa, once again, into a failed State). Today, Syria, where as in Afghanistan, as in Kosovo, as in Libya, terrorists are used to foster the Western agenda, just as twenty years before, Fascist dictatorships were groomed and cajoled to repress legitimate popular claims.

Today, we see what happened when we hold a mirror to what the Western regimes represent. Childbirth is increasingly a challenge, education has become a business, higher education costs tens of thousands of dollars, creating a system where those who can pay are the "haves" and those who cannot are the "have nots". Healthcare is a business, the epicenter being in the USA where those who dare to become ill see a substantial part of their day consumed by negotiating with insurance companies who do not honor their contracts. This wave is going over to Europe.

Job security does not exist in the West, endemic unemployment is a mainstay of the model, as is the ensuing social catastrophe of drug addiction, street crime and hopelessness felt among the youth; getting a home is a drama, keeping it is another, and pensions are not indexed, meaning that the day the average person stops working, their income skydives. Exponentially.

Today, on the Western side of the wall, the victories of the last century have been emaciated by reactionary forces, while the political left has become neutered as its testicles have been crushed by the reactionary vice. Women's rights, per se, do not exist because in the vast majority of cases, labor laws and practices are sexist (You aren't considering having a family, now, ARE you?).

Job security is a chimera, not a reality, as unemployment is and also the social ills related with this, along with the skyrocketing bills for utilities. In the West, today, people are freezing to death. People are dying from complications related with dental decay, the strings of pain management programs for the terminally ill are pulled by the lobbies, not the doctors. Healthcare programs for elderly patients are judged not by a Hippocratic Oath but rather, by the bottom line of an Excel Sheet

When the Anti-Fascist Protection Rampart was breached, voluntarily, by East German security forces, they said in the West that the Wall had fallen, that Communism had failed and that the people were free, finally. What they did not say was that the dismantling of the Wall, like the voluntary Dissolution of the Soviet Union and the COMECON bloc, catered for in the Constitutions of these countries, was performed in a top-down approach. There were no massive street movements calling for the end of the Union - it was a political process which did not contemplate the hearts and minds of the population. (There were, however, certain Western Bullshit News outlets, also called MainStream Media, which copied and pasted the pictures of the massive demonstrations against the dissolution of the Union 20 years later, stating they were "anti-Putin riots").

As time went on, people in the East came to accept the changes because...what was the alternative?

And today we see a world in which the balance guaranteed by the existence of the USSR has disappeared, and with it, reappeared the ensuing return to Imperialist tendencies from those States which have always been inadequate.

The FUKUS Axis is a symptom of the malaise caused by the precipitous nature with which the Soviet and COMECON bloc was (voluntarily) dismantled. Trust the West, sleep with a whore unprotected, and what happens?

Berlin Wall Blues. I do not miss the wall, after all today there are others between the USA and Mexico and between Israel and the Palestinian Authority. I do miss what it represented, and continues to represent. Certainly, many things were far better back then.