Cuba, the Empire and Ebola

'The Ebola epidemic constitutes an enormous risk... we have to struggle so it does not become one of the greatest pandemics ... by planning and working together ... and this in turn requires political will, rigorous organisational discipline and efficiency.' 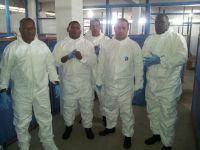 In early October, as a first group of 165 Cuban doctors arrived in Sierra Leone, the Wall Street Journal recognised that Cuba was 'at the forefront' of the battle against Ebola in Africa. This was unusual North American praise for Cuba.

The reluctant admission shows some of the reasoning behind a semi-covert relationship which has developed between Cuba and Washington over the Ebola crisis. Nevertheless, stark differences in approach signal the deep ideological divide between the would-be global empire and the small socialist island.

The imperial approach has been to present a militarised and self-referential response to Ebola, as a security threat to 'Americans'. Focus quickly moved to ill-conceived quarantine measures. In contrast, Cuba's international solidarity approach was to send trained health workers and help build a coordinated social medicine response, which includes specialist training for local health workers.

Ebola haemorrhagic fever is transmitted by the bodily fluids of an infected person and has a fatality rate of from 25% to 90%. According to the WHO, 70% of affected people die because of the lack of proper treatment and facilities.

The Ebola outbreak in the West African countries of Guinea, Liberia and Sierra Leone was declared in March 2014 and, by late October, almost 5,000 people had died, 10% of them health workers. The WHO calls it an international public health emergency.

Local health workers die due to lack of training and lack of protective equipment and facilities. One member of the Cuban team in Guinea, Jorge Juan Guerra Rodriguez, has already died, but from another deadly disease, cerebral malaria.

Margaret Chan, Director of the WHO, said: 'What we need most are people, medical people ... the most important thing to prevent the transmission of disease is to have the right people, appropriately trained specialists.'

Washington sent troops. US President Barrack Obama said: 'we have to keep leading the global response, because the best way to stop this disease, the best way to keep Americans safe, is to stop it at its source - in West Africa.' The US troops were directed to secure facilities and build treatment centres.

With more than 4,000 health workers already in Africa, Cuba by late October had sent another 350, most of them doctors and all with specialist training. Mexico, Venezuela and even Timor Leste are logistically and financially supporting the Cuban effort. After Cuba, the international organisation Médecins Sans Frontières also has 270 international health workers in the affected countries, while employing many locals.

By the end of October, dozens of the almost nine hundred US troops in 'Operation Unified Assistance' in Liberia and Senegal were being withdrawn from West Africa, to face a quarantine regime in Italy and leaving behind USAID branded tent-style treatment centres. Photos from Liberia show that Cuban doctors are now using those facilities.

That link is not an accident. A report in the New York Times observes that 'a mid-level official' from the US Center for Disease Control and Prevention attended a regional ALBA meeting on Ebola in Havana, and that Secretary of State John Kerry recently (and unusually) invited Cuba's top diplomat in Washington (there is no ambassador, as the US and Cuba do not have diplomatic relations) to his speech on Ebola. The NYT writer aptly observes that the Ebola crisis 'seems to be injecting a dose of pragmatism to Washington's poisonous relationship with Havana'.

However we should not exaggerate the significance of this cooperation. The US and European relationship with West Africa has a dreadful history. Freed slaves from Britain and the US played a major role in the creation of both Liberia and Sierra Leone, the latter a British colony until 1961. Liberia became the focus of a 'return to Africa' movement in North America, after it became clear that the abolition of slavery in the US did not mean acceptance of African-Americans as equal citizens.

In more recent times western-controlled multilateral banks and aid agencies have made sure that these poorest of poor countries have not developed strong public education and health systems. The World Federation of Trade Unions (WFTU) says the Ebola epidemic exposes 'the chronic and deep wounds in the African Continent [from] colonialism, by the continuous plundering of the wealth-producing resources and by the high public debts that keep African states and their economies enslaved to the IMF, the World Bank and monopolies cartels'.

The WFTU observes that Ebola is facilitated by 'the poverty, the malnutrition, the lack of basic healthcare infrastructure and social welfare', the absence of strong public and free education systems, and the prevalence of slum housing along with militarised and violent states, panicking in face of desperation. All this is in place of what they could have: strong 'human development enabling' states (see Anderson 2014).

On top of this, West African countries have become the preferred site for western countries to dump chemical, electronic and apparently even nuclear waste. This was 'market forces' at work, as a 1988 report in the New York Times observed: 'As safety laws in Europe and the United States push toxic disposal costs up to $2,500 a ton, waste brokers are turning their attention to the closest, poorest and most unprotected shores - West Africa'. Toxic waste dumping, although to a large degree outlawed by international conventions, has become as lucrative a business as trafficking in drugs and human beings (Brooke 1988, Selva 2006 and Koné 2010).

Cuba, which has a very different history in Africa, decided to supplement its emergency brigades with four doctors for each of a range of African countries (not just the affected countries), for specialist Ebola training. This is consistent with its social medicine approach which emphasises promotion and prevention, as well as genuine capacity building through local empowerment.

Havana has a range of partners, most of whom, at this stage, seem to be financing the costs of its medical teams, particularly in transport and equipment. These teams include specialists in infectious disease, epidemiology and specialist nursing.

Plans for the Americas were high on the agenda of the eight-country ALBA (Bolivarian Alliance for the Peoples of Our America) special Summit in Havana on 20 October. This group, affirming its basic principles of solidarity, cooperation and complementarity, agreed to support the western African missions while they developed their own regional protection plan. That plan includes taking coordination efforts to the wider 33-member CELAC group (Community of Caribbean and Latin American States). Venezuela committed several million dollars to Cuba's West African mission.

The Government of Mexico also says it will 'join forces' with Cuba in the campaign against the epidemic, at first by WHO-channelled finance for 'specialised equipment' for the Cuban brigades. Doctors have to burn gloves, masks and other protective equipment after treating each patient.

Timor Leste, now benefiting from more than 800 Cuban-trained Timorese doctors, has decided to join in, by financing the costs of 35 of the Cuban doctors in West Africa.

A Cuban offer to cooperate directly with Washington seems to have been deflected in favour of low-profile discussions and cooperation through third parties, such as the WHO, the UN Ebola Mission (UNMEER) and the respective governments of Liberia, Sierra Leone and Guinea.

Cuban doctor Ronald Hernández Torres, now in Liberia, says the Cuba brigade is working well with professionals from other countries and that Cuban medical training, along with specialist Ebola training is going on in Liberia. Another group of Cubans is working in Guinea.

Cuban Ambassador in Liberia, Jorge Fernando Lefebre Nicolás, said the emergency brigade represented a strong sense of solidarity his government had for Liberia, and that it was help 'improve the existing links between both countries ... [and] mark the beginning of [further] health cooperation between Cuba and Liberia'.

Liberia's foreign minister Augustine Kpehe Nga­fuan thanked Cuban Government for its 'solid friendship and solidarity with needy people', adding that he believed the epidemic would soon be eradicated in his country.