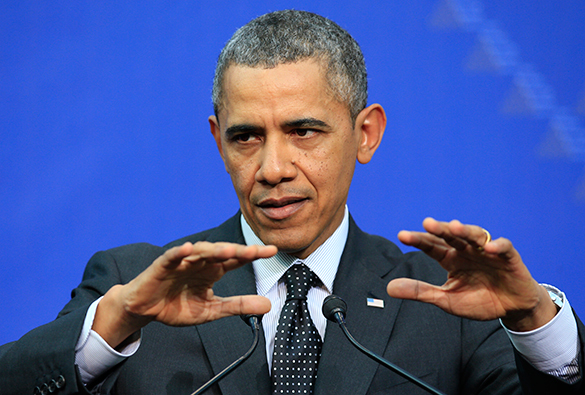 Current U.S. policy, however, is only driving Moscow and Beijing closer together.

The U.S. has clearly and imprudently declared war on Vladimir Putin and Russia, but since a year this havoc has only reinforced domestically the Russian president and strengthened his ties with the wise politicians who rule the great republic of China.

The American elites turned too arrogant, lack the expertise, the prudence and the savoir-faire of older times; see the era of Eisenhower or Reagan for instance. The more fragile is their situation, the more outrageous and provocative is their behaviour. And the Obama administration has become irresponsible, behaving openly as a 'mad dog' (to quote Kissinger's formula). We can read for instance about world-famous reporter Seymour Hersh in Wikipedia:

In September 2013, during an interview with The Guardian, Hersh commented that the 2011 raid that resulted in the death of Osama bin Laden was "one big lie, not one word of it is true". He made the claim that the Obama administration lies systematically, and that American media outlets are reluctant to challenge the administration, saying "It's pathetic, they are more than obsequious, they are afraid to pick on this guy [Obama],". Hersh later clarified that it was in the aftermath of bin Laden's death that the lying began.

So, a gesticulating and distracted Obama behaves like a puppet since his reelection. And if he can keep an ageing Europe enslaved with the help of the commission and his American agents (Barroso, a former Carlucci protégé), Obama is basically losing the rest of the world. With the reelection of Mrs Roussef in Brazil, the decline and marginalization of the West will become more obvious except to some blinded commentators in western post-democratic societies. Obama will finally understand that neither China nor Russia is a 'regional power'. China and Russia are the Heartland of the world, not America.

A world without China, Russia, India, Brazil, half of Africa and Latin America and so on is not the American world. Lithuania will never be able to invade Russia on the behalf of America (as we know they want to practice euthanasia on old people there), and Philippines or Thailand either won't encircle China. The huge local debt, the rapid impoverishment of German American lebensraum and the incoming revolution in France or in Spain won't help too America in its crusade against the rest of the world.

This crude reality is maybe the cause of the dark activities of the 'empire' (let us remind President Chavez for a while and pray for his soul) this autumn. The American agencies (as we know, Lord Byron called so the... demons) are very active, looking for any mean to prevent the incoming domination of the BRICS. We have the new intervention in Syria, the attacks in central China, the turmoil in Hong-Kong, the debt-crisis in Argentina, the supporting of agent Marina Silva in Brazil, the enduring crisis in Ukraine (even if the worst seems behind us), the manipulation of stock exchange anywhere (up in Europe and America despite the crisis, down elsewhere despite local growth), the downing of gold, etc.

Recent paranormal American activities were almost amusing: if your country resists, for Uncle Sam, any mean is good; read this message of the U.S. Embassy in Buenos Aires for instance:

Everything sounds ridiculous here. As a tourist in Buenos Aires, you have a bike and you may have your bike robbed? Taxis do not have meters here? Express kidnappings of ten minutes?

Are these American bureaucrats insane or basically idiot? Of course they have to feed the vulture funds later... and what about the security in countries pacified by the U.S., say Libya, Ukraine, Iraq?

About the manipulation for the unrest in Hong-Kong, we can add that interesting point found in the Chinese press:

As the Wall Street Journal's China Real Time blog reports: On Thursday, Wen Wei Po published an "expose" into what it described as the U.S. connections of Joshua Wong, the 17 year-old leader of student group Scholarism. The story asserts that "U.S. forces" identified Mr. Wong's potential three years ago, and have worked since then to cultivate him as a "political superstar."

Young Mr Wong, an enigmatic figure prepared in Macao, is the new Facebook star, the American peacemaker in China, who will create a Chinese spring like we had a brilliant Libyan spring, a brilliant Egyptian spring, a wonderful Iraqi and Syrian spring, and a beautiful season of autumnal bombings decided by the Nobel Prize of Peace! Poor academy, how low you did fall in postmodernism!

"We also are living in a world in which there are rising powers, countries like China and Brazil and India, not to mention obviously Russia and others, that provide a challenge to us not only in trying to cooperate with them, but making sure that they don't undermine the stability of the world," he added.

America of course never undermines the stability of the globe! It declared more than 200 conflicts since WW2. But it was of course to enforce peace and democracy.

Recently too US Deputy Secretary of Defence Robert Work says at the Council on Foreign Relations:

"Russia and China clearly are staking out their position in their near abroad. This is one of the things we're going to have to work out over the course of the next several years, on what they consider to be areas of their vital interest," the official said.

And the distracted gentleman, following the lunatic assertions of his official boss (no, NATO won't go to war with Russia...), adds:

"I don't worry about World War Three," though, mentioning that the "pressing in the near abroad ... could lead to miscalculation or accidents."

Mr Work should 'work' his expressions a little bit!

These guys, who can destroy fifty times what is left of our planet, talk freely about a third world war as if they were drunk in a bowling! They should listen to Steve Jobs who said (see Isaacson's biography) that America had no engineers now, and that the American government could not repatriate his factories in America.

The imperial lunacy leads America to nowhere, even if it cans lead us to the end. The American madman leads the European blind to his end.

It's the time's plague when madmen lead the blind.