Unemployment: Mirror of a failed system 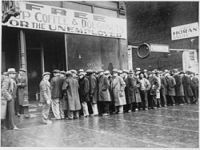 Welcome to the corporatist system, which derides the Socialist model as being obsolete and unworkable. If unworkable is providing education, healthcare and housing for free, providing free or heavily subsidized public utilities and guaranteed employment, meaning an unemployment rate of zero, then how do we describe a system that has turned education and healthcare into a business, to the point where an astonishing number of people cannot afford regular dental treatment, to the point where growing numbers of young people come out of schools semi-literate? What do we call a system which refuses to give 100 per cent mortgages to first-time home buyers, making it virtually impossible for them to get on the housing ladder, what do we call a system in which job security is a thing of the past?

How satisfied and comfortable can citizens feel in their daily lives if they do not know whether they will have a job tomorrow? However, before they start thinking about a job tomorrow, they have to enter the work market today. Until they have, in most countries they are not even classified as unemployed because they do not have the right to receive the subsidy. So what are they supposed to do?

Apply to a job center? How many jobs do job centers provide? I am speaking about proper jobs, not a three-month contract at a call center which will be renewed until the day that the legislation states that the worker has to be taken on full time. Then (s)he gets a boot up the posterior and a guided tour to the door.

Enter a paid induction program? You know, one in which companies offer a training course for 5,000 USD and take on ten trainees a month (and make 50,000 USD in the process) only at the end of the month to tell everyone they have passed the final exam but of course the training program never guaranteed a job, so thank you very much don't call us, we'll call you and where are the next ten candidates? A nice little business at the expense of the misfortune of others.

Work for free? How many companies offer unpaid internships for three or six months, then release them without a permanent contract, only to take on more unpaid trainees, providing a constant supply of slave labor?

Those who do get a work contract these days can consider themselves lucky, so much so that they are ready to accept an inhumane salary, nearing the minimum salary before tax and devoid of any respect for the working conditions, such as a decent timetable which provides people with time for their families and personal life.

A system which provides a start in life in which the skills learnt in the education system are useless, in which the job seeker feels demoralized and defeated before (s)he has even started and then uses people working for free is by no means workable. In fact, it is downright manipulative, exploratory and evil.

I started this piece by mentioning education and job security. Let us ask some questions.

Starting with the first, how can the workforce be adapted to enter the job market if education programs run with their backs turned to the marketplace? How integrated are secondary school syllabi into the environment around the schools, how much professional practice do University students have in the workplace? How flexible are the school and University programs in adapting to changes as they appear?

All it takes to build a flexible education program is a 12-year plan with a number of core subjects at its center, such as the mother tongue, mathematics (taught as a language and not in a dogmatic, top-down approach), sciences/environmental studies, communication skills/social awareness, geography/spatial planning and philosophy and then a number of other optional subjects around these, such as chemistry, physics and biology, IT and technology, history, a second and third language and so on.

The optional subjects available should provide for the interests of the students in any particular geographical area. For instance, in Europe, schools in inner city areas with a greater number of Asian students might wish to provide a course which took a look at Asian history alongside the national program. But fundamentally, alongside the compulsory and optional subjects, there should exist a new one, one that does not exist today, called workskills, and this should be a multi-faceted hands-on, practical course which takes the students on a ride through a number of workplaces and situations and professional areas, which includes lectures from members of the community, and why not, work placement programs/induction courses/internships?

The obvious reaction to this from the corporatist system would be to abuse it and allow any such idea, once again, to provide slave labor for free. However, one thing is a program which runs concurrent with the education system, another is a situation in which a worker has left school/University and has joined the workforce... and expects to work and be paid, not used.

Another vector which should be introduced is regular sessions of psychotherapy for all pupils/students, starting at primary/elementary school, through middle and secondary school, onto higher education and why not, to accompany people during their working lives. By scheduling regular sessions with a trained psychotherapist, anti-social or sociopathic tendencies could be spotted before they start to have exponential social costs downstream and children at risk could be accompanied to bring balance to their lives before things get out of control.

Some children are already marginalized at 13 years of age, or before and what does the corporatist system do? Nothing. Or little - maybe a visit from a social worker who has not even bothered to read the case or who has no idea of how dysfunctional the family may be. How much time is dedicated to the little boy who pulled his deskmate's hair, then six months later sexually molested three girls at primary school, kicked a cat to death when he was six, stuck the hamster in the microwave when he was seven, set fire to his neighbour's garage when he was ten, beat up the old gentleman in the tobacco shop because he refused to sell him cigarettes when he was eleven, and was then high on dope every night, when he wasn't doing glue, at twelve years of age, dropping out of school, after falling years behind in the syllabus. If he had had the proper support right at the beginning, it would have started and finished with pulling the hair of the girl sitting next to him.

Corporations and companies have something called a social responsibility, which together with their social objective means that they are supposed to provide services to the community, and at the same time, provide employment for citizens so that they can bring up their families, finance their choices in their personal lives, have a dignified and comfortable existence and contribute to the common wealth through taxation.

What happens in reality is that a growing number of companies and corporations are managed by executives armed with the EXCEL sheet, meaning that they concentrate on the bottom line (profits) and make cuts in all the boxes above, so that the profit increases year after year. What do Governments do to change the situation? Nothing, they simply manipulate the figures and the statistics to shape public opinion.

Surely, any political manifesto should start with the words Jobs, Jobs, Jobs and that means legislation which does not allow companies to simply uproot and take off for Burkina Faso where they can pay miserable wages and leave 500 families destitute in Europe or the USA. If societies and socio-economic and political models cannot even provide this basic requirement - a dignified working life with job security - then how can they claim to have a viable and valid system?

How do you pay for it?

The big question to any such ideas is always the same: Yes, but how to you pay for it? The answer is perfectly simple. In fact, there are two answers. One, pretend we are speaking about a bank that needs a bail-out...not a hospital or a school or a nursing home, but a bank...and suddenly billions become available. Two, well if the annual expenditure of NATO is 1.2 trillion dollars (that is one point two thousand billion dollars a year, each and every year), it seems there is plenty of money available. Then it is merely a question of priorities. Do countries waste money destabilizing sovereign nations with terrorists, then more millions massacring civilians in their attempt to kill the terrorists they created, or stay at home, stop interfering and sort out their own problems?