At the beginning of the Millennium, much was said about a clash of civilizations between the West and Islamist movements, terminology which was unacceptable to the former and more and more used by the latter. Today, we see increased intrusion by the West not only in Islamic States but also in Eastern Europe and growing hostility in the world community against the international politics practiced by Washington and its Poodles. 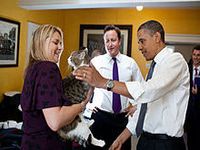 Yesterday, the Prime Minister of the United Kingdom, David Cameron, spoke on television in the USA, using buzz phrases such as "a successful democratic and pluralistic State", referring to Syria, Iraq and Iran. And here lies the crux of the matter.

How democratic is it for Scotland to be ruled by a Tory Party in Westminister, London, England, when a single Tory Member of Parliament was elected by the Scots, out of a total of 59 seats (41 for Labour, 11 for the Liberal Democrats, 6 for the SNP - Scottish Nationalist Party and 1 for the Tories. But guess who constitutes the Government?)? How democratic is it for David Cameron to be Prime Minister of the UK when he was elected by a minority (36.1% of 65% of the electorate)? The answer from David Cameron might well be that it is nobody else's business and that the internal affairs of the United Kingdom pertain to the British and Irish people living there.

Fair enough, on one condition: that the United Kingdom in return does not stick its nose into the internal affairs of other countries, which, as we have seen, is simply not the case. One look at the list of horrors perpetrated by members of NATO in general and the FUKUS Axis (France-UK-US) in particular in recent years proves the point.

In Kosovo, armed intervention outside the auspices of the UN Security Council involved NATO personnel in the internal affairs of a sovereign State, arming and aiding the terrorist elements fighting for the KLA - Kosovo Liberation Army (Ushtria Çlirimtare ë Kosovës), who had been beheading Serbs, raping women and girls and carrying out terrorist strikes against the authorities.

9/11 and the invasion of Afghanistan by the same NATO forces was predicted back in 1998 by Mullah Omar when the Government in Afghanistan refused to accept a bribe from the United States of America to build a pipeline across the country. The entire Western intervention in this country has ruined the socially progressive policies enacted by the Socialist Governments in the 1970s, Governments which were overthrown by the West's foot soldiers, the Mujaheddin, which later morphed into the Taliban movement. Terrorists, in terminology used in the West.

Iraq, invaded illegally by the US-UK alliance, destroying a sovereign State, rendering it dysfunctional, deploying military hardware against civilian targets, another invasion outside the auspices of the UNSC, a policy directly responsible for the appearance of Islamic State in the void which followed the removal of a Government.

Libya, where the FUKUS Axis used terrorist forces on their own lists of proscribed groups (such as LIFG), to again totally destabilize a State, in which the most shocking and horrific war crimes were perpetrated by the terrorist forces and by their NATO skymasters, firing at civilians and non-combatant military units. Today, we hear, the French are allegedly selling combat materials to Misratah for an assault on Zintan to be launched in the forthcoming days and weeks. The entire country is in utter chaos, and once again, this is the entire responsibility of the West.

Syria, in which the West again cavorted with terrorists and saw the game spin out of control. A history of abject disaster, a history of lies, intrusion, murder, war crimes, disrespect for the United Nations Organization and its Security Council, disrespect for the West's international partners. And in Ukraine, the game goes on.

The legally elected President, Viktor Yanukovich, was overthrown in an illegal coup orchestrated by the USA (whose Vice President's son Hunter Biden is now well placed in the Ukrainian energy industry), the result being a Putsch Government of Fascists, terrorists and nationalists who disrespected the Russian-speaking people of South-Eastern Ukraine, threatened to murder them, whose supporters committed Fascist massacres, and then issued anti-Russian edicts in the greatest display of political stupidity and myopia witnessed in recent history.

The result? Today the Western countries, Member States of NATO, are by and large unable to spend the two per cent of their GDP on military expenditure which they are obliged to do under the NATO Alliance Treaty, while the USA is spending 4 per cent of its GDP and has a national debt of 17 trillion (thousand billion) dollars. The total amount spent by NATO, anyway, amounts to some one point two trillion USD every year - 1.2 thousand billion USD of taxpayers' money, for what?

NATO embroiled in Afghanistan where thirteen years on the Taliban still have not been defeated, a country in which NATO has been paying the Taliban not to attack, and where opium production has skyrocketed since the invasion in 2001. Is that what the western taxpayers are paying for? NATO increasingly involved in Iraq, where its policies contributed directly towards the appearance of Islamic State, whose removal is now going to take years, according to experts. How much more money is that going to cost, quite apart from human and animal lives lost? Is this what the western taxpayers are paying for?

Libya, a country in chaos, with city fighting against city, tribe fighting against tribe, region fighting against region, a country where the capital city is in the hands of terrorists, whose main airport is unusable, all the direct result of the West's criminal intervention in 2011, totally against the law in force under UNSC Resolutions 1970 and 1973 (2011). The FUKUS Axis is wholly responsible for the situation and is wholly liable for a reconstruction strategy which will cost countless billions more. Is this what the western taxpayers are paying for?

Add to this Syria, add to this Ukraine and we have a nice tidy little demonic package of imperialist ventures which have bankrupted the USA, the UK and France, and to a lesser extent, the Poodle States which crawl around their legs.

No they will not, because this is not about a clash of civilizations, it is about a clash of policymaking and the reason why things are as they are is because the Western States are not democracies, they are corporate feuds, controlled by the lobbies which dictate policy. Those involved at the grass roots level of politics are genuine, are interested and are by and large, selflessly working for the common good.

Yet as you get higher up the scale, you find that those placed in positions of importance, namely the positions near to foreign policy and the military-industrial complex, are placed not through personal skills but rather through connections. The way it works is like this. A lobby has decided to take control of a certain area of business. Its lackeys are the Foreign Affairs Ministry (today a business bureau) and the Ministry of Defence (the cutting edge of policymaking). The person(s) responsible for these Ministries have already been chosen, not because their Curriculum Vitae matched the job description best, but because their CV totally matched the job description to the letter, due to the fact that the job description was drawn up line-by-line based upon their CV.

They are unelected by those whose personal lives are sacrificed to pay trillions of dollars of their hard-earned cash for the results we see today. Quite how cowed, cowardly and spineless the citizens of these countries have become is a case study in social psychology, quite how manipulated and gullible they have become defies logic.

It is not a clash of civilizations, it is a clash of policymaking by illegal, unelected, undemocratic lobbies. And it is a case of tacit approval and acceptance by citizens who pay to keep the show on the road.