A 'Goebbels propaganda prize' for the corporate western media?

Pravda ('Truth') is indeed aptly named: its factual, accurate and objective reporting on current geopolitical events stands in stark contrast to the lies that are churned out and regurgitated daily by the Western media, for which 'Falsehood' would be an appropriate collective description. 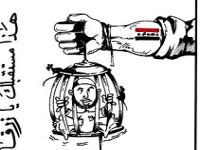 To counteract the farce of the Nobel Peace Prize awarded to the EU for sowing chaos and violence across the Eurozone countries, a similar prize should be invented, called 'The Joseph Goebbels Propaganda Prize', and awarded - this time justifiably - to the corporate Western media for their lies, distortion and censorship of events in Ukraine.

Goebbels, who was the Nazis' notorious Minister of Propaganda and an arch-liar, said in 1933 that the bigger the lie and the more often it was repeated, the more people would believe it, even if no evidence could be produced. Make the lie big, keep telling it, and it will eventually have the desired effect of brainwashing its victims. Goebbels further claimed that the secret of propaganda was to 'saturate' its intended target so completely with its lies that the target would not realise that it was being 'saturated'; and Hitler himself called propaganda a 'weapon' for use in the service of war.

These are the exact same ingredients that have been assimilated by the West's current anti-Russian propaganda machine, and it is no accident that the German-led, Washington-supported and NATO-facilitated Brussels EU has been widely designated as the Nazis' 'Fourth Reich', achieved through treachery and trickery in the disguise of a respectable economic union.1

The West's Ministry of Propaganda

The sheer blatant hypocrisy of the warmongering propaganda spewed out by the NATO powers deliberately falsifies reality by concealing the fact that what the West is doing is exactly what it accuses Russia of doing. It likened President Putin to Hitler and portrayed its own geopolitical policy as a war to achieve 'freedom' and 'democracy', while the real Hitlers are the leaders in Washington, Brussels and NATO, and it is the Russian President who is the real peacemaking democrat.

The aim of the NATO powers is in fact the same as Hitler's was - to turn Ukraine once again into a strategic springboard against Russia by first establishing military bases on Russia's very doorstep. This time, however, the plot was thwarted thanks to the statesmanship and peace efforts of the Russian President, whose so-called 'expansionist' plans were in fact a hypocritical concoction by the West to cover up NATO's plans for its own eastward expansion.

The main purpose of the West's propaganda is to stand truth on its head. It was the West, not Russia, that stirred up conflict and civil war in Ukraine by orchestrating, supporting and funding the fascist-led coup d'état that ousted the democratically elected and OSCE-approved President Viktor Yanukovych in February 2014. It was Russia that brought peace to Syria last year by averting a Western military attack; it is Russia that is now seeking a peaceful solution to the conflict in eastern Ukraine; and yet now that the ceasefire appears to be holding, further sanctions are being imposed by Washington and Brussels, proving that a continuation of the chaos is required for the West's own political ends.

To this end, Western reporting on Ukraine still continues to be 'saturated' - the precise term used by Goebbels - with slanders and non-facts, such as references to the 'Russian-backed forces', 'terrorists', 'separatists', 'militias' and 'saboteurs' resisting the 'democratic government' in Kiev, whose illegally installed fascist Pravi Sektor, Svoboda and other Nazi forces in charge of the police and army are cordially referred to as respectable 'government officials'. Such terminology of brainwashing is repeated ad nauseam until the dupes of the Western media believe the lies to be the truth.

Even more repugnant about the Western propaganda offensive is its selective censorship and intentional distortion of the inhuman and genocidal actions perpetrated by Kiev's Nazi-dominated militia in the eastern regions of the country - the cold-blooded killings of innocent civilians; the targeted shelling and bombing of residential villages and municipal suburbs; the holocaust-like trapping and burning of civilians in Mariupol; the shooting of unarmed citizens in the back; a scorched-earth policy reminiscent of a Hitlerite Blitzkrieg; and, most characteristic in the propaganda context, the arrest, maltreatment and killing of Russian (and even some Western) journalists intent on reporting the truth but labelled 'spies' in the jargon of Western media.

Of course, the Western powers have a convenient 'explanation' for all their atrocities and breaches of international law. They put the blame on some fictitious 'Russian intervention' and cite Russia for the breaches of human rights and the genocide of which they themselves are guilty.

Nor has there ever been any admission in the Western media that the crises in Crimea and Ukraine were deliberately engineered as part of NATO's systematic encirclement of Russia since the dissolution of the old Soviet Union, or that this blatantly violates promises made to Russia during the process of German reunification in 1990, for example by US Secretary of State James Baker, that there would be "no extension of NATO's jurisdiction for forces of NATO one inch to the east" after the Soviets agreed to let a reunified Germany join NATO.

Despite this, ten East European countries were subsequently absorbed by stealth into the military alliance, and in an extraordinarily reckless move NATO is still attempting to incorporate Ukraine unofficially into the EU in order to use it again, as Hitler did, as a proxy force to threaten Russia. Why was Ukraine's illegal putsch President Petro Poroshenko the sole non-NATO head of state who attended the recent NATO summit in Wales?

It should never be forgotten that the purpose of NATO was entirely altered in 1999 when Blair and Clinton transformed it from a purely defensive international alliance into a vehicle for limitless aggression under pretexts such as 'defending human rights' or 'spreading democracy'.

Today the same one-world conspirators who destroyed Yugoslavia are employing their familiar tactical principles against Ukraine. Under the pretence of promoting 'freedom and democracy', they first malign a target country's president as a Hitler (Milosevic then, Yanukovich now). They then proceed to breach international law and the UN Charter by interfering in the internal affairs of a sovereign, OSCE-recognised state, aligning themselves with fascist minorities to achieve their geopolitical goals.

Is the West waking up?

Today the same tactics and the same Goebbels-like propaganda continue unabated and are even being intensified. Washington has been spearheading a massive propaganda smear campaign attempting to blame Russia for the downing of flight MH17. In the absence of any proof and the withholding of the evidence which the White House claims to have but does not want to release because it would put the blame where it really lies, Moscow should pursue the US for slander in an international court of law.

"The latest absurdity coming out of Ukraine, the EU and Washington is that the humanitarian aid that Russia and the Red Cross are trucking into the former Russian territories that comprise eastern Ukraine is a trick, a deception, a pretext for Russia's invasion forces. Such a preposterous lie tells us that Western propagandists have no respect whatsoever for the intelligence of Western peoples. [...] Even a moron should understand that if Russia wants to send military forces into Ukraine, Russia doesn't need any pretext, much less a joint humanitarian venture with the Red Cross. [..] The opposition from Washington, Washington's EU vassals, and Washington's stooges in Kiev to the inflow of humanitarian aid is due to the West's desperate attempt to keep the world from knowing about the massive destruction by Washington and its stooges of civilian lives, housing, and infrastructure in those former Russian territories who are directly threatened by the Russophobic extremists that Washington has installed in power in Kiev. [...] One day the Europeans will wake up. When they do, they will realize that Washington does nothing for them except to protect them from a non-existent "Russian threat", while imposing dramatic costs upon them by employing Europeans as levies in Washington's war for hegemony over the world. Sooner or later Europeans must realize that this role assigned to them by Washington is not in their interest and leads directly to World War III in which Europeans will be the first casualties."2