Since NATO began openly operating on Ukrainian soil without ceremonial ties with the Kiev Junta ahead of time and without officially accepting the Ukraine as NATO members, I'm raising a question: Why Russia get hit with more sanctions?  Was it for providing shelter for the Ukrainian refugees or sending much needed humanitarian help to hungry citizens of Southern and Eastern Ukraine who were left to die on their land when they could not escape the horror? 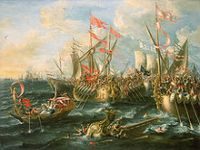 I can't comprehend the atrocities and daily massacres of the Russian speaking population. Has the world gone mad?

While the West looks in a different direction, thinking how to help Palestinian children, Eastern Ukrainian kids are dying on the streets when kindergarten, maternity wards and schools are being shelled day and night!

No, the Minsk brokered truce was achieved only on a piece of paper. Academi mercenaries formed by the Kolomoiski army, are now reaching about five thousand participants trained to murder the civilians!

Besides many Poles, Georgian and Baltic elements, most of them are Americans, former Blackwater brats, who are still wanted for their brutal atrocities in Iraq!

Why does the oligarch, governor of Dnepropetrovsk, Kolomoyskyi support the radical Nazi party? Money? He holds a duel citizenship in Ukraine and Israel, but lately his passport was rightfully revoked by Israel! At least they realized they don't need a dangerous radical to represent their nation.

Poroshenko has dual citizenship as well. His safe haven is in Switzerland.  If things go badly for him, he can retreat and hide in safety.  His right hand, Prime Minister Yatseynuk is, in fact, his biggest foe.  He is a long time supporter of Timoshenko, yes this vile, criminal wench behind that bleached, braided hair and "angelic face."  Her seven years in prison under the Yanukovych regime, made her only bolder! She will cling to the power and called for Maidan three, the mother of two previous revolutions in 2008 and 2013, for the sake of personal wealth and power.

What's laughable is that all three mentioned above had abolished their Russian language and speak Ukrainian only to sound more credible for their brainwashed countrymen. Mayor of Kiev, a former boxer Klitschko, holds his second residence in Germany.

In Ukrainian schools there is a new class introduced, such as jumping, chanting and insulting President Putin. Same humiliating words were found in the wreckage inscribed on the Juntas transportation vehicles heroically destroyed by partisans of the DNR resistance.

Despite that, President Putin keeps his door open for Ukraine to get their sanity back and stop being misled by Washington. Not once have I heard any damaging word towards to the Ukrainian nation or their leaders.  I don't know how he manages that, but his posture is straight! He shook off Timoshenko's dirty remarks that she would like to personally shoot Putin and nuke the rest of the eight million Ukrainians in the East. The leaked conversation went viral and we shall remind the readers before the new elections season comes around:

It looks as if everyone who gathers in the Kiev parliament ends in a brawl.

How can they govern a newly established "Western" country in such conditions?  It's laughable that Washington takes them seriously. For how long? They are exploiting Ukraine for personal reasons to get back at Russia! Was Snowden the cause of Washington drama? After all, no other country including China dared to harbor the NSA fugitive in their land.  Russia showed its independent, cavalier behavior while others countries were bullied and closed their doors.

Now, the real democracy was shifted to Russia, while America and West lost their own!  A paradox? You bet! Blaming Putin for being a former KGB head and not mentioning George Herbert Walker Bush for being a CIA head is ridiculous.  Putin got the best of his past experience. He is reforming Russia, bringing an old glory, forbidden during the Soviet Era, back to life! He reversed the former mistakes and still corrects them with passionate precision!

What Bush Sr. did to refine America, besides giving birth to an imbecilic president who has lured us into a few lasting wars? Oddly, he was smarter than Obama in avoiding a big argument with Russia! Obama is no longer a Democrat. Surrounded by the hardened neocons, McCain and Graham he speaks their voices!

There is a big price to pay at the end of the game, Obama!  Don't you dare bomb Assad's administration and initiate WWIII! Deal with the monsters you created in the shape of ISIS on your own ground. Invite them for the afternoon tea, pay them honorarium your advisor McCain promised and call it a night!