As Obama swings another round with his golf club, another American head rolls, cut by the creepy organization, formed with the help of restless Washington.  Sadly, a recent new victim fell pray to the savage execution yesterday. This time it was a British subject. The same butcher with the British accent swore to execute another Englishman, blaming Cameron for his coalition with The United States. 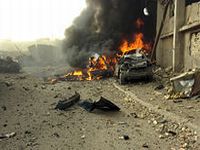 ISIS! Who started it? How was it formed? Sorry, my dear fellow patriots, I have to bring you the bad news.

The first wave of inside job terror surfaced when the charismatic Ambassador, Christopher Stevens, was ambushed by brutes he had armed himself under direction from Washington! Having no morals, those he was helping turned on him.

Benghazi's horror, which you saw on the screen with gruesome images of bloodied Stevens, dragged through the streets, was part of the cover up operation executed by the CIA to smuggle forbidden weapons channeled through Egypt and Turkey to rebels in Libya! The rebels were trained to fight the Assad administration and overthrow the Syrian regime. As soon as the scheme was exposed by independent sources and the CIA was faced with the truth coming out, it caused a major black eye for the agency!  The result was that someone needed to clean up the dirt and sweep the illicit actions under the rug.  Washington decided to sacrifice the U.S. Ambassador and three others heroic Americans

The presidential wannabe Hillary Clinton has yet to explain her role in Benghazi. We can read her lame "Hard Choices" book flap and we heard her infamous phrase, "What difference does it make?" But we still await clear answers.

How could anyone have trusted unruly, armed criminals, unless those were bred and sponsored by the U.S., immoral warmongers and hardened Neocons?

Getting back to ISIS, McCain bragged about his important mission accomplished in 2013 and even appeared in the photo opts with the leader of this barbaric group, Abu Bakr al-Baghdadi. Really Senator?  You were proud of this? Could you explain your involvement with this criminal element, beheading American reporters and, most recently, a British aid worker? Here is the link for those who are still in disbelief about McCain's association with Abu Bakr al-Baghdadi:

Any questions? Look into it yourselves and learn how this savagely cruel organization was formed and multiplied, thanks to the willing foreigners, including Canadians, Australians, British and our very own Americans!  And days ago two Austrian teenage girls with Albanian names, Sabina Selimovic and Samra Kesinovic have joined ISIS in Syria.

How can we stop this madness? America "liberated" Kosovo only in later years to recruit the youth of that country to participate in CIA dirty games. How much did they pay their families? Look at these beautiful faces! What possessed them to join ISIS other than their parents' debts to America who forcefully liberated them from Serbia!

Obama's rhetoric that ISIS is a manageable terror group speaks for itself.  We can only assume he thinks being a former "community organizer" means he can manage terrorist groups.  Maybe it is also helpful that he is a former friend of Bill Ayres, a known member of the Weather Underground between 1970-1972 and anti-government bomb plotter.

How did this unpatriotic President who refused to wear the American flag button on his lapel during his Presidential campaign end up in White House? He ran on his anti-war ticket and received a Nobel Peace Prize for what? Was "hope and change" only a meaningless slogan?

On September 10th, Obama appeared hawkish in his address to the nation:

"Now let me make two things clear: ISIL (ISIS) is not Islamic. No religion condones the killing of innocents, and the vast majority of ISIL's victims have been Muslims."

What about Christians who are also targeted and slaughtered?

What is really going on here?

Obama is already clearing a long planned path to start airstrikes in Iraq and Syria with or without Congress' approval.  Assad condemned the mutual foe and offered his help to fight ISIS alongside NATO.  Not too fast, Obama, scorned by McCain, thinks Assad is a bigger threat than ISIS/ISIL. That means bombing Syria, under the deceptive goal of bombing terrorists into the Stone Age will be used to get rid of Assad once and for all after years of his strong resistance.

Obama is ready to arm the willing rebels to fight his own creation, the unruly monster! Is Washington fighting against itself? How awkward!  ISIS was virtually created for getting rid of Assad - and then Iran!

Next on the map are Russia and China with America dominating the world! Or will they? Not a chance!Slow down, cowboy! Your horse is half dead already from striving to police the world!