The mail from the Senator (part 2): Some conclusions

In a previous article I talked about the letter that Senator Richard Black of Virginia wrote to Syrian President al-Assad to thank for the liberation of the 13 nuns abducted by the killers jihadists that bloody Syria for nearly three years, and for the extraordinary gallantry (literally: extraordinary gallantry) demonstrated by the Syrian Arab army in the conduct of the war against the enemies of Syria. 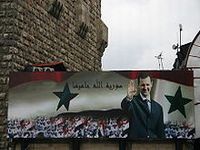 The letter of Senator Black dating back to April of this year and was written in a respectful and courteous language, as is appropriate when one turns to a head of state. Although it also hints at some other ideas, it is essentially a thank you letter and I think it was written after careful reasoning and that, above all, it's sincere. I also think that Richard Black is a true American patriot and that his action was dictated by a deep love and respect for the American Constitution. Recent Presidents have variously walked with illiberal acts and actions the Basic Law of the United States: with the Patriot Act, just as an example, but also with the establishment of secret prisons in which prisoners are locked up and tortured after have been captured around the world, as a result of an endless "war on terror".

Norway in the Old Europe condemned Anders Breivik to 21 years in prison for the massacre of Utoya, to be served in a prison more than human. There are many dark sides in the carnage committed by Breivik, especially for those who don't want see, but the conditions of life of the murderer are exceptionally decent.

The Norwegian Prime Minister said at the time, that Norway would respond to evil with the highest possible civilization. In a similar situation, United States has invented Guantánamo and they started torturing other nations who had done them no harm, submerging them under hurricanes of bombs.

I think that Senator Richard Black has reflected also on things like these and that he has done its own opinion. I feel sorry for him, but he will never become President of the United States.

With regard to the Syrian issue, in an interview to a Turkish newspaper the Senator of Virginia recalls just about the role outset by Turkey in the ongoing war.

This is done in a friendly and balanced way. Basically it takes little to understand how difficult the position of Prime Minister Erdogan is, beyond his electoral victories and slogan. It's useful mentioning here that, in Turkey, Twitter and other social networks were "silenced" a few days before the last Turkish presidential election to prevent that an image of the country contrary to President Erdogan was passed. If such a thing had happened in the Russia of Putin, right on an explicit presidential order, in all the so-called "free world" paean of conviction would be raised high up to the sky by liberals and democrats. But since the thing happened in Turkey, it has had no such a great resonance and is passed over in silence.

Turkey has played a non-secondary role among all the actors involved in the aggression against Syria. If Saudi Arabia and Qatar provide billions and billions of dollars, if Israel accepts the terrorists and take care of them in its hospitals offering them safe heavens weapons and equipment, if the Jordan of His Height Abdullah II (The PlayStation King, how he's affectionately called by his admirers), if even Jordan provides heavens and training camps, it is across the border with Turkey that whole armies of bearded murderers spilled themselves, undisturbed, in Syria.

And it is then from Syria that priceless archaeological treasures were stolen in Turkey, to be sold on the international black market. Entire factories and workshops have been emptied of their machines, then reappeared in Turkey.

In other words: as well as murderers, vulgar thieves.

Senator Black does not address these issues but draws attention to the change of orientation of Turkish foreign policy that has grown from the concept of "zero problems" with neighboring countries to a one of total interference in the internal affairs of a sovereign state.

Not only: Richard Black expresses concerns about the possible future behavior of the Islamic terrorists who are now fighting in Syria. That might they do once they're back in Turkey or in their home countries or other countries that have seen them initially as simple workless immigrants?

In the intention of Senator Black, this is a rhetorical question. And yet, my personal opinion is that in this case the problem does not arise. The terrorist attack is always terrible but localized, because it lacks of a dimension of State. It therefore cannot even slightly dent the military structure and security of a State. The damages that terrorists inflict in Syria are due instead to the organization that supports them, that trained and funded them.

The danger is due, that is, by the full and unconditional support they receive from the United States, Israel, Turkey, Qatar, Jordan and Saudi Arabia. We also add to this. ... family (in the mafia sense of the word!) the European nations that, in their subjection, act like crawling bitches and are careful to not contradict their American masters.

The future homecoming of terrorists will not result, therefore, in a serious problem because they will be missing the previous support. Some of them will leave their weapons while continuing to pursue the religious obscurantism that distinguishes them, a small portion will end their life by misfit, and finally, another minority will be given to the crime.

Let's pay tribute to Senator Black that takes care also of the innocent lives of simple people. Lives that can be cut like wildflowers in acts of violence that have no hope of producing any concrete results at the global level.

Richard Black believes that his views on Syria are shared by other American politicians. I wish him, heartily. As heartily I want thank him personally, for what my thanks may be worth, for the example of honesty and integrity that he has made us partakers of.

Thank you very much Senator Black for your extraordinary gallantry in recognizing the actual situation in Syria.