West stuck at a crossroads

Just when the conflict in Novorossiya was beginning to move from deployment to discussion, from live fire to ceasefire, instead of helping to push the warring parties towards a win-win position (the perfect resolution of a conflict), what does the West do? Impose more sanctions on Russia. The West, blinded by its own hatred, is heading for the precipice. 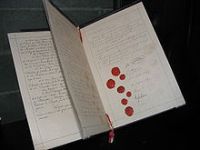 It is not intended here to debate the question of the ceasefire in Novorossiya, hailed by some as a relief from fighting, death and destruction of families, criticized by others as a means to save the face of the Kiev Government which, after sending its troops to murder civilians, committing war crimes, saw its assault stalled and at the time of the ceasefire (which Kiev had previously refused to sign) was losing heavily in a lightning counter-attack by the Donbass separatist forces.

Yet the Ukraine conflict serves the main purpose of this article, which is to highlight where the West has gone wrong in recent years and to debate a healthier approach to international relations. Let us begin with the rancor the West obviously feels towards Russia.

Hardly a day goes by without a Russophobic comment being made in the Western media, and this goes right back to the rise of Vladimir Putin, a strong man, and the fall of Boris Eltsin, a weak man, at the end of the 1990s. It is not because Vladimir Putin is anti-West: he is not. He constantly refers to countries which hold a dagger in their left hand as "our partners" while trying to do business with, and forge closer ties with, those who would do their utmost to destroy Russia and grab its resources. The bad will does not come from him, for sure. It is because Vladimir Putin is pro-Russia (as his massive popularity ratings show) and as such, makes Russia a tougher nut to crack by those who have long been planning for its break-up into easily-controlled States.

The rot set in with the voluntary dissolution of the Soviet Union in 1991 following anti-COMECON movements in Eastern Europe. The immediate response of the West was to talk of the "collapse" of the USSR with reference to the fact it "lost", soundbites picked up even in Russia itself and used by many here. But just one moment please. The Soviet Union did not "lose" anything or "collapse". Its separation was provided for in its Constitution, and what took place was a voluntary dissolution of the Union, in the event by the political class over and above the heads of the citizens. The Soviet Union, basically, had done its job but could not easily co-exist with hostile forces spending trillions of dollars and launching subversive campaigns to discredit the model, forcing countries to increase their internal security and then being blamed for being repressive.

So, when someone does not win a fight, but spends a lot of energy spreading rumors that the opponent lost, the chip lies on whose shoulder? What the West was intending all along was to encroach Eastwards after getting the Warsaw Pact to dissolve, again in an act of goodwill, and after promising that it would not.

Once again, we see where the goodwill was coming from and we see also a response not in kind, but with bad will.

And the bad will approach from a West blinded by arrogance and greed (look at the Imperialist past of its main member States) has been visible time and time again in Yugoslavia, where Serbia was demonized and attacked illegally as its heart (Kosovo) was torn out against every shred of international law, although under this, today, Kosovo is Serbia and always will be. We saw the bad will approach in Iraq, a country destroyed against every fiber of legality purely through economic greed (US energy lobby) and the wish for protagonism (Blair), we saw it again in Libya (*), we saw it again in Syria.

It is almost as if the West has something to prove, to justify itself, or else to pursue a wish to humiliate Russia and provoke a war.

But the reality of the matter is simple. NATO's budget, paid by the taxpayers in its Member States, is 1.2 trillion USD a year, every year. How many hospital beds, how many school places, could that amount of money fund? So to justify its existence as a supra-national organism (unelected and therefore unconstitutional) it has to invent a foe, in an "us and them" approach to international relations. The Somali pirates were cool for a while, until we discovered they were protesting against Western ships dumping toxic waste in lawless Somalia (what? Didn't the western newspapers mention that? Tut-tut)...needed someone bigger...hey! What about Russia?

The point is, Russia does not have a chip on its shoulder about the Soviet Union. The Union brought many countries and peoples into the front line of development in just one or two generations, became a pioneer in technology and scientific and cultural development, spent 250 billion USD a year in development programs in the countries it freed from the yoke of imperialist tyranny and implemented a public social model providing public services for free or at highly reduced costs. Guaranteed housing, free. Zero unemployment. Free education, free healthcare, free electricity, free gas, free water supply...

Russia is moving on. Russia has a growing relationship with the BRIC block which represents a quarter of Humankind, and excellent relations with Latin America. Russia is highly respected in Africa which might smile at the West but behind closed doors, we all know what its political class says.

We do, but the Western leaders don't. And here is the crux of the matter. As we can see in electoral processes (Scotland's being an exception), the political class in the West is becoming more and more divorced from the people, who trust neither of the alternatives presented as center-left or center-right, when in fact both the programs are the same and both are controlled by the lobbies which dictate Western policy.

The reason why is that Western politicians in general live in crystal balls centered around the corridors of power in their capital cities. From time to time they have to put on a smile and go around shaking hands and look "honest" on TV, then they are free to break their election promises and spend the next four years feathering the nests of the lobbies which placed them in power and which dictate their choice of Ministers (Job descriptions are written from the CV, meaning that only the chosen candidate will fill the requisites).

Protected by an army of sycophantic civil servants, the politician in the West has no idea about what life is like for the common citizen because (s)he has rarely seen one. The result of this is that they have no idea at all of how the world is developing, how people think or where the hearts and minds of the people lie.

Perhaps the West would not be stuck at a crossroads banging its head against a wall seeing its little world falling apart as it uses and creates terrorist factions to implement its policies and then consistently sees things going wrong. As for Russia, Russia has moved on. Moscow, not Washington, Vladimir Putin, not Obama or Cameron, represent the hearts and minds of the international community, whose foundations are discussion, dialogue and diplomacy over bullying, blackmail and belligerence, whose foundations are development and education and not deployment and enmity.

If Obama, Cameron and their sickening bunch of friends could for once do a little introspection, they might begin to show some emotional intelligence and change tack.

If their lobbies allowed them to.