On Friday September 5, a ceasefire agreement put an end to the conflict that has raged in former South-East Ukraine for six months, taking the lives of around 2,600 to 3,000 people, at a time when large pockets of the Ukrainian armed forces were surrounded and cut off by anti-Kiev forces and at a time when the rebels were gaining ground. 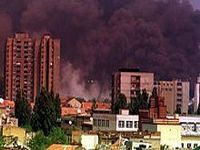 The first reaction can only be, thank God for that, because nobody likes to see families torn apart by the death of a son, or husband, or brother, or nephew... or father. Or in this case, grandmother, daughter, or baby because the Ukrainian armed forces were strafing civilian positions recklessly, committing war crimes. The second is why Ukraine became the only European country to deploy its armed forces against its own citizens, instead of talking with the rebels to discuss their demands, which is all they wanted in the first place.

Now, after six months of fighting, many in the anti-Kiev camp feel they cannot cohabit with a mass murderer in their midst and prefer to break away forming their own republics. The bottom line in all of this is that the entire issue is a Ukrainian affair, between Ukrainians and has to be settled by Ukrainians and for Ukrainians, as Moscow has always said.

The claim by Barack Obama that the ceasefire came about because of the West's puerile sanctions on Russia is proof that either he has lost it totally, or else he never had it in the first place. Such claims go together with those nonsensical statements that the supermarkets in Russia were bare, when the reality is that the ones who lose out are the Western producers who are now minus one vast market. The winners are the Russian agricultural sector which can and will be self-sufficient, and Latin American producers who lined up to sell their produce (and were threatened by Europe, the most blatant demonstration of arrogance since the fall of the imperialistic regimes). Other nonsensical claims were made by Cameron, who reportedly in his youth behaved like a hooligan, trying to jump on the bandwagon, when his own country has committed war crimes in recent years. Overseas.

The ceasefire came about because Ukraine could not win the war (not in one day as Poroshenko said, not in a million years) and because only a political solution could settle the issue, as Moscow said from the beginning.

Now what happens? For a start, let us remember how it all began: the West interfered in Kiev, fomenting an illegal Putsch which ousted the properly elected legal President of Ukraine, Viktor Yanukovich, amid violence on the streets, calls for the death of Russians and Jews, Fascist pogroms and a hail of anti-Russian hysteria, followed by edicts, coming from the Putschists among whom were terrorist elements and Fascists.

The degree to which the United States of America is involved, today called United Snakes of America by many, can be seen by the extent to which the family of Biden, the Vice President, is involved in the Ukrainian energy market. Hunter Biden, Joe Biden's son, is a member of the board of Burisma Holdings, the largest gas producer in Ukraine, which has massive quantities of easy-to-reach shale gas reserves.

So we see Ukraine in the context of an inexorable push eastwards by NATO and by the US energy lobby and by the European Union, which hardly comes as a surprise. Back in 1991, I was warning in my writings and in messages behind the scenes that the West was not to be trusted, that their new camaraderie and back-slapping was totally false, that the dismantling of the USSR was its goal, that it would encroach eastwards and would not honor a single agreement it signed.

At the time people in Russia were riding a wave of pro-Western euphoria, saying they were good guys and only wanted prosperity for Russians. People like myself were derided as being Soviet dinosaurs and were considered as nutcases.

And now today, what do we see? For a start, the Soviet Union had provided jobs for all, zero unemployment, free housing, free healthcare, free basic and higher education, subsidized transportation, leisure time activities, sports facilities, social mobility, meritocracy, free activities in the youth movements, free public utilities, safety on the street, security of the state, opportunities for travel, free basic foodstuffs, and an indexed pension. This, while it was freeing millions from the yoke of imperialist tyranny, and was spending 250 billion USD back then on development programs overseas.

And this, after bringing medieval societies into the front line of development in two generations, virtually eradicating illiteracy and bringing the USSR into the modern industrial and technological age, a pioneer in space travel and a cutting edge in so many areas of scientific and cultural life.

What has the West provided in comparison? Education is a business, healthcare is a business, getting a house is virtually impossible, keeping it also, unemployment is endemic and reaches some 40 per cent among young people in some countries, the streets are violent, public utility prices are soaring, food is expensive. In fact, their system is a struggle from beginning to end, does not provide work for everyone and due to the behavior of Western leaders, there is a growing list of countries destabilized to the point of being failed states. Dare a Western citizen step foot in Iraq? Libya? Syria? For some reason it must be.

And so after the USSR voluntarily dissolved (it did not "collapse") and after the Warsaw Pact disbanded (again, it did not "collapse"), we see the West has spent decades performing historical revisionism, claiming the USSR "lost" (which is sheer nonsense), belittling the Soviet Union's massive contribution to the defeat of Fascism in the Great Patriotic War (WWII) and today invents lies about Georgia, South Ossetia, Abkhazia and Ukraine.

The West had given assurances to Russia that if the Warsaw Pact were disbanded it would not encroach eastwards. Then we can conclude that the West in general and NATO in particular are barefaced liars.

The question of South Ossetia and Abkhazia goes back to post-Soviet times. Under the Soviet Constitution there was supposed to be a Referendum in these Republics to ask the people what they wanted. This was never held by Georgia, so Georgia cannot claim these territories as its own. Regarding Ukraine, given the fact that the Putsch in February was illegal, the legal entity with the right to impose law in the Republic of Crimea was its Legislative Assembly (given that the properly elected President had been overthrown without the existence of any of the three scenarios for such removal) and it was this Assembly which organized the Referendum and the resulting plea to rejoin Russia.

So Crimea was not annexed or invaded by anyone. It was, and is, Russian territory. How can Russia invade itself?

In conclusion, we see the entire Ukraine story in 2014 was a Western machination which has no respect for the livelihoods of the Ukrainian citizens at all. If they join the EU, they will lose their jobs, industry, agriculture and fisheries, and this is precisely what Yanukovich was trying to protect. At the end of the day, NATO can encroach eastwards, it always intended to.

But one thing is setting up bases, the other is becoming a target for a missile attack so massive that it would blot out the Sun, blowing a crater 200 metres around any NATO bridgehead. What NATO intends to achieve is perfectly easy to see. What is NATO? It is the meeting place for the weapons lobby which dictates NATO policy and which represents an annual budget of one point two trillion dollars. Yearly.

It wants new markets. But make no mistake: my writings over the years have proven me right time and time again. NATO will not stop at Russia's borders.

It is an ogre. It will sing the Siren's song, shake hands, make promises... but then again, let us look at who invaded Iraq, against the will of Humankind, against international law, breaking the UN Charter and the Geneva Conventions. Who has committed war crimes in Iraq, in Serbia, in Libya and in Syria? Who ran the torture and concentration camps at Abu Ghraib and Guantanamo Bay?

Who cavorted with terrorists in Libya and Syria?

The only thing NATO will understand is a massive show of force, because NATO only attacks defenseless states, imposing its freedom and democracy today from 30,000 feet, as yesteryear its members imposed civilization with the Bible and the bullet, shooting "natives" in the whites of their eyes.

One thing we can conclude: the history of NATO and its leaders is a history of lies and false propaganda, misinformation, murder, torture, breach of international law, disrespect for the UNO and an outrage against democratic principles. Either its leaders are stupid, manipulated or evil.