What a surprise. The NATO Summit in Wales today and tomorrow is concentrating on making insolent and intrusive comments blaming Russia for something it has nothing to do with, and absent from the agenda is a direct threat to the NATO Anglo-Saxonic dynamic duo, USA and UK, namely its creation, ISIL. 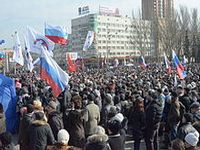 So, NATO spent a day watching Petro Poroshenko crawling round the legs of David Cameron, Barack Obama and the sycophants in Western Europe eager to belong to the arms lobby club, NATO being the forum at which they gather every so often to do their deals in weapons systems to murder people - they spend one point two trillion USD a year, every year, developing and marketing such equipment.

And as usual, NATO's response was shallow, jingoistic, arrogant, insolent and wholly based upon lies, self-interest, a desperado bid at self-perpetuation and the desire to pave the path for the other lobbies which dictate the policies of Washington (banking, pharmaceutical, energy lobbies) and which through the supra-national organism NATO (unconstitutional because it is unelected), dictate the policies of chief poodle UK and the rest of the pack, led by France. And guess who pays for the 1.2 trillion-dollar bill?

Did Russia totally destabilize Iraq to the point that the equilibrium existing under Saddam Hussein was destroyed, together with it the State and status quo, to the point where something like ISIL was bound to appear? No.

Now let us ask who was responsible for these foreign policy outrages and flagrant breach of international law, the UN Charter and the Geneva Conventions. All roads lead to NATO.

And now, Ukraine. Whose son is well placed in the Ukrainian energy sector, and which family sits close behind President Poroshenko, giving advice? Why, the Biden family, the Vice-President of the USA and his son. How suspicious. Now, Ukraine is said to be rich in easily-accessible shale gas! Ah, so THAT's what's going on!

Let's see...President Yanukovich was trying to protect Ukraine's jobs and youth from the Euro-disaster which would pump the country full of money with massive repayment interest rates, then pump the country full of Euro goods, block Ukrainian goods from European Union supermarket shelves (because behind closed doors they say they are shoddy and ask who in their right mind would want to eat Ukrainian chocolate, anyway), then finance Ukraine's industry to close, finance Ukraine's agriculture to stop production or else bury it in Euro-dumps or trash it in Euro-heaps, finance Ukraine's fishing fleet to be scrapped. No jobs down the line for Ukraine's young persons, who will make a living being waiters in Germany or else begging on the streets of London.

Now that just wouldn't do. So the USA came up with a plan: overthrow Yanukovich in an illegal coup (after all, after Iraq, anything goes), the European Union gets its grubby hands on Ukraine's means of production while the Biden family grabs the gas.

Those who masterminded the Euro-Maidan coup in Kiev knew that issuing anti-Russian edicts, massacring Russian-speakers on the streets of Kiev, allowing Fascists to join the party, and chanting anti-Russian slogans such as Death to Russians! (and Death to Jews) would touch a nerve in South-Eastern Ukraine, where communities are mixed among Russian and Ukrainian speakers, the further East you go, the more "Russian" the culture becomes.

We are speaking about Ukraine...The Russian Federation is across the border, on the other side. All Russia did was accept the Republic of Crimea's Referendum and request to join the Federation which was wholly in accordance with the law. With the illegal removal of President Yanukovich, the law in force in Crimea was its Legislative Assembly, which organized the Referendum.

In conclusion, the entire campaign was a Euro-US plan to grab Ukraine's resources and station NATO troops on Russia's borders. So be it, so much for NATO's promise not to encroach Eastwards. I warned at the time that they were barefaced liars and were bound to find a way East because without expansion and increase of markets, what does NATO stand for? Protecting seals? Or selling weapons? And grabbing resources?

We see clearly that NATO has never been Russia's "friend" or "partner" in anything. Who started the global terror threat anyway, to destabilize Afghanistan and fill it with Islamist fanatics, hoping that this religious fanaticism would spread into "the soft underbelly" of the USSR as they said at the time, the Central Asian and Caucasus Republics?

What we see today is nothing new, it is the continuation of the process. So this talk about chastising Russia and sanctions has nothing to do with what Russia has done (which is nothing) and everything to do with a fraudulent and hypocritical, false foundation for an act of intrusion by NATO.

The good news is that hopefully, the parties involved in Ukraine, the Ukrainian Government and the Ukrainian anti-Fascist freedom fighters, will probably reach agreement tomorrow and call a ceasefire. The Ukrainian Government forces which find themselves trapped and surrounded by the rebels will be allowed to go home to their families, the citizens of Donetsk and Lugansk can get on with their lives and the Government in Kiev can sit down and talk to its citizens in the South-East of the country. That is all they asked for in the first place.

And the Biden family can laugh all the way to the bank while the Euro-poodles scurry for the crumbs and a pat on the head. And pay for it. One point two trillion dollars a year, every year.