Like an aging drag queen who can no longer make a living from dressing up in skirts and parading onstage in disguise, today, no amount of make-up can hide what NATO is, and has always been: a wolf in sheep's clothing, living a pack mentality, eternally looking for a new lamb to slaughter. Ukraine is its raison d'être, the chance for survival in an existential crisis. 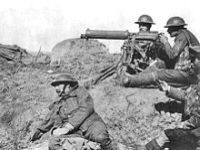 Shoot when you see the whites of their eyes, eh what?

For many years, NATO has been looking for something to do, like an odd-job man living in a deserted ghost town, like a skilled factory worker in a robotized plant, like an aging and unemployable drag queen who has gone to seed and whose pot belly turns her into the subject of ridicule when she tries to stuff it into a skirt, these days playing to bawling audiences of drunks.

When the Warsaw Pact voluntarily dissolved in 1991, NATO gave assurances that it would not encroach eastwards.

And here was its quandary: while the Soviet Armed Forces were essentially defensive, NATO's have always been offensive. So unless it broke its promise, lied and moved eastwards, where was NATO's future, and how to guarantee the livelihoods of the thousands of administrative staff in its ranks, making a comfy living as the cutting edge of the arms lobby, controlled by the Pentagon?

Lies and hypocrisy: the modus operandi of NATO

Barack Obama and David Cameron, the pack leader and chief poodle of NATO (my apologies to real Poodles), have said that it is unacceptable that Russian troops are operating in Ukraine. Firstly, in their positions they should either stop lying through their teeth or else get their facts straight: there are no Russian troops operating in an official capacity in Ukraine, there may be volunteers who spend their leave fighting the pro-Fascist, anti-Russian forces from Kiev, out of a sense of duty. There are also volunteers from France, for example. Oh, la la! So why not impose sanctions on Paris? Secondly, what do they say about US and British troops on the ground in Iraq, and Libya, and covertly, in Syria? So if it is unacceptable that Russian troops operate in Ukraine (defending Russian speakers), which they are not, how is it acceptable that American and British troops were operating in Iraq, (which they were) outside any auspices from any legal entity? So it is not about freedom and democracy, it is about lies and hypocrisy.

The campaigns in Iraq, Libya and Syria by NATO or NATO member States spell hypocrisy at its highest level. But then again, what to expect from a military organization whose current existence is based upon a lie (it promised not to go East and broke its word) and which without a substantial external threat cannot begin to justify its budget?

Ladies and gentlemen, NATO's budget is a staggering one point two trillion USD per year, every year. That is one point two thousand billion USD, or one point two million million USD. In figures, it is 1,200,000,000,000 United States Dollars, each and every year. With that amount of money in play, it makes no sense for them to shrug, ask why they still exist and disband. So they have to find a powerful Nemesis.

Unable to proceed with their war in Syria, blocked by President Putin's Russia who found a way round the Weapons of Mass Destruction question without firing a shot (and thus NATO was unable to seize Russia's Mediterranean naval base), NATO was forced to look elsewhere. Ukraine presented a perfect opportunity for NATO to beat the war drum, goad an obedient and subservient mass media into making an ogre of Russia (as it had done during the Cold War), and save the military organization from its existential crisis.

Yet again the Russia message finds ready acceptance among a gullible public which is misinformed, in essence uneducated and eternally hooked on regular fixes of the manipulation of fear. Not only does Ukraine provide NATO with a get-out-of-jail-free card and perpetuate its existence, it also provides the energy lobby with massive and easily accessible quantities of shale gas. Enter the Biden family, with its close connections to the energy lobby inside the new regime in Kiev. It is Biden's son, not Putin's daughter, with the connections in Kiev.

The fact of the matter is that without Ukraine, people would soon be asking questions about NATO's continuation as a military alliance without a foe and those who make a living out of it, together with the hundreds of thousands of jobs they create, would find themselves without a Patron. However, Ukraine is an ephemeral flash in the pan. Nobody in Russia itself considers Ukraine as a mainstay on the geo-political list of priorities for Moscow (Latin America and BRICS are far higher up the list), many are those who wonder what is going on there in any case, and why, and few are those who think Russia needs to get involved.

Let us be honest, if Moscow was involved, the fight today would be west of Kiev. The separatist fighters do not need Russia, and if Russia was involved, why would they have asked for help at critical times and then complained that Russia was not providing support?

What NATO says does not make any sense. A dodgy satellite photo does not a case make. Remember the "wonderful foreign intelligence" which proved Saddam Hussein had WMD? Satellite pics of milk factories.

Perhaps in Brussels NATO can ask itself a few questions.

2.      Given that NATO is a supra-national organization with executive power over the internal budgets and foreign policies of Member States, then does this not run against the Constitutions of the same States?

3.      Why do the citizens of the Member States have to support a budget of 1.2 trillion USD a year without being consulted? Is this democracy or dictatorship by a lobby? How many of the citizens would vote for the continuation of this club for arms dealers, those who make a living out of creating the tools of death and destruction of civilian structures?

4.      The last time NATO forces got involved with Russia was in Georgia in 2008. The result was that they ran screaming. So when the going gets tough, all NATO ever does is to act like a schoolyard bully, bomb a defenseless victim from 30,000 feet and open the gates for the other lobbies which dictate policy in the West to feather their nests and foster their interests.

NATO is as useless as it is illegal as a supra-national entity, it is based upon lies and criminal and murderous acts of intervention, its leaders are war criminals. The only way it can perpetuate its useless and unwanted existence is by stirring up trouble, dividing families and destroying societies.

Let us be sure of one thing: While NATO exists, after Ukraine, there will be more "Ukraines". Perhaps NATO should act democratically, for once, and ask its citizens whether it is wanted. Personally, I believe most of those living in its Member States can think of many better ways to spend one point two trillion USD every year.

Maybe in Brussels they can put that in their pipe and smoke it.