I began my day watching the video of the beheading of an American photo journalist, James Foley, 40 years of age, decapitated in the most barbaric, depraved demonstration of cowardice I have witnessed in many years. James Foley was not captured because he was an American but this was the reason he lost his life to ISIL, another creation of Western imperialism. 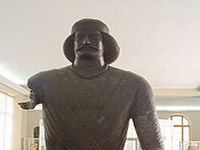 Darth Vader? No, the Spahbod, Surena

Two thousand and sixty-seven years ago, in the year 53 BCE, Marcus Licinius Crassus, the wealthiest man in the history of the Roman Empire, decided to ignore the offer of the Armenian King Artavazdes II, to attack the Parthian Empire (part of modern-day Turkey, Iraq and Iran), through Armenia, offering around 40,000 troops of his own to join Crassus' seven legions. The battle of Carrhae.

James Wright Foley, 40, was kidnapped by an armed gang in Binesh, Syria, on November 22, 2012. A freelance photo journalist, he was making his living by living on the edge, taking pictures in war zones. If he had stayed at home in the USA and not wandered around parts of Syria controlled by terrorists, he would not have been taken but he paid the ultimate price for his audacity.

Whatever the case, the ultimate price for a photo journalist, in no part of the world, can be a decapitation, which is never justified, justifiable or acceptable. In this case, what I witnessed this morning was an act of sheer cowardice, in which a defeated, powerless, unarmed and defenseless man, with his hands tied behind his back, was forced to make an address (probably in return for sparing the lives of other captors) to his family, the American Air Force, who he begged not to bomb the ISIL forces and to his country, ending by saying he wished he was not an American citizen, before having his head cut off by a psychopathic coward hiding behind a mask, wielding a knife in his left hand, and addressing the audience in an accent from southern England (the type of accent one hears, I am told, in the London suburbs of Brixton or Balham).

Crassus (which in Latin means solid, or dense) knew better. He decided to attack the Parthians across the River Euphrates, going head-on into territory which the Parthians knew very well and dominated with their cataphracts, heavily armed horses controlled by skillful horsemen. The tanks of their time. Crassus had seven legions (42,000 infantrymen, divided into 70 cohorts of 600 men, or 420 centuries, each commanded by a centurion), backed up by 4,000 auxiliaries (light infantry) and around 4,000 cavalry. The Parthians were vastly inferior in number, having some 1,000 cataphracts, 9,000 light cavalry archers and around 1,000 supply camels, strategically placed on both flanks and in the center, ably placed by the Spahbod (Field Marshal) Surena, who had an inexhaustible supply of arrows.

Nowhere in any text from the mainstream religions, and this includes the Quran, is the beheading of a photo journalist justified or justifiable. The radical form of Islam which ISIL follows is a blasphemy, an insult to all Moslems the world over and its foot soldiers are nothing more or less than a gang of demented psychopaths, cowards who are happy beheading defenseless and bound captors, raping women and burying children alive.

That said, ISIL (the Islamic State of Iraq and the Levant), or Islamic State (ad-Dawlat al-Islamiyyah) is the result of Western policy.

If the West in general and the United States of America in particular had not created extremists in the Pakistani Madrassah (religious schools), to whip up dissent among the Pashtun in Afghanistan, creating the religious fighters (Mujaheddin) to use against the Soviet-backed progressive Socialist governments in Kabul, which were addressing human rights, women's rights and children's rights, creating a socially progressive and inclusive State, there would be no Taliban today.

Marcus Licinius Crassus had been warned not to attack the Parthians in an open and desert terrain with the Roman legion disposed as it was, each one with 6,000 troops divided into 10 cohorts of six hundred men, and these into six centuries of 100 men, the front line being replaced regularly by the second line, the shield in the left hand defending the man on the left and attacking with the sword wielded in the right hand, while ballista (missiles) were fired from behind the lines and the cavalry were placed on the flanks. The Parthians charged their cataphracts and light cavalry against the Roman lines, firing hails of arrows both high and low, then  retreating rapidly as the Romans pursued, firing the "Parthian shot" over their shoulder, as they withdrew, killing more unsuspecting Romans as they attacked without their shields in position.

If the West in general and the United States of America and United Kingdom in particular had not destabilized Iraq, removing the Sunni-based Government of Saddam Hussein, the country would not have imploded into what we see today, remembering the backbone of ISIL is some of the Ba'athist Sunni forces who supported Saddam Hussein.

If the West in general and the FUKUS Axis (France-UK-US) in particular had not destabilized Libya, removing the Jamahiriya Government of Muammar al-Qathafi, the country would not be living the nightmare it is living today, with rival gangs attacking each other, city fighting against city and a mosaic of fragmentation. This, in a country which enjoyed the highest Human Development Index in Africa. For the USA, NATO and the FUKUS Axis, this matters not.

Marcus Licinius Crassus pressed ahead. After all, he was the wealthiest man in Rome, and in Roman history, possibly in the world judging by today's standards, he was 62 years old and thought he could do no wrong. After all, he had defeated Spartacus, and was Patron to none other than Caius Julius Caesar. The result was the almost total annihilation of Crassus' seven legions, with just a few hundred Parthians killed.

And let us not forget that the policy of the West has been to foment terrorist acts and use terrorism as a means of toppling Governments in Iraq, in Libya, and the failed attempt to do so in Syria, just as in the imperialist past the policy was to identify the second most important power group in a country (the main force outside Government), elevate it to a position of power and then use it as a means to implement imperialist policies (because without outside aid, that group would never have been understood to be the point of equilibrium in that society).

There is a reason why Governments are in power and that is because under the leader, there are groups which keep him/her there, as the point of equilibrium. In Iraq's case, it was the Sunni Moslem group, represented today by ISIL. Saddam Hussein had understood that, two hundred thousand million dollars, and up to a million lives, ago. The West, in its habitual yearning for intrusion and meddling, chose whom? The Shia, the second most important power group outside the Government.

So we can conclude that ISIL is a monster created by Western intrusion. Saddam Hussein did not have Weapons of Mass Destruction, as he himself said. The one telling the truth was President Hussein and the one lying through his teeth was President Bush. Everyone knew so at the time, and the USA and UK were warned. Many times, by Russia, by journalists the world over, by myself. They pressed ahead... and why should people let up now?

As usual, another fine mess those who control foreign policy in Washington and London have created, in their utter wisdom. The way forward is not to gloat over deaths of one side or another - the loss of any human (or animal) life is a tragedy, no mother likes to lose her son, nobody likes to lose a brother, or a father, or a spouse. Tears cast at funerals taste of salt and here we are speaking of the death of James Foley, murdered by a coward with a knife, the death of Iraqi civilians murdered by a coward in the sky dropping bombs from 30,000 feet, the death of Syrian civilians murdered by Western-backed terrorists, the death of Libyan women and children murdered with their breasts sliced off in the street, being impaled with iron rods or gang-raped to death...by formerly Western-backed terrorists. The death of some 100-500 Parthian horsemen and around 40,000 Roman legionaries. They cried back then too.

Finally, how to reconstruct a State which has been clinically destabilized to the point whereby its society has been reduced to rubble? The answer is the further Western fingers are kept away, the better, expect perhaps to finance the mess they have made and allow the members of the societies it destroys to run their own affairs. While NATO countries spend trillions of dollars every decade in their futile and criminal, murderous acts of intervention, there are children in this world without access to safe water or secondary education. The Romans at least tried to civilize the territories they conquered and respected the local authorities, by and large.

James Foley died because he was wandering around a war zone crawling with terrorists backed by the West and because his country failed him by creating the monsters who took his life in such a barbaric manner. The dignity with which he faced his own death, knowing what was about to happen to him and the strength in his voice as he delivered his last words are perhaps the confirmation that he did so having bargained for the lives of other captives and this is something for his family and loved ones to remember in their moment of grief. Whether or not his captors kept their word is another question.

Marcus Licinius died because he made a crass mistake.