Israel's Palestinian policy is a cynical exercise in sheer brutality, primary knee-jerk savagery, a textbook study in stupidity and short-sightedness, does more damage to Jews collectively than the policies implemented in Europe last century and compromises the very existence of the State of Israel. The latest Zionist massacre was a game changer. 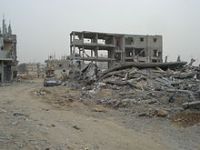 Operation Protective Edge was a classic example of Benjamin Netanyahu's myopia as a politician, his inadequacies as a leader, his ineptitude as a man and his character as a person. Those who knew him twenty years ago refer to him as "The Office Boy". For a good reason it must be.

The disproportionality of Israel's supposed self-defence against Hamas and its rockets shocked the world and lost the State of Israel any friends it ever had, except of course the United States of America and the UK, both with their own issues in international politics (Iraq, Libya, Syria, Ukraine).

Putting things into context, any action from Palestinian groups comes from the background of Israel seizing land from Palestinians who were living inside Israel's borders, forcing them to leave their ancestral lands and homes, and then seizing Palestinian land outside Israel's frontiers, bulldozing homes, taking over orchards and farmland and desecrating cemeteries.

For most people, that would be enough to engender white-faced, fist-clenched, seething hatred. Telling people to leave their homes and seek shelter, and then bombing the shelter indiscriminately, murdering women and children who had nothing to do with the rocket strikes, brings a new dimension to Israel's already infamous callousness, lack of respect for human life and barefaced breach of human rights and international law.

As usual, the USA looks the other way (after all who runs the Guantanamo Bay concentration and torture camp) and the UK continues to sell weapons to Israel. Israel continues to claim it is defending itself against Hamas' rockets when everyone knows the Israeli Iron Dome anti-rocket system is the best in the world and intercepts practically all the rockets that Hamas fires, and Hamas knows that as well. And what was the result of Operation Protective Edge?

Some tunnels destroyed. They will be rebuilt. Some rockets seized. They will be replaced. Some Hamas operatives killed and captured. After Operation Protective Edge, there will not he hundreds of volunteers pouring into Hamas' ranks, there will be thousands. And up to 2,000 Palestinians murdered, over half of these innocent civilians. For most people, that is a game changer.

An intelligent strategy would be for Israel to allow its Iron Dome to do its job, then present its case at the United Nations Organization, the problem with that being that NATO and its war crimes have rendered the UNO to the status of a joke as far as law enforcement is concerned. Whatever the status of the UN Security Council, the hearts and minds of humankind would be with the victim, and few would remember that Hamas fires its rockets because many of its members had their families thrown out of their homes which were then given to settlers.

The stupid strategy was the one Israel adopted. Latin American leaders have come forward with one and the same voice, voicing the feelings in the hearts and minds of humankind, in condemning the Zionist massacres as being totally unacceptable (at least Latin America has leaders worthy of mention, when compared with Europe's cowards terrified of losing weapons contracts, not to mention Mr. Nobel Peace Prize usurper in the White House).

The result is predictable. Campaigns are under way to boycott not only Israeli produce (with Israeli bar codes) but this time around, companies run by Israelis or doing business with Israel. This time around, Israel has lost any moral support it once had and can never, ever again play the victim card when it is clear Israel was the aggressor.

In conclusion, when speaking about Israel and its Zionist massacres, one must remember the thousands of Israeli citizens and Jewish people around the world fighting against Zionism and fighting against this type of policy as being the very worst type of publicity Jews need. The citizens of the international community should remember this and be aware that thousands of Israelis work voluntarily for Palestinian rights organizations, while Israeli foreign policy is in no way synonymous with the ideas and ideals of Jews. A Zionist is not welcome among the Jewish community at large and Judaism and Zionism are by no means one and the same thing.