Some home truths need to be brought out at the very beginning here. It's obvious to even the most prejudicial observer that the west wants to draw Russia into a war. The overt campaign began when the democratically elected government of Ukraine, with Viktor Yanukovich as its President, was overthrown by right wing ultra nationalist, fascist forces in a false flag operation. They falsely accused Yanukovich of "attacking his own people" when it was the Maidan fascists who were attacking people. 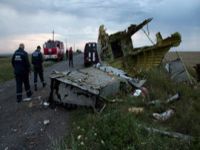 The insipid Victoria Nuland was shown hand picking US trained stooges to take over the reigns of government in an unconstitutional, illegal coup d'etat. Since that time, various US persona have gone to Kiev to instruct their agents on what to do. The main task the US has given their stooges is to ethnically cleanse the former Southeast area of the country, whose votes for independence have sentenced innocent civilians to daily attacks by Kiev with military hardware.

Let there be no mistake about Crimea either. The vote for separation from Ukraine was held by a referendum and the people overwhelmingly voted for Russia to protect them from the murderous Kiev regime. Currently, Crimea is the only area of former Ukraine enjoying peace and well being. History tells us that Crimea was always a part of Russia.

Ukrainian Soviet leader, Nikita Khrushchev, without consulting the people who live there, handed over control of Crimea to the Ukrainian Soviet Socialist Republic. After the dissolution of the USSR, no legal borders were ever declared by Ukraine and, by international law, Ukraine must have the approval of neighbors, including Russia, to establish their borders...they never bothered with this necessary formality. Yet the west constantly lies and says that Russia "annexed" and/or "invaded" Ukraine, when no such thing ever happened.

Now these criminals in Ukraine have been attacking civilians on a daily basis with heavy military hardware, shelling civilian areas mercilessly, killing children and destroying homes, schools, hospitals, orphanages, vital infrastructure such as electrical and water plants. They have created a humanitarian disaster with deliberate malice and forethought, while blaming Russia for this campaign of Genocide and ethnic cleansing.

Leaders and media in the west are doing everything to support this murderous campaign and cover it up. Everything Kiev does, Russia gets blamed for. Russia is not controlling nor supporting Novorossiya freedom fighters, even though freedom fighter leaders have repeatedly asked Russia to help intervene to stop the killing or to help them defend themselves. Yet the west blames Russia for the fighting and instability.

The murderous Ukrainian Army and National Guard have been getting badly beaten as of late, as the heroic defenders of the people have put up nothing but an admirable and inspirational fight against this imperialist attempt by proxy to plant themselves on Russia's doorstep. It is sickening how US neocon scum, especially Barack Obama, cynically complain of Russian involvement in Ukraine. What about US involvement???

Those who support this Genocide, the US-EU-Nato, should stop shedding crocodile tears when a civilian aircraft is downed. They are the ones whose support to the Kiev fascists made this tragedy possible and even inevitable. No better way to start trouble than a false flag operation. Their track record speaks for itself.

Therefore, if the self-proclaimed international community wants to get to the truth, an immediate demand should be made that the Kiev junta turn over these recordings for examination. Any refusal to do so, any tampering or continued hiding, will be a clear admission of guilt. What are you hiding, Kiev?

"Witnesses who watched the flight of the passenger aircraft Boeing 777, watched a gunship attack by the Ukrainian Air Force. Afterwards, the passenger plane split in two in the air and fell on the territory of the DNI," - reports the press service of the People's Republic of Lugansk. My comment: why did the plane divert its flight path? Another point: the plane was attacked way before it got into the territory of the freedom fighters. There were plenty of witnesses.

Vladimir Putin was one of the first world leaders to call for a thorough and impartial investigation, contrary to western/junta liars. Here is the statement made by Mr. Putin:

You know that a terrible event occurred today in the sky over Ukraine, an awful tragedy -- a civilian plane was downed, and 285 people, according to preliminary information, were killed.

On behalf of the Russian leadership and the Russian government, we express condolences to the bereaved families, the governments of those countries whose nationals were on that plane. I ask you to honor their memory.

(A moment of silence)

In this regard, I want to note that this tragedy would not have happened if there was peace on this land, if the military actions had not been renewed in southeast Ukraine. And, certainly, the state over whose territory this occurred bears responsibility for this awful tragedy.

I have already given instructions to the military departments to provide all necessary assistance in the investigation of this crime. And I also ask the government of the Russian Federation through the available civilian agencies that have the capability to do everything for a thorough investigation of this event. We will do everything -- everything that depends on us, anyway -- in order that the objective picture of what happened is part of the public domain here, in Ukraine and in the rest of the world. This is an absolutely unacceptable thing, and no one has the right to let this pass without the appropriate conclusions and without all of us having objective information about the incident."

"The United States on Friday began building a circumstantial case against Russia for the downing of a Malaysian airliner, as Russian supplies of sophisticated weapons to Ukrainian separatists were 'not an accident.'" Confirming widespread reports of preliminary U.S. conclusions, Obama said the plane "was shot down" Thursday by a surface-to-air missile fired from separatist territory."

Now how does this all-knowing self-proclaimed "god" come to these erroneously foolhardy, precipitous conclusions without any evidence whatsoever? This idiocy is also being repeated ad nauseam by all western media and all western leaders. It is shameful and disgusting how Mr. Putin is wrongfully being demonized and blamed with absolutely zero evidence. But that never bothered these filthy psychopathic sociopaths with neither morals, nor conscience, nor honesty.

What is Barack Obama's motive for "building a circumstantial case" against Russia? Why is this, excuse my French, filthy demonic bastard targeting Russia? He comes right out and says what he is up to. He no longer has any shame about how he has caused war and destruction, terrorism and fascism throughout the world. He is a duplicitous hypocrite of the highest order. The only conclusion that can be made is that he is itching to involve Russia in a war, a war he desperately needs to cure his economic shortcomings as a "leader" and to cement US world domination.

More and more evidence at the site points to an air-to-air missile, not a surface-to-air missile as being responsible for the downing of the Malaysian plane. We shall see.