Despite the unprecedented peak of some twenty-five million viewers watching the 2-2 tie between the USA and Portugal at the 2014 World Cup venue in Brazil, average soccer viewing on US TV is way below the figures registered for American Football, Baseball, Basketball or Ice Hockey. Let us see why... 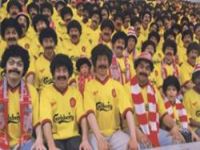 Mrs. Browne, somewhere in the United Kingdom, used to be a happily wedded housewife until one sunny June day during a World Cup match between England and the Kyrgyz Republic (which England was losing 3-0), when her dutiful and diligent, obedient hen-pecked, church-going little husband transformed into a foul-mouthed lout, and suddenly sprang up from his seat and snarled "That was a F***ING penalty!"

What shocked Dorothy was not so much the ferocity of the shout, or its volume, but rather, the intensity of the hatred on hitherto peaceful Peter's face, baring canines which seemed larger than the dog's, his eyes bursting from their sockets as he pumped the air with clenched fists and projected droplets of dribble as he questioned the referee's father's sexuality, questioned the orifice from whence the linesman entered God's world and questioned the opposing player's mother's behavior. Hardly in line with Peter's Deuteronomy readings on Sundays...

Perplexed as to why Peter had never shown such energy in bed, things would never ever be the same between Dorothy and Peter, especially after he hurled his beer glass at the TV and broke the screen.

But things were not limited to the Browne residence. There were stories of the fan who sold both his kidneys (he was told he had four) to a Kosovar Albanian doctor so that he could buy tickets for the Germany and Italy matches, which cost 15,000 dollars each, then died before he could get off the plane. His friends described him as feeling "gutted"...

Let us spend a day in the life of the World Cup...

9.00 Nils Svenson calls a press conference before his country's game with Australia. After a two-minute silence to find his words, looking at a fixed point straight ahead of him, punctuated by an intense look on his face as he cleared his left nostril, holding the right, then after blinking hard, cleared the right nostril, holding the left, then spitting, in a dull monotone, he barks:

"I am going to work hard to try and make sure that I am in condition to be one of the options for the "Mister" if he chooses me as a member of the team so that I can make my contribution to the collective effort because winning the three points is what I am focused on at the moment".

10.00 Video footage of the game between Colombia and Turkey reveals that the Latin American player had false packets of blood which he had hidden in his jock strap, and which he smeared all over his face, writhing around screaming on the ground after another player passed by within five metres of him. There was no contact between the players.

11.00 A Netherlands player has revealed that he had the living daylights kicked out of him by all his team members after they caught him reading a book in the toilets. "There's no players ever read no books in this team," the captain said.

12.00 David Benditt, the subject of a tabloid newspaper scam last week in which it was revealed he likes to wear his wife's panties, has claimed the team coach at his Premier League club kicked a football boot into his face after his team lost a game, cutting him over the left eye. The coach has stated that "The boot-room is sacrosanct. Not even our wives should know what goes on in there" and it seems Benditt is heading out of the club after the World Cup.

14.00 Luis Santiño is to be forced to wear a Hannibal Lecter mask whenever he sets foot on a soccer pitch and is to switch the term "meet" to "eat" when he shakes hands with an unknown person: "Nice to eat you". He is appealing against the decision because this is only the fifteenth time he has been caught biting an opponent... after all biting is sooooo gay.

15.00 England striker Justin England, whose elder and younger siblings play, respectively, for the Faroe Islands and Mongolia, has been banned for three matches for spitting at the referee after he refused to stop the game to look for a platinum and diamond-encrusted ear-ring he claims was worth 4 million dollars which had fallen out when he head-butted a little girl who had run onto the pitch. Rumor has it that the piece of jewelry was a worthless plastic fake bought on a seedy backstreet of Bangkok during his team's pre-season concentration.

17.00 The dust starts to settle after a La Liga player was investigated after causing 60,000 dollars'-worth of damage in a bar after being caught in the toilets with a blonde prostitute, defending himself by claiming "We was only...you know... havin' an intellectual conservation, you know...I mean...sort of, you know, ummmm ....a talk, we was talkin' about stuff...an' fings..., you know".

18.00 Suspicions start to arise that the "The Incident" in the Uruguay versus Paraguay game, when a Uruguayan player had his ears torn off and tossed into the crowd, was a figment of production after three Asian betting agencies were found offering odds that it would happen, and sixteen advertising agencies had their campaigns ready for launch immediately after the match, with slogans such as "Ear we go!", "Come ear!" and "Ear, ear!"

19.00 Finally, the entire team of the defending champions, knocked out of the competition after heavy back-to-back defeats against San Marino, the Solomon Islands and Burkina Faso, came to apologize to their fans. All the players had blue tattoos festooned up their left arms, some looked like The Last of the Mohicans, some had shaved half their heads and had weird designs etched into their scalps, all had at least two ear-rings and were bedecked with several gold chains. Most had their left ear glued to a last-generation cell-phone... until the star striker turned round and pulled down his pants, showing a tattoo of a mouse tail disappearing up his anatomy, closely hunted by a cat, bellowing "stick it in here, Germany!"

One journalist remarked: "It looked like the entire population of the local psychiatric prison unit had been emptied onto the street and into the studio"

So just what is it with Americans, why don't they like soccer? Could it be because they are all stupid?