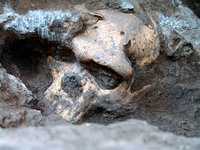 The word genocide, coined in 1944 in an effort to describe what the Nazis called "the final solution" and what today we call the Holocaust, attempted to distinguish the crime of killing people of a certain identity in such great numbers that you tried eliminating them as a group. Earlier in that century, there had been the mass murder of Armenians by the Turks, an event Hitler once cynically reminded associates was not even remembered only a few decades later.

Some would include in the category the terrible starvation induced in Ukraine by Soviet agricultural policies and ineptitude, an event which indeed killed millions, or the ruthless policies of Mao's China which caused many millions of peasants to starve. But these events, utterly nightmarish as they were, begin to lose the legitimate sense of genocide. Although we cannot rightly call these genocides, they remain depravity on a colossal scale, but I am not sure the distinction is one with great meaning, and certainly not for any of the victims. After all, when nations go to war, the job defined for each soldier is to kill as many of the people from another land as possible. Our great wars now typically kill vast numbers, and it is just a fact of history that since the 19th century we have moved from killing mainly other soldiers to killing mainly civilians.

I think it likely there were many genocides through early human history because humans are little more than chimps with large brains, and we know through long-term studies that chimps are quite murderous, making regular expeditions to slaughter neighboring tribes of their own kind. One of the theories for the extinction of the Neanderthals is that they were murdered off by our kind some thirty thousand years ago. Recorded human history, not counting archeological digs, goes back less than three thousand years of homo sapiens' half million years or so, and even much of that small fraction of our history is poorly recorded by modern standards of scholarship, but we have so many dark legends which almost certainly point to horribly brutal unrecorded events: ghouls, vampires, monsters, cannibals, human sacrifice, and tales of savage hordes. The Old Testament, thought to have been written largely from 1000 to 600 BCE, itself is rich with tales of mass murder and killing determined by identity, rather disturbingly for a book embraced by so many as God's own word.

There really are few limits to human depravity. The word genocide hadn't been invented yet, but think of Columbus or the Conquistadors wiping out entire native populations regarded as savage. Or think of the centuries of Christianity in Europe in which countless people were garroted or burned at the stake over some turn of phrase in the liturgy. The Crusades over centuries killed whole populations owing solely to their religion, with Popes in Rome having been among their biggest organizers and supporters. The Hundred Years' War, mid-14th to mid-15th centuries devastated Europe. In the 20th Century, Europe thought little of entering a conflict which would kill 20 million over which branch of the same royal family would dominate the continent. Having settled nothing by that carnage, much the same forces about twenty years later engaged in an even greater conflict which would destroy more than 50 million people.

If words mean anything, you might think genocide is a word that would never be carelessly used, but it is, and quite regularly. Indeed, few words today are more abused than genocide. When relatively small groups of people are killed ("small" in the scheme of things - after all, we are discussing mass killings) in places of interest to the West (i.e., Serbia) where war or civil war is underway, the killings are frequently characterized as genocide by our politicians and their faithful echoes in the press, trying to squeeze out every last possible bit of dread and horror from audiences. There was a large effort in the early part of the last decade to sell the conflict at Darfur as genocide, but I suspect it actually closely resembled primitive wars from the early times of human history.

When a million or so people are killed in places of little interest to the West (i.e., Rwanda), it is ignored in all but words, the sensational stories used to sell newspapers and books and juice-up television's talking-head shows after the fact.

We have had several unmistakable genocides in the last fifty years, and, regrettably, not once did America lift a finger to help. Indeed, the United States actually played a role in establishing or extending the circumstances for a couple of these ghastly events, but you'd never know that when American politicians rise to huff and puff about what is happening in a place far away or in a place not necessarily far away but whose government is intensely disliked. And, of course, you'd never know it from the pages of the mainline press, without doing more detective work than most people are willing to do.

We had what everyone agrees was genocide in Rwanda with around a million people killed simply for their tribal identity, with further destructive aftershocks in neighboring states for some while after. The United States' government, immediately well aware of what was happening there, simply refused to allow the word to be used in its internal communications, and the cowardly Bill Clinton avoided the rhetoric he employed on Serbia, a place where mass murder came in at literally one percent the rate of Rwanda.

We had genocide in Cambodia with perhaps a million and a half killed, and it actually was precipitated by America's de-stabilizing of the once peaceful, but neutral, country with secret bombings and invasions during its Captain Ahab-like madness over "victory" in Vietnam. Neutrality, where America wants something, as it did in Vietnam, is simply not an option. When tough little Vietnam, despite the massive horrors it had just suffered at America's hands, stepped in to do something about what was happening on its border, the United States' government stood back and bellowed, "See, we told you, there's the domino theory at work! We did have a reason to fight in Vietnam after all."

We had a true genocide in Indonesia with the fall of Sukarno in 1965. Half a million people, vaguely identified as communists, had their throats slashed by machetes and their bodies dumped into rivers: it was said that the rivers ran red for a time. Not only did the United States' government do nothing to halt the rampage, officials at the State Department busied themselves with phones late into the night, transmitting lists of persons suitable for the new government's attention, the word "communist" then possessing for America's government about the same power to dehumanize a victim as "heretic" did for The Holy Inquisition a few centuries earlier.

I would argue, too, that America's slaughter in Vietnam was a genuine genocide, the greatest of the post-war period, but even if you do not grant the word genocide in this case, it remains still the greatest mass murder since World War II. About three million were killed, mostly civilians, often in horrible fashion as with napalm, for no reason other than their embracing the wrong economic system and rejecting the artificial rump state America tried to impose. Hundreds of thousands more were crippled and poisoned, and a beautiful land was left strewn with land mines and noxious pools of Agent Orange to keep killing for decades more.

So when an American President speaks to stir his audience with ghost-written words from his teleprompter machine about some new outrage somewhere, trying to cast someone else in the role of demonic villain, we had better always be careful about taking him at his word. And it is a good practice to judge the words, weighing them against the United States' own abysmal record over the last half century.

It is one of the gravest of contemporary truths that the greatest modern historical sufferers of genocide, the Jewish people, should be found now treating millions of others in brutal and degrading fashion, something now continued for more than half a century. Israel hasn't killed millions, but it has killed tens of thousands in its wars and suppressions and their aftermath, including necessarily thousands of children in Middle Eastern populations heavily skewed to youth, and it holds millions in a seemingly perpetual state of hopelessness and degradation and without any rights, a situation America's government effectively has ignored, failing to use its power for good yet again.

It is a natural human tendency to try forgetting our terrifying experiences, and nature does seem to have constructed us with varying abilities to do so, being if you will an extension of "sleep that knits the ravelled sleeve of care." But human perversity is intent on remembering many of our horrors, always citing the provably false slogan about those who forget history being condemned to relive it. Of course, such forced (and cleaned-up) memories have other purposes, as for example keeping each generation of young men ready to grab a gun at the beat of the drums. I feel this keenly every time poppies come up for sale again, much as I sympathize with the old men selling them and much as I'm aware of what occurred in Flanders Fields. It is time to stop sentimentalizing an event too ugly to accurately remember: the stench of the battlefields of 1914-8 and the endless screams of mangled men dying slowly in the mud and the rats eating corpses - these are things no one in their right mind wants to remember, and remembering anything else really isn't remembering at all.

As for the idea of "Never again!" when it comes to human depravity, it is best to remember that the words are just a slogan - as we've conclusively proved over fifty years - and, like all slogans, it is selectively applied to sell something.

Recently we saw some glamorous celebrities, as we have before from time to time, at a large, well-publicized gathering decrying the use of rape in war, and, after a moment's curiosity as to whether they continued afterward over cocktails and nibbles, all I could do was wonder what it was they hoped to do and what audience they thought they were addressing? Armies have always raped, it is one more of the many ugly facts of war we keep out of school books and remembrance ceremonies. War is, quite simply, the end of the rule of law for a time, and because that is a set of circumstances especially attractive to the population of sociopaths and violence-prone people we have always among us, an inordinate number of men who enjoy killing and raping always will be attracted to war. Yes, armies have codes and courts martial, and I'm sure rape is technically illegal in any modern army, but those codes are mainly established for public consumption, being rarely enforced. When you are engaged in bloody war, there is almost no motivation for leaders to pause events for trials. Knowing that, soldiers so inclined will always feel free to rape. Even in peace, we see from the statistics in the contemporary United States' military, rape is quite a problem right on bases and ships. How much more so in war? Why not decry the mass murder we call war in the first place? If there were no wars, there could be no mass rapes. Doing anything less seems a form of cowardice.