The Obama Doctrine: Up Yours! 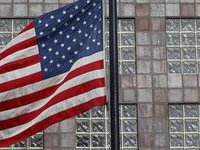 The Defense Authorization Act, and the President's recent speech to West Point Cadets, provides unshakeable evidence that the political-military-corporate leadership learned no lessons from one unnecessarily prolonged war (Afghanistan) and one needless conflict (Iraq). The millions displaced in Iraq and Afghanistan spilling into neighboring countries like Lebanon and Pakistan; the thousands of Americans and civilians killed, wounded or collateralized (with families left adrift); the creation of failed states in Syria and Libya, and the scam that is the "promise to American combat veterans" to take care of them upon return to an increasingly dilapidated homeland are all mere lint to be brushed off the shoulders of America's elite.

In the midst of horrific treatment of former US military personnel at the hands of the Veterans Administration and assorted military programs--and the fact that America's political and military leaders never prepared its warfighters or its citizens for over a decade of war in Iraq, Afghanistan and "on terror"-this statement from the US Congress is totally hollow. "The committee remains committed to providing America's warfighters, veterans, and their families with the care and support they need, deserve, and have earned. This bill would authorize an extension of a wide array of bonuses, special and incentive pays for the Nation's men and women in uniform."

Heath Ledger's Joker in the Dark Knight was right about "authority." Buck McKeon and his ilk "are all schemers."

The President and his handlers seek to do it all over again this time against Russia and China through the Asia Pivot. There is some sort of weird neoconservative, neoliberal monster that now seems to exist in the form of President Obama (who is this guy, really?). And that means it's "in your face" foreign and domestic policy. American activity in Ukraine serves as the best example of this "up yours" Obama Doctrine.

Up Yours! = Obama Doctrine

The Obama Doctrine narrative goes something like this: "Yeah, so we are going to brazenly assist in the overthrow of Ukraine's elected-though controversial president--with help from Brown Shirt fascist groups and the CIA and assorted NGO's. Our senior US State Department officials and senators are going to openly serve tea and crumpets to coup supporters in Maiden Square in Kiev. Once we have succeeded in toppling the elected government (nullifying the prior votes in Eastern Ukraine) we will then rob you of your Black Sea port of naval operations. Next we are going to send our vice president and CIA director to provide legitimacy to our marionettes in Kiev. After that we are going to have US military advisors/contractors assist in designing operations to destroy insurgent uprisings in Eastern Ukraine that oppose Kiev's will. As this US government backed coup is a military operation, military information support operations (MISO) will be required and that means shaping opinion in the USA and Ukraine and the EU, which, in turn means propaganda to legitimize the coup. Yeah, you will try to get your propaganda out but it will not matter. Anyway we will trot out the Hitler ghosts for our purposes and will we get our legacy media outlets like the Washington Post and New York Times to vilify Russia (China too). And do you know what? There is nothing you can do about it. Oh, and for good measure we are going to ensure that member of the world's richest club ascends to the presidency of the new Ukraine amidst a rigged election. And we are going to do the same thing in other countries. Up yours, man."

Forget tribal, realist, idealist, neoconservative and neoliberal theories of international relations. The world is in the midst of some sort of emergent Gang Theory of international relations in which there is no Concert of Nations, or United Nations, but a Gang of Cultures. The USA's culture of violence has made it ideally suited for such a world.

The USA has given the green light to the coups in Ukraine, Thailand and Egypt. In doing so it has remained historically consistent in its debasement of representative democracy, hiding the real agenda.  There was a time when the US government, in collaboration with the mainstream media, could control the flow of information about such coups comparing them to the glorious American Revolution. The Internet and World Wide Web has changed the dynamic. America's leaders have exhausted their supply of credibility. The world has learned from Assange/Wikileaks; Edward Snowden/Glenn Greenwald; and NSA/CIA whistleblowers like John Kiriakou that the grand brains running America into the ground do so for money, power and market-share--nothing more. The ruthlessness of their buy-sell ideology is plain sight.

For example, note the similarity of the mercenary verbiage of Reuters and the Defense Authorization Act's authors in the US Congress. The 21st Century version of Idi Amin, General Abdel Fattah al-Sisi of Egypt, grabbed the presidency there recently. Al-Sisi led the military coup that toppled the former president of Egypt, Mohamed Morsi. The turnout for Morsi was 52 percent, for al-Sisi 46 percent.

Reuters: "One of Sisi's biggest tests will be the politically-sensitive issue of energy subsidies which drain billions of dollars from the state budget every year. Businessmen have urged Sisi to raise energy prices even though that may trigger protests, or risk sinking the economy. Investors want Sisi to end energy subsidies, impose a clear tax regime and give guidance on the direction of the exchange rate."

US Congress Defense Authorization Act: "This bill would also recognize the President's determination that the Arab Republic of Egypt is progressing in its democratic transition and supports the President's decision to deliver 10 Apache helicopters to Egypt for counterterrorism operations."

In short, pillage Egypt's middle and lower classes and use the money extracted from them to bow before investors and buy weapons ostensibly for counterterrorism. In fact, when the riots over rising food and energy prices take place in Egypt, or Ukraine or Thailand, those US Apache helicopters-and other American made military/law enforcement equipment-- will be used to drive women, children and other protestors from the streets.

Perhaps Ukraine is a window to the future of the USA's Republic-maybe even Thailand or Egypt.

Secret Weapon for Asia Pivot: Diplomatic Functions to the US Military

Phase Zero Shaping, according to the Center for Global Development, can be seen as part of the Pentagon's absorption of US diplomatic functions normally undertaken by the US State Department. The resources and latitude that the Pentagon provides to its Geographic Combatant Commanders is very broad. "The danger in this scheme is that it puts the Pentagon in the driver's seat and threatens to militarize U.S. engagement... Interagency coordination is one thing, but assigning leadership for this integration to the Pentagon is a risky proposition... What the Pentagon is calling 'Phase Zero' sounds suspiciously like what some of us still quaintly refer to as 'diplomacy' and 'development assistance.' Given the Pentagon's massive resources compared to civilian agencies, any 'shaping' activities that emerge...are likely to reflect U.S. military priorities and give short shrift to broader political and developmental considerations. After all, DOD's primary concern in weak and failing states is to build the capacity of local security forces. Whether those forces are under effective and accountable civilian control is a secondary concern," said the Center for Global Development.

The ultimate "Up Yours" just might be saddling PACOM with the US Army's HTS.

At any rate, the Defense Authorization Act--buttressed by Obama's recent West Point speech--has put the world on notice that "The Yanks are coming for your markets and your land!" That, of course, means more coups and, with the US national fear factor dropping, perhaps a false flag operation or two.

The movie Starship Troopers depicts galactic traveling insects fighting against humans for domination of the vast void of space. But one need not go to the movies to understand what a clear and present danger bugs or "invasive species" are to the US Homeland and the US military. The Defense Authorization Act recognizes this. "The committee notes that in the fall of 2013, the coconut rhinoceros beetle, an invasive species to the Hawaiian Islands and Guam, was discovered on the island of Oahu and has been found on Guam since 2007. While it is unknown how the species came to Hawaii or Guam, the committee is aware that a coconut rhinoceros beetle population was identified on Joint Base Pearl Harbor-Hickam, which is in close proximity to Honolulu International Airport. Since discovering the existence of this invasive species on Hawaii, the committee notes that the Department of Agriculture has been leading the effort, jointly with the Department of Defense and appropriate State agencies, to eliminate breeding sites, and monitor and control the spread of the coconut rhinoceros beetle on the island of Oahu."

According to the US Navy's Shipboard Pest Management Manual, the German cockroach is the most common insect on US Navy surface vessels and submarines. They infest kitchen areas and lurk in the dark negatively impacting the morale of the sailors. There are scores of insects, like the Dermestid Beetle, that make their homes on US Navy vessels. Just a subtle reminder from the Earth that the most advanced American technology/weaponry literally has bugs living and breeding in and on it.

So what's the point with "invasive species"? Post-911 hysteria led to a paper in the US Army magazine Parameters discussing the use of insects by terrorists to disrupt/damage daily life in the USA. In that paper (Invasive Threats to the American Homeland by Robert Pratt), prefaced by a quote from President George W. Bush, we learn that "A 1999 study by Cornell University estimated that approximately 50,000 foreign species have invaded the United States since the 1700s, and the number in the last 30 years has increased at an alarming rate."

It is one thing to invest and engage in "pest management" but a war on terrorists and their bugs?"

Such is the warped mentality of American culture reflected in the authors of the Defense Authorization Act and, sadly, President Obama.