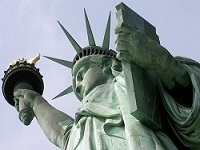 Since the 1990s the world has acknowledged that the United States is the sole global Superpower. The fact is that America already had economic dominance; but when the USSR collapsed that removed it as a military rival.

There are many theories as to why the Soviet Union collapsed.

Some have argued that it was due to the fact that they had tried to keep up with America's defense spending. That strategy sacrificed any chance at building a consumer economy up enough to raise the low standard of living most of its citizens suffered through.

However, other pundits argue that it was due to factors such as the Chernobyl nuclear disaster; the humiliation the Soviet military went through during the war in Afghanistan; and such psychological issues as governmental lying and Kremlin hypocrisy, which caused internal dissonance.

In truth, it was probably all of the above combined that sealed the fate of the USSR. The problem for Americans now is that there are many similar signs, bleeding through the 'smiley face' propaganda that the US government, and corporate media, force-feed them.

Are we today witnessing a similar though different erosion of America? Unlike the 1990s, when the United States had a relatively healthy economy, it now has a massive level of national debt, $17 trillion and counting.

If the US is still the global Superpower, it is more like a bodybuilder on steroids, who has actually compromised his health in order to appear muscular and strong (the cancer comes later).

At this point the country is choking on the strategy it used to run the Soviet economy into the ground. Here is where the bitter lesson of 911 comes in, a lesson that has yet to fully dawn on most Americans:

It does not matter whether you 1) believe that 911 was an inside job or at least the US government was standing down to allow it to happen or 2) buy the official version of events.

Either choice ends up at one final conclusion - the military/intelligence communities completely failed to do their primary job.  The main task of the military is to protect America from foreign invasion.

In time that fact will bleed through the different theories and bitter debates still raging. This author maintains it already has on a subliminal level, and the US government is doing all it can to contain the mounting psychological distress of its citizens.

After all, Bush used 911 to invade Afghanistan, ironically enough, and then the deception that Saddam was hiding weapons of mass destruction as a pretext for invading Iraq.

Sounds a lot like sly (Boris & Natasha) Kremlin propaganda techniques, which the mainstream media funneled \straight from Washington DC mouthpieces to the people. But these days those old, tried and true tricks, do not work as well as they used...at least not for very long....

The Internet, and the proliferation of alternative news media sites, as well as the ability of each of us to instantly access foreign media sources to see what they have to say, has given false flag ops and propaganda short half lives.

US citizens, at least those than care enough to inform themselves of the facts, know that the US government has treacherously deceived them many, many times. It goes back to the Tonkin Gulf false flag; MkUltra CIA mind control ops on American citizens; and lately NSA spying revelations, to name but a few obvious examples.

They also know that the massive debt was caused by Bush's tax cuts for the rich, coupled with the financing of two wars: falling revenues expanding military expenses= fiscal hemorrhaging.

In essence, America is now in the kind of psychological dissonance that the citizenry of the USSR were in prior to Empire-meltdown. The government's approval rating and credibility are at all time lows. But the foregoing is really only the tip of the iceberg that the ship of State is running aground on, in the late great United States.

There are a cluster of social and economic issues that are screaming that Rome is burning, but Washington like the Kremlin in days of yore, is playing Nero's fiddle on the White House.  "Oh how wonderful it is to be the world's Superpower", the leaders of the free world are chanting...

But then there is the unfortunate side effect of the death of the middle class that one must explain away, while the downsized hold their noses. Yes, that bodybuilder looks like a young Hercules only his doctor knows that his internal organs are those of a 70-year old.

Next, the explosion of the food stamp rolls to an alarming 50 million. Imagine the richest nation in the world having that many people without enough money to buy food for the month. Could it be because the only consistent economic trend that sociologists-economists can find is the concentration of wealth, and power, in fewer and fewer hands.

The situation is far more extreme than even US critics seem to realize. "Just prior to President Obama's 2014 State of the Union Address, media reported that the top wealthiest 1% possess 40% of the nation's wealth; the bottom 80% own 7%. The gap between the top 10% and the middle class is over 1,000%; that increases another 1000% for the top 1%...(Wikipedia)

The author contends that this simply means 1) the monopoly game is over and 2) the US is now the world's largest banana republic Superpower; he therefore refers to Obama as El Presidente in private conversations with understanding friends.

American's are waking up, albeit slowly, to the disturbing reality that the real country they live in is nothing like the (idealized) one Hollywood (TV) writers and Washington DC pundits portray.

Every year, on average, from 12-13,000 US citizens are murdered, a staggering, embarrassing fact since that number eclipses the total number of murders that occur in all of Europe annually.

This means that over the past 10 years about 120,000 Americans have been murdered in their own country by fellow citizens. That number exceeds (more than doubles) all the US soldiers killed in foreign wars all the way back to Viet Nam. Would it be too radical to say that the real war is happening at home?

Additionally, The FBI estimates that there are 2 million members of various street gangs across the United States. That equals the number of active duty personnel in the American military. There are also about 2 million inmates in America's prison system, a number that far outstrips other countries, even those with much larger populations.          (CIA Factbook)

As alarming as the foregoing is, we are by no means done diagnosing the decline and fall of the United States. All of the above creates massive psychological dissonance in a population constantly told, as Soviet citizens were, they live in the best country in the world.

'Oh yes, the cheerleaders scream...you have it made, with more freedom, prosperity, democracy and justice than any other nation has even known, rah, rah...' Then on we go to the next war and financial collapse.

But then there is the troubling decline of America's infrastructure that makes one wonder. In their 2013 report, the American Society of Civil Engineers gave the country's overall infrastructure, roads, bridges, dams, the electrical grid, nuclear power plants, etc., a D+ that is a failing grade just short of imminent collapse if under-investment by Congress continues.

To correct the situation, they estimated that by 2020 lawmakers had to come up with $3.6 trillion! Where is congress going to find that kind of money in the current fiscal crisis, buried under a mountain of debt, having to fund mounting social security rolls, the Superpower, on steroids, military budget and healthcare to boot?

Time to start posting your farewells to the Late Great United States....