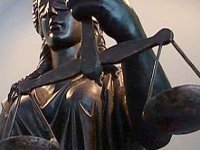 Regular readers of my columns in Pravda.Ru over the past ten years have undoubtedly noticed two primary theses.

The first thesis states that America's judicial system is perhaps the most important branch of government in a "check-and-balance" system.

Unlike the legislative and executive branches, which (at least theoretically) are beholden to the will of the voters, the judicial branch was created to protect and defend the rights of the individual against government oppression and the "tyranny of the majority."

The second thesis states that most of the world's conflicts do not emanate from the primordial struggle between good and evil, but between evils that are considered to be "acceptable" and "unacceptable," usually judged by one's self-interest.

For example, governments are often quick to criticize human rights abuses perpetrated by those they oppose, yet are often silent about, or even supportive of, abuses committed by their allies.  And, as has been the case with the United States over the past few years, oftentimes governments commit the same abuses themselves that they condemn in others.

Since America's so-called "war on terror" was launched at the dawn of the new millennium, a plethora of judges operating in its so-called "justice" system have abdicated their role in the "check-and-balance" system, and done nothing more than rubber-stamp the very oppression and human rights abuses the United States Constitution, particularly the Bill of Rights, was created to prevent.

These judges habitually author judicial "opinions" that, individually or collectively, use three specious rationalizations:  1).  They express "concerns" about the constitutionality of the abuses their government is perpetrating, yet still endorse them;  2).  They minimize or dismiss the long-term impact of their rulings;  3).  They feign ignorance or hide behind platitudes like "the need to protect national security" to dismiss cases that deserve to be heard.

Two examples that disturbingly expose the results of these rationalizations are those of Khaled El-Masri, a German citizen, and Jose Padilla, an American citizen.

In 2004, El-Masri was kidnapped, sodomized, shackled, and subjected to sensory deprivation for several months at a secret prison-actions that The European Court of Human Rights concluded was "torture beyond a reasonable doubt"-before the CIA realized it had abducted the wrong man.  He was then taken to Albania and unceremoniously left on a desolate road with no funds to return home.

Yet what happened when El-Masri turned to the legal "system" to hold those who wrongfully imprisoned and tortured him accountable?  The Bush administration pressured Germany into not bringing charges against the CIA agents responsible, and American judge T.S. Ellis III, citing "national security" as an excuse, dismissed El-Masri's civil lawsuit requesting financial compensation, even after acknowledging that El-Masri had suffered injuries deserving of a legal "remedy."

This dismissal order was subsequently upheld by the Federal Appeals Court for the Fourth Circuit, and the United States Supreme Court refused to hear the case.

Padilla also attempted to sue his torturers in America's courts after being held in a military prison in South Carolina for over three years as an "enemy combatant."  During that time, he was allegedly subjected to sleep deprivation, shackled in stressful positions, drugged, and held in solitary confinement.  He was also not allowed to contact attorneys or family members.

Many believed the outcome of Padilla's case would be different from El-Masri's, especially since a dismissal would essentially give the United States government carte blanche to subject its own citizens to incommunicado detention and torture without fear of legal recourse.

But, in an egregious and myopic, but predictable, ruling, Judge Richard Mark Gergel issued such a dismissal on the ludicrous premise that allowing Padilla his day in court would create an "international spectacle" by summoning many of "America's present and former leaders to a federal courthouse to answer [Padilla's] charges."

As in El-Masir's case, this dismissal was also upheld by the Federal Appeals Court for the Fourth Circuit, and, either oblivious to or supportive of the dangerous precedent Gergel set, the United States Supreme Court also refused to hear the case.

Apparently the Supreme Court conveniently forgot its own ruling in the 1997 case of Clinton vs. Jones, because concerns about creating an "international spectacle" certainly did not dissuade it from ruling that Bill Clinton could be summoned to court, even while serving as president, to answer sexual harassment allegations brought against him.

Padilla also attempted to sue John Yoo, one of the authors of the now infamous "torture memos."  There was a glimmer of hope that the United States government's unbridled ability to torture its own citizens might be restricted when, unlike Gergel, Federal Judge Jeffery White refused to grant Yoo's motion to dismiss.

But, as if on cue, three appeals court judges for the Ninth Circuit-Raymond C. Fisher, N. Randy Smith, and Rebecca R. Pallmeyer-overruled White by feigning ignorance over whether Padilla's treatment had been tantamount to torture.  Not surprisingly, this is also the same court where Jay Bybee, another architect of the torture memos, now serves as a federal judge.

Having worked in the legal system for several years, I was familiar with how ludicrous judicial rulings can be.  In fact, I came to believe (and still do to this day) that America's legal system works harder to rationalize injustice and conceal truth than it does to promote justice and reveal truth.

Still, I'll confess that when I witnessed how callously these judges were eroding the very principles this nation was founded upon, I took some solace in the belief that their consciences undoubtedly haunted them at night.

Then came this revelation:  To be haunted by a conscience, a person must first possess one.

In the past, the words "psychopath" and "sociopath" were often used as synonyms.  Today's criminology, however, has drawn a distinction between the two.

Psychopaths often behave like disturbed individuals; therefore, nobody is surprised when they are discovered to be engaging in horrendous criminal activities.

Sociopaths, on the other hand, function very well in society; therefore, people are often shocked when they are caught engaging in horrendous criminal activities.

The common denominator linking sociopaths and psychopaths is that both of them lack any semblance of a conscience and thus have no empathy with their fellow human beings.  But sociopaths often find legal outlets to assuage their cruel and criminal impulses and are more capable of rationalizing them.

In fact, some scholars have contended that sociopaths might even comprise significant minorities (and some might argue majorities) in the world of law, politics, and business.

Because of this, there should be little surprise when sociopaths become prosecutors, judges, CIA agents, legislators, and even presidents.

I am also certain that the prevalence of sociopathy in America's legal system supplied the impetus for judge Rosemary Collyer to recently dismiss a case brought by the families of three American citizens-Anwar al-Alwaki, Samir Khan, and Alwaki's sixteen-year-old son Abdulrahman -who were extrajudicially executed in drone strikes in Yemen in 2011.  According to a recent editorial by Professor Deepa Kumar of Rutgers University, what made this dismissal particularly egregious was that Abdulrahman, who was targeted two weeks after his father's death, "was guilty of no crime."

In issuing this dismissal, Collyer, in keeping with the rationalizations discussed above, expressed "concerns" about the constitutionality of the American government executing its own citizens without due process of law.  But then, in a statement replete with unadulterated cluelessness, shameless hypocrisy, or just outright dishonesty, she contended that government officials should be "trusted and expected to act in accordance with the U.S. Constitution" when engaging in the extrajudicial executions of their own citizens-a contemptible contradiction since extrajudicial executions, by their very nature, violate the Constitution.

In fact, it could be argued that, under America's felony murder standard, every extrajudicial execution that occurs from the date of Collyer's ruling makes her a murderer, because, under this standard, individuals do not have to actively participate in a murder to be considered guilty; they only have to create the criminal conditions that permit the murder to occur.

And what about the government that Collyer claims American citizens should so blindly place their faith in?  How has it earned that trust over the years?  Below are some examples, and while the list is by no means complete, it is extensive enough to illustrate the depths of depravity into which the American government is sinking:

1.  An investigation of the FBI's COINTELPRO operation during the 1970s revealed how the Bureau often fabricated or planted evidence, encouraged informants to commit perjury, and engaged in illegal surveillance and burglaries to harass and falsely imprison political activists, particularly those considered "left-wing."  In some instances activists were even targeted for assassination;

2.  The CIA allied with members of organized crime to carry out the assassinations of foreign leaders;

3.  The Gulf of Tonkin incident was exaggerated to escalate the war in Vietnam;

4.  American soldiers who endeavored to stop the My Lai massacre were condemned and persecuted;

5.  A duplicitous bargain struck after the Watergate scandal resulted in the pardon of its chief architect Richard M. Nixon;

6.  Another duplicitous deal made with Iran during the hostage crisis ensured the election of Ronald Reagan;

7.  Panama was invaded to divert attention from the Savings and Loan scandal that involved friends and supporters of then-president George H.W. Bush;

8.  Iraq was invaded after George W. Bush, Dick Cheney, Donald Rumsfeld, and other war criminals exploited the fears and outrage generated by the 9/11 attacks and disseminated lies about "weapons of mass destruction";

9.  The Patriot Act and the expansion of NSA spying, which, advertised as necessities in the "war against terrorism," were illegally expanded to include crimes other than terrorism and to conduct surveillance against persons not suspected of any wrongdoing;

10.  Torture can now be used against American citizens, and they have no legal recourse to prevent or be compensated for it;

11.  Judicial immunity doctrines have allowed those who blatantly abused and exceeded the authority of their offices to go unpunished;

12.  The Obama administration has refused to prosecute any current or former government official responsible for the creation, implementation, or cover-up of torture and other related criminality, even as its so-called "justice department" rabidly charges and/or prosecutes people who expose this torture and criminality;

14.  Therefore, it's a sure bet that the United States Senate's much vaunted report about the CIA's illegal use of torture and attempts to mislead oversight committees will, if released, generate much "chest-thumping" about how the United States government admits its "crimes," yet result in absolutely no criminal indictments or prosecutions for these crimes.

This is the government Rosemary Collyer is asking us to "trust."

Many people will undoubtedly argue that, when committing these abuses, America's government only targets "bad" people.  Although this article has provided examples of how this has not always been the case, even if it was, such an argument ignores one essential fact:  The legal system thrives on precedents, and those in power incessantly seek ways to expand them.

So precedents that allow a government to torture and/or extrajudicially execute anyone, especially its own citizens, and that provide immunity to the torturers and executioners are dangerous indeed.

The only logical explanation for America's descent from a bastion of democracy, freedom, and human rights into a legalized safe haven for torturers, murderers, and war criminals is that those in power no longer believe the Constitution exists.