As expected, with attention turned elsewhere, military activity increases in Syria where in the latter part of 2013 and throughout 2014, the Syrian Armed Forces have been making gains. There are reports of Turkish involvement with terrorist forces in the north of the country to slaughter Armenians as Western-backed terrorist forces shell a school. 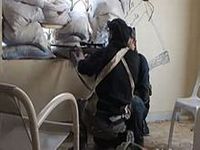 Eye witnesses have reported that Turkish forces have allowed terrorist fighters to enter Syria so that they could perpetrate a massacre of Armenians living in the town of Kasab. The eye witnesses have claimed that Turkish authorities allowed the terrorists to cross into Syria through a militarized border post, a claim confirmed by the terrorists themselves, and attack Kasab on March 21. Thousands of residents fled into the night, leaving their homes before the area was over-run by al-Qaeda linked Jabhat al-Nusra. There are reports that Turkey is actively providing terrorist forces in Syria with artillery and air power. Are these the allies of the USA and NATO in Syria?

Tuesday March 15. Syrian sources have informed Pravda.Ru that in the Damascus countryside, Maaloula and al-Sarkha have been recovered in an operation which took place on Monday. The area lies to the north of the Syrian capital, Damascus, in the Qalamoun mountains on the Lebanese border. Last week the city of Rankus was freed from terrorists by Syrian Government forces

The sheer numbers of Islamist terrorists shipped to Syria by NATO and its Middle East allies means that the Syrian Arab Army cannot fight them all in all places at the same time. However, after an area is sterilized and the vermin infesting it is exterminated, relief forces can move in and help the terrified civilian population. Today videos circulated of a group of Western-backed terrorists on a bus being surrounded and attacked by furious Syrian civilians.

Despite the headway made by the Syrian Arab Army, there continue to be outrages. In Mleha, in the Damascus suburbs, a Mosque was destroyed by terrorist forces and Damascus Police Command has confirmed that there has been a terrorist shelling attack against elementary schools in Bab Touma and al-Dwailaa, Damascus, in which one boy was murdered and 41 others, mainly children, were injured. And the West backs these demons?

With the Syrian Government trusting Russia and removing its chemical weapons arsenal, there are fears that the go-ahead has once again been given by the foreign puppet-masters of the Syrian terrorist forces to start using their weapons again (which Washington claims they never had). The Syrian Foreign Ministry has sent documentation to the United Nations Organization concerning reports which implicate the United States of America and the Turkish Government of being involved in the massacre in Eastern Ghouta on August 21, 2013.

Can NATO and Washington sink any lower than they have?