There must be something in the water at No 10 Downing Street, currently inhabited by Prime Minister David Cameron. When Tony Blair was in residence, the then Prime Minister was guided by his faith and regularly spoke to "his Maker." Last year it emerged that David Cameron has been seeking advice from Tony Blair... 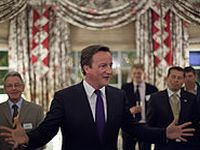 When Tony Blair was in residence, according to the diaries of his former communications director, Alastair Campbell, before the illegal invasion of Iraq, for which Blair's Downing Street offices produced fantasy, fictional, false justifications, the then Prime Minister was guided by his faith and regularly spoke to "his Maker." Blair may have "spoken" - but, as ever, he clearly didn't listen.

Proverbs (6:16-19) rules on six personality traits his "Maker" abhors and seven that are an abomination to Him: "Haughty eyes, a lying tongue, hands that shed innocent blood, a heart that devises wicked plans, feet that make haste to run to evil, a false witness who breathes out lies, and one who sows discord ..." Blair ticks every box, shattering any claim to his trumpeted Christian principles.

False witness is also slammed by King Solomon and in Matthew (15:18-20) Jesus condemns false testimony as defiling to any person.

No, this is not a treatise on religion, but a reminder of the most false of believers.

An early statement from David Cameron seeking votes from, clearly, only the delusional, since Blair left office not so much under a cloud but under a black thundercloud of duplicity and deception, was that he was "heir to Blair."

Later he decided he was more in the mould of Margaret Thatcher.

Judgement is clearly not his strong point. For a swathe of the British electorate he might as well have cited Vlad the Impaler and Ivan the Terrible as role models.

However, last year it emerged that David Cameron has been seeking advice from Tony Blair of whom: "he is very admiring ... he regards as a nice person and has conviction."

There have been formal meetings, seemingly telephone calls on policy issues and cosy dinners in the elegant Downing Street living quarters: "Mr Cameron has been keen to get inside the mind of Labour's triple-election-winning Prime Minister from the start of his leadership."(1)

All a bit worrying, since according to a book written by Blair's political agent of twenty four years, John Burton, his decision to enjoin the attacks in both the Balkans and Iraq were part of a "Christian battle."

"It's very simple to explain the idea of Blair the Warrior", Burton has said: "It was part of Tony living out his faith." Blair's: "Christian faith is part of him, down to his cotton socks. He believed strongly ... that intervention in Kosovo, Sierra Leone - Iraq too - was all part of the Christian battle; good should triumph over evil ..." Also according to Burton, he viewed George W. Bush's unhinged "War on Terror" as a "moral cause" in fighting evil.(2)

Now, as the rhetoric from No 10 becomes increasingly hawkish and belligerent towards Syria, Russia and where ever the US has set its sights, it has to be wondered if Cameron has been stricken with this deviant, extremist, fundamentalist Blair-pox version of religion.

Warning bells might have rung for some, when as leader of the opposition in 2009 Cameron, in a: "set-piece speech ... borrowed the structure of Jesus's Sermon on the Mount."(Bloomberg, 10th April 2014.)

By May 2011 he was recruiting Jesus to his vision of a "Big Society." This is, in fact, a swathe of public service cuts possibly going further than even Thatcher who became dubbed the "milk snatcher" when her fiscal slash and burn even included halting free school milk at State run schools.

Cameron's regime immediately embarked on privatizing education; Britain's one remaining public service treasure, the National Health Service is targeted, as is welfare, even for those with learning disabilities and mental illness - which have resulted in suicides -  with unemployment benefits even in areas with no jobs or transport to travel to them.  Those rushed to hospital in critical condition have had their benefits stopped - there have even been cases of the dead receiving threatening letters for not turning up for interviews at the Employment Service.

Ironically, the mega-rich Cameron claimed the State Disability Living Allowance for his disabled son Ivan and said that without the National Health Service, involving often twenty four hours a day professionals of numerous disciplines, they could not have coped. The Health Service would be safe in his hands he stated before becoming Prime Minister.

Yet at a meeting with Christians in Downing Street he lectured that Jesus had founded the Big Society 2,000 years ago and that: "I'm not saying we've invented some great new idea here."

Clearly pitching for churches and charities to pick up the State services he  was trashing, he added: "One of the best things about our country is that people step forward as individuals, as families, as communities, as organizations, as churches and do extraordinary things... helping to build a bigger, richer, more prosperous, more generous society ..."

The Christian think tank Ekklesia's Director, Jonathan Bartley spoke for many present when he said the brutal cuts affected the poor and the weak -and would not have had Jesus's support. "Jesus's harshest words were reserved for those who had wealth and power and who failed to protect the most vulnerable", he said of multi-millionaire Cameron's policy.

'A senior Labour source added: "We know politicians like a big-name endorsement but this seems to be going a bit far." (3)

Last Wednesday (9th April 2014) at his Easter reception at Downing Street for Christian leaders, Cameron reportedly again claimed divine inspiration when he drafted his key concept for the Conservative Party - he was doing God's work.

After a soprano sang Ave Maria the Prime Minister's address included that: "It is the case that Christians are now the most persecuted religion around the world. We should stand up against persecution of Christians and other faith groups wherever and whenever we can."(4)

No mention of the years of Western-led attacks on majority Muslim countries, where both and all faiths have lived together, shared feasts and grief together for millennia. No mention of divide and rule. But maybe a whiff of a subliminal message, Syria is still on the radar.

Blair produced the blueprint for the excuse for the destruction of Iraq, the country, for believers, where the father of Islam, Christianity and Judaism, Abraham was born at Ur. Cameron surely still has his eyes on the road to Damascus. And Blair, hell bent on a Syria attack is apparently a trusted mentor. One can only speculate, but the increasingly messianic Cameron-speak certainly has a chillingly Blair-like ring.

George W. Bush and Blair, of course shared the same zealot-like brand of Christianity. Four months after the 2003 Iraq invasion, at an Israeli-Palestinian summit in Egypt's Sharm el-Sheikh resort, Nabil Shaath, then Palestinian Foreign Minister, related: "President Bush said to all of us: 'I am driven with a mission from God. God would tell me, 'George go and fight these terrorists in Afghanistan'. And I did. And then God would tell me 'George, go and end the tyranny in Iraq', and I did."(5)

Former Defence Secretary Donald Rumsfeld also played the God card. During the Iraq invasion it fell to him to prepare the top secret Worldwide Intelligence Update: "circulated only among a handful of Pentagon leaders and the President." The: "cover sheet generally featured triumphant, color images from the previous day's war efforts."

On the day after the statue of Saddam Hussein was toppled in Firdos Square on 9th April 2003, the shameful pictures were also accompanied by a quote just below his "Secretary of Defence" cover title. From the book of Psalms was: "Behold, the eye of the Lord is on those who fear Him...To deliver their soul from death."

Rumsfeld's biblical quotes which hallmarked the cover sheets: "were the brainchild of Major General Glen Shaffer, a Director for Intelligence serving both the Joint Chiefs of Staff and the Secretary of Defence ..."

"This mixing of Crusades-like messaging with war imagery, which until now has not been revealed, had become routine. On March 31 (2003) a U.S. tank roared through the desert beneath a quote from Ephesians: 'Therefore put on the full armor of God, so that when the day of evil comes, you may be able to stand your ground, and after you have done everything, to stand.' On April 7th, Saddam Hussein struck a dictatorial pose (on the cover) under this passage from the First Epistle of Peter: 'It is God's will that by doing good you should silence the ignorant talk of foolish men.' "(6)

Rumsfeld and his ilk still stalk the corridors of power in Washington where Blair has numerous connections. David Cameron is now singing their song.

I write as a non-believer, but with huge respect for those with a true faith of all denominations, for the beautiful words and buildings created in love and reverence, in the architecture of the inspired or the simple meeting places, with the reverence palpable within.

To warp the spirit of that wonder, create enemies and a religious "other" at worse and bitter resentment at a lowly best, then whinge: "Why do they hate us?" is not belief, but deviance. Cameron would have been more apt in citing Judas as inspiration than Jesus.

"Beware false prophets", there are some very powerful ones around and these are dangerous times.