The Struggle for Humanity 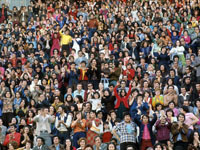 Sociologists, political scientists, activists of various persuasions and many others often describe social stratification in terms of such measures as class, race and gender. There is much talk in the academic and other literature about the working class, the middle class and the ruling class, for example. And about relationships defined by such factors as race, gender, religion, employment, income and other measures.

In contrast, I would like to briefly highlight a measure of social stratification that gets virtually no attention: the social division between those who are sane and those who are insane. At first glimpse, you might think that there is little to discuss here, given that those who are insane are supposed to be locked away in psychiatric institutions or, even worse, prisons. And the rest of us are walking around freely. But it isn't true.

There is a great deal wrong with our world and any psychologically healthy person is able to follow reputable news sources, consult the scientific, economic and other relevant literature when appropriate, and to consider and evaluate the evidence presented in relation to the environment, the economy and society. And take action accordingly.

The most casual perusal of the state of our world will reveal the ongoing threat of nuclear obliteration (on top of the ongoing and rapidly spreading radioactive contamination generated by Fukushima and the use of Depleted Uranium weapons), ongoing phenomenal levels of military spending, and the endless push from corporate and other elite interests for more wars. The global economy is teetering on the brink of collapse and, of course, from the viewpoint of those 50,000 people who starve to death each day or those one billion people who live in a state of semi-starvation and abject poverty in many parts of the world, it has already 'collapsed'. And you might have noticed the ongoing attacks on everything from our civil liberties and right to privacy to our right to eat healthy food that has not been poisoned and/or genetically mutilated.

And if that is not enough to cause you concern, we also have a global environment that is under siege, with the collapse of civilisation now possible within a decade although, hopefully, we will have longer to avert it than this. The climate deniers might be finally in retreat but their backup strategy - to convince us that immediate action is unnecessary because it will be mid-century or even 2100 before civilisation unravels - is now being implemented with vigour. While most scientists are inclined to be conservative in their forecasts of how quickly civilisation will unravel - the Earth is a highly complex set of ecological systems making precise predictions difficult, and reputations and research funding are easily lost if a forecast is wrong - there is a solid consensus that the time to act is now (if not a decade or more ago). Whatever the timeframe therefore (and our timeframe might be limited to just one day if an accidental or intentional nuclear war is launched), the fact is that we are generating a 'perfect storm' as a result of our multiple, massive and unrelenting assaults on the environment which are now breaching one 'tipping point' after another. In this context, it is wise to be conservative in our estimate of the Earth's capacity to withstand this assault. The downside for not doing so is simply too great.

More importantly, from my viewpoint as a social scientist and nonviolent activist, I understand only too well why it is difficult to mobilise people to change and how long this can take. Whatever the physical science says, my research and activist experience convince me that, from the viewpoint of mobilisation, time is very short, particularly given how much we need to do differently.

Despite the overwhelming evidence that we are now staring our own extinction in the face, the global elite is still acting to further concentrate resources in its own hands and to thwart any measure designed to move us in the direction of peace, justice and ecological sustainability. It is time to stop pretending that these people are acting in defense of 'white privilege', 'male domination' or even some 'class interest'. They are insane and have no coherent conception of their own interest, let alone the interest of their children or anyone else if this interest is defined as a life that is lived with integrity, dignity, meaning and fulfilment within an amenable social setting and vibrant natural environment.

Insanity is widely understood to refer to a state of mind that prevents normal perception, behaviour or social interaction; it describes someone who is considered to be seriously mentally ill. And this is an accurate description of the global elite and those who serve it whether they be in political, business, legal, psychiatric, corporate media, academic or other circles. If you want to read more about this, you can do so in these sources, which reference further reading: 'The Global Elite is Insane', 'The Wolves of Psycho Street: America's Economic Enslavement by the Psychopathic Corporate Elite' , 'Chomsky Talks about Psychopaths and Sociopaths' , 'Psychopaths and Sociopaths' and 'Sociopathic Society: A People's Sociology of the United States'  But why are individual members of the global elite insane? For the same reason that anyone else becomes insane: it is the outcome of being terrorised by the violence inflicted on them as a child. For a comprehensive explanation of this, see 'Why Violence?'

Ideally, we should provide appropriate emotional support to these individuals so that they can heal psychologically and become a meaningful member of a community in which solidarity with all life is the hallmark of society, not the compulsive accumulation of personal wealth and the use of (direct and structural) violence to get it. Until this happens, however, we will need to resist their insanity and violence strategically.

So let me tell you what some sane people are doing about our shared problems. They are resisting this violence so that we might all yet have a future.

These people include those ordinary people and grassroots organisations who have signed the pledge of 'The People's Charter to Create a Nonviolent World' thus publicly declaring their commitment to work to end human violence in all of its manifestations. One way of doing this, for example, is to become involved in 'The Flame Tree Project to Save Life on Earth'  which is a simple way for individuals, households and communities to tackle the full range of environmental problems, irrespective of what governments and corporations do.

So far, many individuals and organisations in 65 countries have signed the Nonviolence Charter. Signatories include many prominent people but mainly those (extraordinary) ordinary people, like you and I, who must make the commitment to making a difference if we are to survive. Here are some of these people and their inspirational efforts and organisations.

Marianne Perez de Fransius is the founder of Peace is Sexy in Mozambique which shows the mainstream media how to portray peace 'as sexy, engaging, fun, and possible'; Daniel Dalai is founder of the inspirational Earthgardens  in Bolivia which nurtures the leadership potential of girls; John Seed directs the Rainforest Information Centre based in Australia and is one of the Earth's great rainforest defenders; Ram Dongol works at SPACE in Nepal which envisions 'an inclusive, peace loving and prosperous Nepalese society where all children enjoy equally the positive cultural, social and economic benefits of the 21st century by getting better education opportunity'; Margaret Owen is the inexhaustible Director of Widows for Peace Through Democracy  in the UK which campaigns to 'ensure that widows' voices are heard by their governments, so that every widow [including child widow] is protected by law from discrimination, violence and abuse, and can enjoy her full human rights as an equal and valuable member of society'; Sami Rasouli organises the incredible nonviolent Muslim Peacemaker Teams in Iraq; Sandy Oestreich works with the National Equal Rights Amendment Alliance in the USA which campaigns for equal rights for women ('which is already in place in every nation created since WWII') in the United States; and Rene Wadlow, based in France, is the President of the Association of World Citizens 'a transnational network of women and men working together for a more just world society'.

In summary, humans are on the brink of precipitating our own extinction because a substantial proportion of the population - including all of the global elite and most of its agents - has been terrorised into insanity during childhood. Unless we radically alter our approach to parenting and all of our social institutions so that they nurture, rather than destroy, the genetic potential of each human being, we are doomed to extinction, whether sooner or later. The struggle to save humanity is, obviously, a monumental undertaking. And will require fearless endeavour in pursuit of this objective by those of us who remain sane enough to recognise, acknowledge and act on the problem.

In conclusion, therefore, you are invited to consider this point: Are you sane enough to consider the evidence and to join (or recommit yourself to) the fight for human survival? If you are, then you might like to sign the Nonviolence Charter mentioned above so that we know that you are with us.