Ukraine: A call for responsibility

Calling for the West to act responsibly is arguably the same as asking a bawling drunkard screaming obscenities to be quiet after a skinful of spirits and paramount to requesting a serial rapist to just stop. However, this is no time for quips and very much the time for some skilful diplomacy over early recognition of actors in a Putsch. 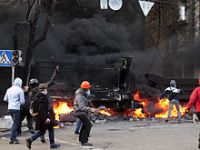 The last week has shown that the Law is only enforceable when it has a consensus to support or respect it. We saw how the kidnapping and illegal detention of Slobodan Milosevic took place against international, Yugoslav Federal and Serbian National law after a decision was made by a fraction of the Parliament, we see a copy-paste of the same situation in Ukraine, where another hasty decision was made by Parliament without the presence of the largest political party.

How then can Washington and the European Union refer to Oleksandr Turchynov as "Interim President" with any seriousness, since he appointed himself and had the decision ratified by an incomplete Parliament without the presence of the largest party? For now, Turchynov is an imposter, the leader of an illegal Putsch which claims power, riding on the crest of a wave of violence perpetrated by thugs, Fascists and agents provocateurs, many from outside Ukraine, most from Western Ukraine. Turchynov may as well proclaim himself King of the Planet Woppo, and there will be the European Union crawling up his anatomy.

If the European Union and Washington wish to recognize the leader of a Putsch as President of a country, then it comes as no surprise, for the EU also negotiates exploitation rights with Morocco for fisheries and minerals in Western Sahara, which Morocco annexed and which it holds as occupying power, illegally.

Recognition of a faction as the legal representative of a country, devoid of any Constitutional or legal foundation, sets a dangerous precedent, and is the epitome of irresponsible behavior which can create a scenario for things to escalate. Had the West acted differently in the case of Yugoslavia, then the Balkans Wars could have been avoided.

What matters in the case of the Ukraine, and fundamentally, is the welfare of the Ukrainian people as a whole, including all ethnic minorities and ethnic groups - otherwise what is the justification for the territorial integrity of the country? And the welfare of all Ukrainians means all foreign powers should be very careful before they jump the gun and start recognizing dubious figures as being the legal representatives of something they are not. So, quite what Catherine Ashton thinks she is doing in Kiev, today, recognizing the leader of a Putsch, defies logic.

While the media is quick to reiterate the words of another self-proclaimed figure, that of Arsen Avakov as "Interior Minister", stating that an arrest warrant has been issued for Viktor Yanukovich for "mass murder of peaceful citizens", let us go deeper. After seeing the images of what gangs of thugs were doing, for weeks, before they started shooting at the police force, then if these are images of how peaceful citizens behave in the Ukraine, God protect us from the violent ones. Arsen Avakov's comments, then, are an insult to police forces everywhere, laying down their lives to keep the peace.

And here is the crux of the matter. Almost one hundred Ukrainians have lost their lives over the last days - students, police, thugs alike - and before the party escalates into a riot, people like Catherine Ashton should be made aware of the Fascist elements among those opposed to Yanukovich. Confirming the status of those from the fringes of politics, such as the "deputy leader" of a political party long in opposition to President Yanukovich, the one Ashton refers to as "Interim president", is more than likely to exacerbate the situation and create an imbalance which can see more violence and this, surely, has to be the first priority as something to avoid.

There are some very dark and dangerous forces in Ukraine, some self-proclaimed racists who have vowed to combat "Russians and Jews", for instance, followers of Fascist movements which were born by Ukrainians supporting Hitler against the Soviet Union. Recognising Putsch leaders and jumping the gun would be paramount to giving Hitler the nod in 1933. And today Jewish leaders advised Ukrainian Jews to leave Kiev.

The Ukrainian people as a whole are resourceful, educated and intelligent and are perfectly able to choose for themselves, under due legal process and Constitutional law - with a properly constituted Parliament for instance - who they wish to represent them.

It is obvious that many of those who are waving banners today have not any idea of the perils of being indebted to the IMF or of receiving European Union bailouts, and have no idea about what will happen if they join the European Union - their jobs will be destroyed, their country colonized by troikas that dictate their policies from Brussels, they will lose their factories, their farms, their fishing fleets.

So, Yanukovich was right to turn more to Russia as an alternative. Whether he was right in how he conducted his internal policy is a question for Ukrainians to answer and nobody else, certainly not Catherine Ashton, but an answer must come from within the law and under the Constitution.

The moral of the story: Recognising a Putsch as a Constitutional exercise in law-making is as sound a decision as appointing a paedophile as a kindergarten teacher. And just as dangerous. Watch this space.