The poisoning of the Pacific: USA in danger?

The alert was raised along the west coast of the USA and Canada some time ago. Now the same symptoms and massive die-offs of animals are being seen across the USA as far as the East Coast. Is there a massive cover-up of the catastrophic effects of Fukushima? How true are the rumors that huge swathes of land will soon be uninhabitable? 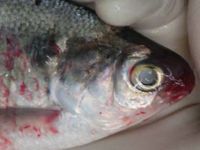 As the clock ticks on after the nuclear disaster of Fukushima, growing evidence is revealed of a catastrophic level of pollution in the entire Pacific Ocean - as far as the west coast of the United States of America, where a mysterious disease is affecting animal life. The symptoms are not restricted to wild animals, neither are they restricted, now, to the west coast.

Looking for an answer? Start at the beginning, more precisely on March11, 2011, with the tsunami after the Tohoku earthquake, causing equipment failure, nuclear meltdowns and release of radioactive material. Continue examining what has happened since then, with the release of 400 tons of radioactive materials into the Pacific Ocean per day, every day, since then, for one thousand and seven days, meaning four hundred and two thousand, eight hundred tonnes of radioactive waste.

Off the coast of Japan, the South-North Kuroshio current and the North-South Oyashio current meet and swing northwards up to Alaska and southwards to California. Could this be the explanation for the horrors mentioned above?

For those still in doubt, what about the strange behavior of killer whales off the British Columbia coast, presenting an unusually high mortality rate and becoming strangely silent, ceasing to communicate? What about the thousands of dead birds found in Oregon? What about the unprecedented mortality rate of barn and violet-green swallows? What about the starfish literally melting and disintegrating off California, off Alaska, off Western Canada and recently off the east coast, off Maine?

What about the same bleeding and alopecia observed in species of animals inland in the west of mainland USA, as rain carried the radiation from the ocean to farms?

What about the answers to some of these questions, based on reports drawn up by scientific organisms but without any official answer from the US authorities? What about the reports of threats and cover-ups?

If it is true that large swathes of the United States of America are becoming uninhabitable, and the US Government is either covering it up or else not releasing official data, how about the US citizens demand studies into Cesium-137 levels all along the West Coast and inland right across the United States of America? How about demanding exhaustive tests on all seafood and fish products? How about demanding exhaustive tests on all animal feed and other products made from fish and seafood derivatives? This is not hearsay or hysteria, aimed at pulling hits for this piece. It is potentially and for all the good reasons, a public health warning. Would anyone trust a Government whose strings are pulled by the corporations which control it to come clean?

Cesium has been detected in salmon, tuna have proven positive for radiation contamination. Hundreds of species are literally fleeing the sea and are coming to the coast, as if they are trying to escape: millions of anchovies, thousands of sea-lions, dolphins, orcas... 28%  of polar bears are displaying the same bleeding symptoms, up to 30% of female musk ox have died out, hundreds of deer have been seen littering roadsides, in Montana. Huge die-offs of moose in Minnesota, moose populations down by up to 70 per cent in Canada.

And now... humans. The Open Journal of Pediatrics is to publish an article on the results of a study involving new-born babies in California. The result is ominous: a rise in hyperthyroidism caused by radiation. The paper is called: Changes in confirmed plus borderline cases of congenital hypothyroidism in California as a function of environmental fallout from the Fukushima nuclear meltdown. Thyroid Stimulating Hormone (TSH) levels for the group of babies born between March 17 and December 31 2011 and during 2012 show a 21 per cent increase in TSH levels, and a further 28% increase in borderline cases, compared to those born before the disaster.

RADCON-5 alerts are already starting to be issued in several large US cities, as radiation levels spike. As everyone knows, radiation does not come and go, it increases and builds up. Some say that by 2015, Hawaii will be contaminated and uninhabitable; others claim the entire west coast of the USA will be rendered uninhabitable by 2017.

Surely it is worth finding out whether this is hype and hysteria devoid of substance, or whether there is some truth in it. Only those with the instruments to measure such things can say, and since they are keeping quiet, what is going on?